Diogo Jota: Why 2019/20 Could Be the Wolves Forward's Breakthrough as a Premier League Superstar

​With two precision through-balls and an unselfish cut back across the goal, Wolves forward Diogo Jota grabbed himself a hat-trick of assists in Thursday's Europa League qualifier against Armenian side Pyunik, before departing just after the hour mark in preparation for Sunday's Premier League opener versus Leicester.

The display was a mere continuation of his red-hot form all pre-season - Jota scored a brace in Wolves' 4-0 thumping of the hapless Newcastle in the Asia Trophy, as well as the opener in a 2-0 victory over Crusaders in the second qualifying round. Pre-season is not the best barometer to predict the upcoming campaign. Darren Bent notably scored 13 goals ahead of ​Tottenham's 2008/09 season, where they infamously accumulated just two points from their first eight games.

Nevertheless, Jota has been majorly impressive ever since Nuno Espirito Santo switched his default formation from 3-4-3 to 3-5-2 in January, allowing the 22-year-old to partner Raul Jimenez upfront, rather than uncomfortably fit out wide.

Despite significant acclaim upon ​Wolves' promotion to the top-flight, having bagged 17 goals and five assists in his sole Championship season, Jota started slowly in the Premier League, unable to find his best form and delving in and out of the starting XI.

A hat-trick of assists from a majestic Diogo Jota!

However, the change in system allowed Jota to magnify his strengths, repaying his manager shortly after with a hat-trick against ​Leicester - Sunday's opponents know all about the livewire...

The hat-trick, in fact, meant that ​Cristiano Ronaldo was not the sole Portuguese player to have scored a hat-trick in the Premier League, and Jota's first international cap is surely around the corner, having ended the season with nine goals and five assists in 29 league starts, an amount that he is on track to improve.

Jota is the perfect foil for Jimenez, a busy and sharp attacker to buzz around the target man who surprised the league last season with his outstanding performances, scoring 13 goals while offering unselfish link-up play. The duo are also particularly threatening on the counter-attack. 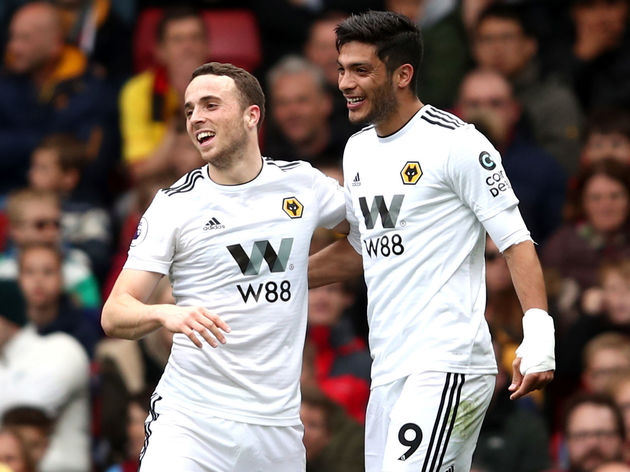 Their potency on the break can be utilised against the top six more so, who leave space in behind for teams to exploit. Wolves beat each of the top six at least once last season in all competitions, despite losing both home and away to 20th placed ​Huddersfield.

Despite concerns over their difficult fixtures to start the season - as well as the additional burden of mid-week games and the travel that accompanies them - Wolves and Jota can reasonably be expected to start well, especially as they have had competitive games to ready themselves prior.

Rather than hindering his progress, the arrival of striker Patrick Cutrone from ​Milan, should lessen the burden on Jota to play all of the European games, or play 90 minutes every week, preventing burnout and enabling him to stay fresh throughout the season. A fan favourite of the Wanderers' faithful due to his tireless running, electric acceleration, accurate finishing with both feet, trickery and vision, expect Jota to establish himself as one of the best players outside of the top six clubs in the Premier League this season.