​Simon Mignolet has completed a move back to his home country, with a transfer to Club Brugge agreed by Liverpool on Sunday.

The goalkeeper returns to Belgium to play for the first time since 2010 after leaving to join Sunderland in the Premier League nine years ago.

Thumbs up, Big Si is in the house 😍👍🏻 @SMignolet pic.twitter.com/q4chRpMPXv

The Reds backup keeper landed in Belgium following the Community Shield before reportedly signing a five-year deal with his new team, securing his future at the club until the age of 36.

Despite having two years remaining on his contract at Liverpool, the Merseysiders have allowed Mignolet to go for just €7m (£6.5m), which could rise €9m (£8.2m) depending on performances related bonuses.

The stopper made over 200 appearances for the Reds and kept goal for their 2013/14 Premier League campaign, where Liverpool were narrowly beaten to the league title by Manchester City.

Last year, he was replaced by Alisson, who Jurgen Klopp signed from Roma for a fee of around £67m - a world record fee for a goalkeeper at the time. Since then, Mignolet has found first-team action hard to come by and made just two first-team appearances in 2018/19.

While valued as a squad player at Anfield, it is understood that the Reds hierarchy sanctioned the move to allow Mignolet to fulfil his desire to play more first-team football.

The move leaves Klopp's side them short in the goalkeeping department, with Alisson the only remaining senior keeper at the club. Loris Karius is still under contract at Anfield, but is currently halfway through a two-year loan at Turkish club Besiktas. 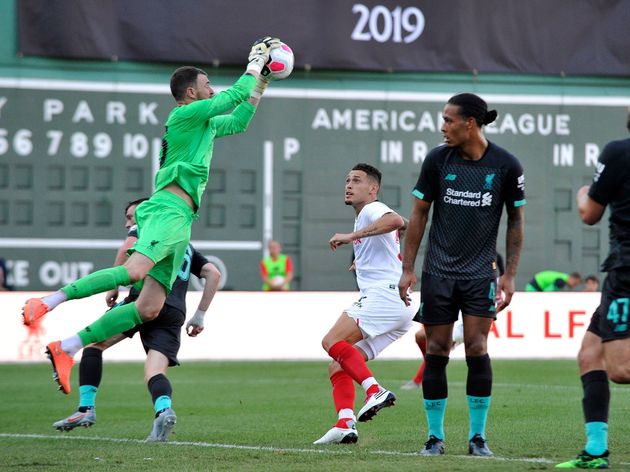 Whilst the Brazilian number one was afforded an extended break over pre-season, Klopp utilised the services of Andy Lonergan, a 35-year-old keeper who spent the second half of last season on loan at Rochdale.

Whilst it is unlikely that Lonergan will be recruited as the full-time backup to Alisson, he remains an option for the Reds as he is currently a free agent.