Tottenham Hotspur's pre-season ended in defeat on Sunday in the International Champions Cup as they fell to Inter on penalties, after the two sides had played out a 1-1 draw.

It took Spurs just two minutes to open the scoring through Lucas Moura, who fired a powerful effort past Samir Handanovic and into the back of the Inter net.

Stefano Sensi then saw a thunderous long-range effort cannon back off the post for the Italians. However, he did manage to get his goal a few minutes later when he found himself alone in the box to slot past Hugo Lloris, making the score 1-1 at the break. 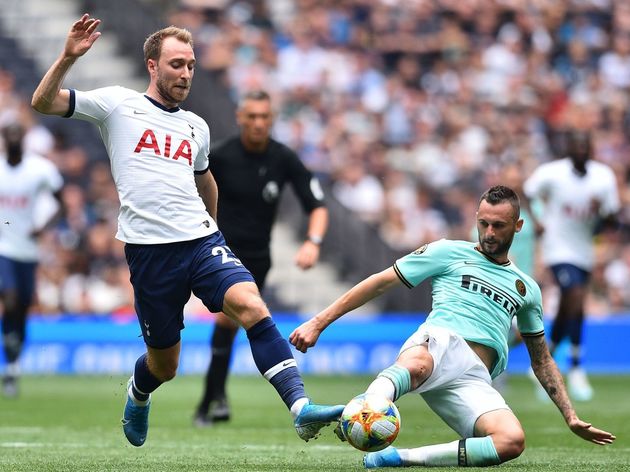 Clear-cut chances were certainly at a premium after the break, and the two sides ultimately needed penalties to decide a winner. Christian Eriksen saw his opening effort saved, but Paulo Gazzaniga kept the score level by denying George Puscas.

The two sides then exchanged successful penalties, until Oliver Skipp saw his effort saved. Joao Mario stepped up with the chance to win the game and managed to convert, giving Inter a 4-3 win on penalties.

With pre-season now over, Spurs' next outing will be Premier League action. Do they look ready for it? On this evidence, yes.

As you would expect by now, fitness is no longer an issue, and the lack of wholesale changes at the club means there are few issues with team chemistry and fluidity. This was far from a perfect performance by Spurs, but they are clearly prepared for 90 minutes of high-level action.

Good performance here now. KWP and Ndombele growing into the game. You can see what Ndombele can offer and it's good. He'll lose the ball and will take time to really get the pace of the game but that talent and ability on the ball from CM is priceless.

Some good minutes for what's likely all starting lineup without further injury..... let's see what these youngsters do to press for a squad place

It took Lucas a matter of minutes to make his mark on the game. He was energetic and lively, but had the substance to make it count.

On the ball, he was electric. ​Inter could not cope with his speed, which helped him create space in the box to fire home the opening goal. He was always moving, looking to find space behind Inter's three defenders.

if this aint screaming @HKane and @LucasMoura7 up front for the season I don't know what is.

His influence certainly faded as the game went on, but Inter were clearly wary of allowing him any time on the ball. He had already proved his ability in front of goal, and certainly could have created more opportunities.

It's still pre-season for Inter, so they don't exactly have to be ready yet. They still have a number of big names to return, but there are still some glaring concerns for Antonio Conte. Their defence was good and their midfield was even better, but the same cannot be said of the attackers.

His 3-5-2 saw young Sebastiano Esposito line up alongside winger Ivan Perisic up top, and it just didn't work. Perisic looked uncomfortable and was largely ineffective as a target man - if only they had someone like Romelu Lukaku.

Sensi equalises for Inter. Still missing that ST up front, Esposito with the assist but a clear step down from Icardi. Inter have to do all they can to get Dzeko as a target man and then play Lautaro in Perisic’s position as the Second Striker. Otherwise, toothless in attack.

I'm sorry but Marotta and Ausilio should be ashamed the squad is in this state this late into the mercato. The deals which have been done are good but leaving Conte with zero options in attack is pathetic.

In the end I hope the winners are Conte and Esposito but it's poor.

With the attackers underwhelming, it was down to Inter's midfielders to lead by example. They needed a big performance from Sensi, and that is exactly what they got.

The 23-year-old was fantastic on the ball, picking out a number of impressive passes to keep his side moving forward. He almost stole the show with his stunning long strike, but got his well-deserved goal to cap an impressive performance.

Must admit I was numb to the Sensi signing. Couldn’t have cared less. Wouldn’t have mattered whether we’d done it or not....but this guy is fast becoming my favorite signing this summer.

Will have an extremely good season, both in footballing terms and on footballindex too.

Definitely one too keep a close eye on.

The season is still young, but performances like this will help Sensi earn a permanent move from Sassuolo next summer.