Manchester City set the tone for the coming Premier League campaign after beating last season's closest rivals Liverpool on penalties after a 1-1 draw at Wembley to lift the Community Shield on Sunday afternoon.

Chances fell for both sides in the opening exchanges but it was City who drew first blood through Raheem Sterling following a training-ground routine from Kyle Walker's set piece. The ball was fed wide to ​Kevin De Bruyne, who headed into the centre for David Silva to flick on for the unmarked ​Sterling, whose effort from close range squirmed under the body of Alisson.

From there on in it was mostly one-way traffic, with the ​Citizens comfortably keeping hold of the ball and limiting the ​Reds to the occasional counter-attack that failed to produce any meaningful opportunities ahead of the half time whistle.

The Reds grew into the game and began finding the spaces from which they hurt their opponents. It looked as though that pressure had told, as Virgil van Dijk's improvised effort from an inswinging corner hit the ground and struck the crossbar, bouncing onto the line and somehow to safety. Seconds later, ​Salah cut in from the right and fired a low effort towards the near post, but he too saw his effort hit the woodwork and bounce to safety. Almost straight up the other end, Sterling had a moment to forget as he dallied in possession when one-on-one and Alisson comfortably collected the ball to deny City a second.

The equaliser did arrive, albeit in unusual fashion, as Van Dijk guided Jordan Henderson's free kick across the box for his central defensive partner Joel Matip to nod home. Naby Keita forced a save from Bravo minutes later with Liverpool very much in the ascendancy.

A rip-roaring finale to the game appeared to have found a winner, as Salah's goalbound lob over Bravo looked destined to nestle into the net only for an outrageous overhead Walker clearance to stun all inside Wembley and force penalties.

Georginio Wijnaldum was the only one of the nine takers to see his effort saved, leaving Gabriel Jesus to fire home and hand City the first trophy of the season.

With all but Sadio Mane left to return from an extended holiday, Jurgen Klopp was able to field an almost full-strength side for Sunday's clash. With the desire to set an early marker for the Premier League season seemingly too good to turn down, he would have been hoping equal measures of commitment from his players. It wasn't forthcoming. Liverpool looked second best in almost every aspect to their rivals in the first half, struggling to gain possession from City and deservedly trailing at half time. An improvement was expected, and it came in in full force as the Reds looked a different animal after the break.

Finding space between the lines and behind the full backs, they opened City up got the goal their performance deserved with ten minutes to go. They were a side transformed in the second half and it appeared only one side were going to snatch a winner.

Some stunning defending from Walker aside, it looked like they were going to emerge victorious. However, while the penalties decided the game, Klopp's focus will be solely on his side's excellent second-half showing. It was a poor showing from Liverpool in the opening 45 minutes, but one player who stood out for Klopp's side throughout the match was Roberto Firmino. While not outstanding, he worked hard for his side in both halves and was lively in possession.

Showcasing a good level of technical ability, despite being away with Brazil for the Copa America, the 27-year-old looked sharp could count himself unlucky to be subbed after 79 minutes.

You don't win all three domestic competitions without reason. 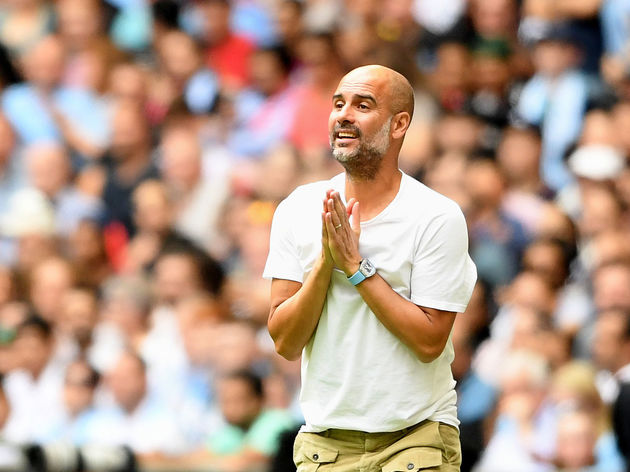 92. @kylewalker2!! What a goal-line clearance that was to deny Salah's looping header from dropping into the empty net. It seems like a summer without football has done the world of good to Raheem Sterling, simply because, he's picked up right where he left off.

Tenacious and determined, a man that was once one billed for great things and Premier League stardom has become that exact player under Guardiola. The 24-year-old didn't give the Liverpool backline a moments rest, hounding whoever was on the ball at every given opportunity and causing problems all game.

7 - Raheem Sterling has now either scored (six) or assisted (one) seven goals in his last four games for club and country at Wembley. Leader. #CommunityShield pic.twitter.com/sw1q8hG1Q3

Liverpool kick off the Premier League season next Friday, aiming to get off to a flyer when then host newly promoted ​Norwich at Anfield.

For City, a trickier task awaits them as they travel to the capital to face ​West Ham at the London Stadium on Saturday lunchtime.