​Borussia Dortmund won the DFL Supercup for the sixth time at the Signal Iduna Park, as they beat Bayern Munich 2-0 in Der Klassiker on Saturday.

After a goalless first half, Dortmund broke the deadlock three minutes after the restart thanks to Paco Alcacer. Jadon Sancho darted through the Bayern defence with a fantastic piece of dribbling, before squaring it to Alcacer, who buried it into the bottom corner to put BVB in front.

Bayern thought they had equalised, but Robert Lewandowski's effort was smothered by Marwin Hitz before Manuel Akanji blocked Thomas Muller's effort. Bayern kept pushing and continued to create chances, but to no prevail as they couldn't hit the target.

Dortmund soon doubled their advantage, as Sancho hit Bayern on the counter attack. The Englishman powered forward into the box, and struck past Manuel Neuer to put the hosts in firm control and wrap up the 2019 Supercup. 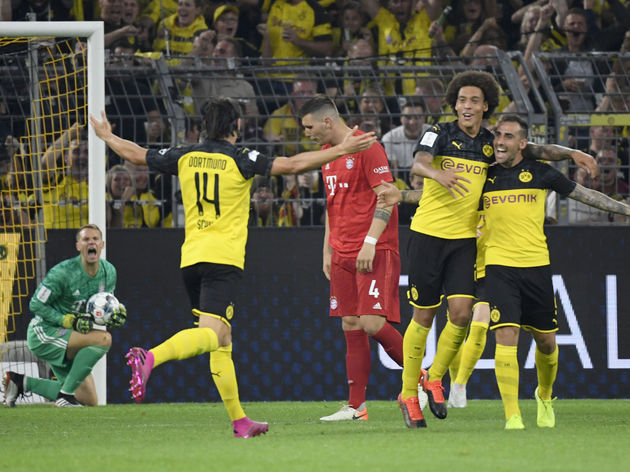 With the home advantage against their bitter rivals, ​Borussia Dortmund started the game on top with a chance inside the opening minute. They cut their Bayern open time after time, but for all their attacking play they failed to open the scoring in a frustrating yet promising first half.

BVB came out for the second half with much more intent, and instantly got what they deserved when Alcacer put them in front. Dortmund were free-flowing and clinical in attack, but their crucially fantastic defensive performance deserves just as much praise in a wonderful win.

Dortmund will be delighted with the win, not only for picking up the first piece of silverware of the season but made even sweeter by defeating their arch rivals after such a humiliating collapse just a few months ago. Lucien Favre's side have continued their form from pre-season, and will be fighting for the title once again this season.

STAR MAN - It was all about Jadon Sancho on Saturday, who stole the show with his explosive second half performance. After a frustrating first half where he lost the ball on a few occasions and misplaced some passes, the south Londoner burst out of the gates after the restart.
Sancho was fantastic at the Signal Iduna Park, wonderfully creating the first goal with some sublime and mesmerising dribbling before ripping the Bayern defence apart with his solo goal. It was a night to remember for the Englishman, who has another exciting season ahead of him. For all of their attacking work and all of their attempts on goal, ​​Bayern Munich were largely underwhelming. They frankly didn't seem up for it from the start, as Dortmund cut them open far too easily and far too often before they took the lead at the start of the second half.

While Bayern had chances, none of them were particularly close. Die Roten tried but certainly disappointed, spending the majority of the night chasing the ball and trying to catch up with the Dortmund attackers who constantly caught them on the counter attack, which proved costly.

It's the worse way possible for Niko Kovac's side to start the season, and it shows that there is work to do. Whether that be through signing a few more players before the transfer window shuts in September or reshuffling the side, Bayern need to fix up before the season starts.

STAR MAN - Credit where credit's due, ​Manuel Neuer did have a good game. Despite conceding twice and nearly giving a goal away as he rushed out to meet Alcacer on the halfway line, the German made a string of excellent saves to keep the scoreline down and BVB at bay. ​Both sides are in DFB-Pokal action next weekend, before they get underway in the ​Bundesliga. Dortmund face third division side Uerdingen in the cup next Friday, before returning to the Signal Iduna Park where they host Augsburg on 17 August.

Bayern must wait three days longer until 12 August to begin their DFB-Pokal defence, when they travel to Energie Cottbus. Die Roten then return to the Allianz Arena to begin their defence of the Bundesliga crown, as they welcome Hertha Berlin to Bavaria on 16 August.