After a successful two-year spell with Paris Saint-Germain, it was recently announced that Dani Alves would be returning to Brazil to play for Sao Paulo.

The Brazilian right-back has enjoyed a ludicrously successful career, winning 40 senior trophies for club and country - a tally which actually makes him the most decorated player of all time.

He's won more than anyone else, Dani Alves returns to the Brazilian league!  https://t.co/hSBbupEc6T

Now 36, ​Alves is unlikely to add too many more trophies to his current tally, which means that attention will be turning to those who may be able to knock him off his perch.

Here's a list of seven players who could end up surpassing Alves' remarkable trophy haul - ranked by the number of trophies currently to their name. Matthjis de Ligt is still practically a baby (if a very large one), but he is on course to become the finest defender in world football and has already earned himself a move to serial winners ​Juventus, which seriously boosts his prospects on this list.

The 19-year-old secured the first two trophies of his fledgling career in 2018/19 as Ajax achieved a domestic double and it would be no surprise to see him replicate his superb form over in Italy. There is no youngster on the planet who holds the same stature as ​Kylian Mbappe, and that's not just because of his seemingly limitless potential. Winning silverware has become a routine for him at this point.

At just 20, the French forward already has eight trophies to his name and, while he remains at Paris Saint-Germain, he is certain to add plenty more to his current tally. He's set for future success on the international scene too, as France remain the team to beat in Europe after their 2018 World Cup success. It's impossible to predict what the immediate future has in store for ​Neymar, but he still has plenty of years at the highest level still to come - and more trophies waiting to be claimed.

The 27-year-old has achieved consistent success with Santos, ​Barcelona, PSG and Brazil and remains one of the most talented individuals in world football. If he does end up staying put at PSG then the trophies will keep on coming, but he wouldn't exactly be harming his chances if he opts to return to Barcelona, either. ​Cristiano Ronaldo continues to stake his claim as one of the greatest to ever play the game and trophies have followed him throughout his career across Europe.

Despite being 33, Ronaldo hasn't shown any signs of slowing down and his presence at Juventus propelled them to their most comfortable Serie A title in recent memory - demonstrating that I Bianconeri's domestic dominance is only set to continue. The Portuguese forward's longevity will ensure that he'll be sticking around for a few more years, so expect him to come close to Alves' record. Potentially the most underrated player of the past decade for Barcelona, Sergio Busquets' time with La Blaugrana has been laden with trophies.

Such is his importance to Barcelona, the La Liga giants are already planning for his eventual departure by bringing in the likes of Frenkie de Jong and Arthur as future replacements. For now, he's still set to play an integral role for Barca and will continue to add to his tally. 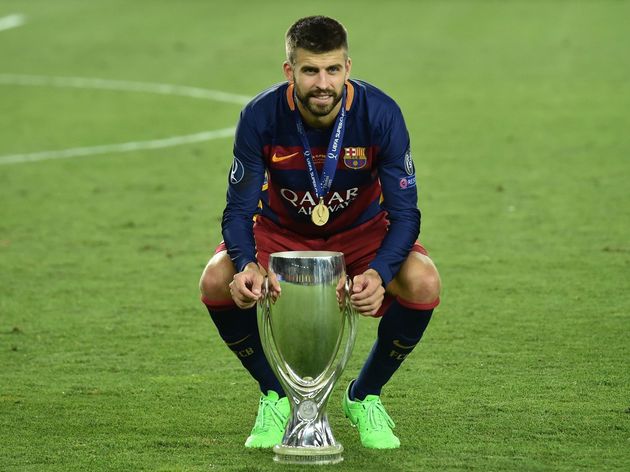 An ever-present at the back for Barcelona, ​Gerard Pique was in resurgent form during 2018/19, demonstrating the fact that he still remains irreplaceable, even with World Cup winner Samuel Umtiti waiting in the wings.

Pique's trophy haul actually began with Manchester United, where he won four pieces of silverware before he made the incredibly successful switch to Barcelona. Seven more trophies and he will catch Alves, which is certainly feasible given the fact that he is still only 32. It would be fitting that the player who is widely regarded to be the most talented individual of all time also ends up becoming the most decorated.

​Lionel Messi is tantalisingly close to Alves record and, given the fact that he is likely to finish his career with Barça, it seems like a matter of when and not if he can catch up to Alves. Given the remarkable consistency Barcelona have been able to achieve in Spain, he may even be able to achieve the feat within the next couple of seasons.