​It has hardly been the summer that Newcastle fans will have hoped for. The mood was so positive when the side ended last season with a 4-0 victory over Fulham, and there was cautious optimism that a takeover of the club would happen during the off-season.

Instead, the Magpies have lost their two top scorers from last season, Ayoze Perez and Salomon Rondon, whilst manager Rafael Benitez also exited and was replaced by Steve Bruce.

Pre-season defeats to Wolves and Preston have done little to change the negative atmosphere surrounding the club, with many expecting Newcastle

Yet Bruce must muddle together a competitive team, and has just over a week to do so before Newcastle's campaign starts at home to Arsenal

Martin Dubravka (GK) - It is not yet a certainty that Dubravka will still be at Newcastle when the transfer window closes as there has been some interest in him. For the moment he remains on Tyneside though, and should get the nod once more to take the gloves after a solid campaign last year. Fabian Schar (CB) - Arguably Newcastle's best defender last year. Can bring the ball out of defence well, a key asset when playing a back three. Also improved defensively, and at 27 he should be coming in to his peak years. Fans will be hoping for another stellar season from the Swiss centre back. Jamaal Lascelles (CB) - ​The captain who looks at home in the Premier League having spent the early days of his career in the Championship. Given Newcastle's pre-season struggles, a lot will rest on Lascelles' shoulders to steady the ship. 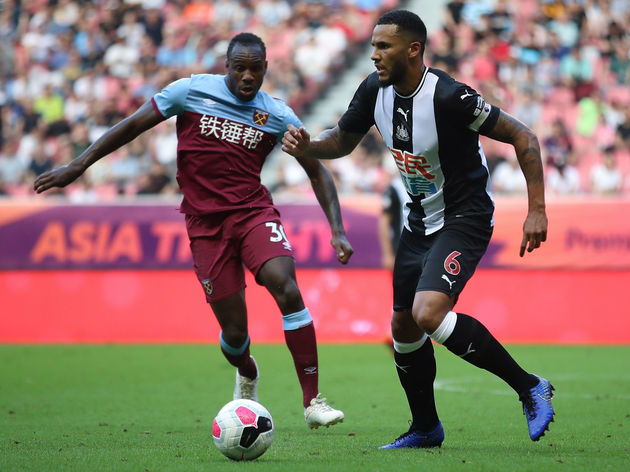 Paul Dummett (CB) - A clear weak area for the side. With Florian Lejeune out having suffered a long-term injury at the end of last season, Newcastle have a lack of quality options to pick from. Bruce will likely look for a left-footed player to balance the back three, meaning a straight battle between Dummett and Ciaran Clark. Based on last season, Dummett should stay ahead in the pecking order. Javier Manquillo (RWB) - The Spanish full back has been widely criticised for his displays since moving to the club. However, he has been one of Newcastle's brighter players in pre-season, and appears to have moved ahead of DeAndre Yedlin down the right flank for the moment. His current form should see him get his chance on the opening day. Jonjo Shelvey (CM) - The 27-year-old struggled to get opportunities under Benitez last season, often having to settle for a place on the bench, whilst also having his fair share of injuries. However, he has established himself as a regular in pre-season, and appears to be returning to form. His passing range from midfield should see him picked as Longstaff's partner in the centre of the park. Matt Ritchie (LWB) - Originally an attacking-minded winger, Ritchie adapted well last season to playing in a deeper role, never shirking his defensive responsibilities. He can also produce qualiy in the final third with his crossing from out wide. A hamstring injury caused him to hobble off during Newcastle's game with Hibernian on July 30, but if he is fit then he will take his place at left wing back against Arsenal. Allan Saint-Maximin (RW) - The French winger has just put pen to paper to join Newcastle, and look set to makes his way straight into the starting XI against Arsenal. Miguel Almiron (LW) - Almiron showed glimpses of what he could do in the second half of last season after arriving from Atlanta United in January. Unfortunately, a hamstring injury ended his season prematurely. He is now back to full fitness, and will be expected to play a leading role this season following the departures of Perez and Rondon. Joelinton (ST) - Newcastle's club record signing scored on his full debut against Hibernian on July 30, and supporters will hope that is a sign of things to come. He may take a while to settle after arriving from Germany earlier this month, but he has already shown signs that he could be a key figure for the team.