Spurs were the sharper team throughout, demonstrating higher fitness levels and more cohesive pressing from the start before edging ahead on the scoresheet.

Their breakthrough came, however, courtesy of a calamitous defensive error from Real, with Kane squeezing the ball past Keylor Navas after Marcelo played the striker through on goal in an attempt to keep Eden Hazard's misplaced pass in play. Real Madrid had their share of the chances - most notably with a Rodrygo goal disallowed for offside - but they were second best and have much to improve on heading into the new La Liga season.

Oh dear. Real Madrid - fresh off the back of a disastrous season in 2018/19 - have made a similarly woeful start to their preparations for the upcoming campaign, with this their third loss in pre-season, having also been defeated by Bayern Munich and Atletico Madrid.
Again, Real lacked the required fitness levels, sharpness and, surprisingly, technical quality to compete. Real Madrid are expected to challenge for the league, having signed Hazard, but on this showing, Barcelona will not fear another Ronaldo-less season from Los Blancos.

STAR MAN - 18-year-old Rodrygo was the pick of the bunch for Los Blancos, causing the Spurs defence problems with his pace and direct dribbling, and was unlucky to have mistimed his run slightly when he snuck the ball into the net from an offside position.

The summer signing from Santos outperformed Real Madrid's big money arrival Hazard, who showed glimpses of quality but looked off the pace overall, with question marks surrounding his fitness levels.

Kubo and Rodrygo are way too good for Castilla.

Did not see it much, but Rodrygo attacking in transition looks really fun. Nothing else really happening. Vazquez has been bad on the ball. Modric and Varane's touches are off. Tottenham press really set the tone early in not allowing the ball-carriers any comfort.

Tottenham manager Mauricio Pochettino will be pleased with his side's display, most notably due to the performances of his entire squad and not just his star players. Spurs have been criticised in the past for relying too heavily on the likes of Kane and Christian Eriksen, with the squad deemed too thin to compete on all fronts. 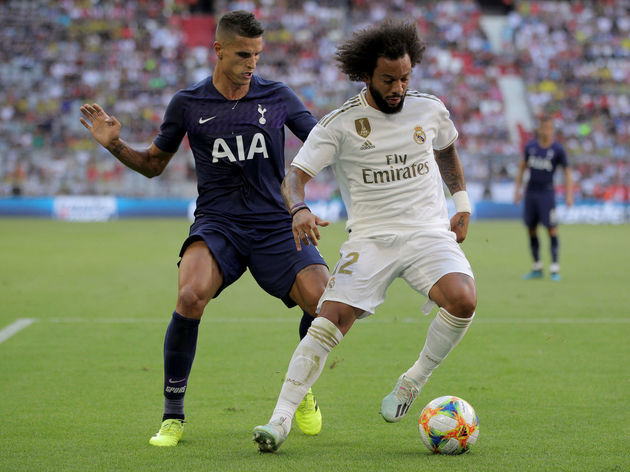 Against Real, however, the entire team performed to a good level, with important players such as Dele Alli, Lucas Moura and Moussa Sissoko only required off the bench, while Erik Lamela also showed his worth to the Spurs faithful.

STAR MAN - Lamela certainly helped his chances of starting Tottenham's opening Premier League fixture against Aston Villa with a dazzling first half display. With Son Heung-min suspended for the first two matches, the Argentine looks to be competing with Lucas Moura for the spot alongside Dele Alli and Christian Eriksen.

The winger has underwhelmed since signing for Spurs in a £30m deal from Roma in 2013 but showed his worth on Tuesday, displaying deft touches on the half turn and precise through balls as he caused Luka Modric and Toni Kroos problems between the lines.

Erik Lamela, when fully fit, is a top player but some Spurs fans are too spoilt for whatever reason to see it.

Lamela casually dribbled past Ramoe, Varane and Kroos as if they're not even there. New low.

The winner of Bayern versus Fenerbahce later on Tuesday now awaits Tottenham, who will contest the Audi Cup final on Wednesday evening.

Real will face the losers of the aforementioned game, before a trip to Austria to face Red Bull Salzburg on Wednesday next week.