With both clubs spending big this summer, there was plenty of new talent on show, but it was only the men in red and white who did themselves proud, as Los Blancos fell to an embarrassing defeat.

​Diego Costa opened the scoring within 45 seconds when his deflected effort beat ​Thibaut Courtois, having been slipped through by new teammate Joao Felix. Schoolboy defending from Zidane's men saw them go two goals down inside ten minutes, as Felix got on the end of Saul Niguez's cutback to poke the ball through the legs of the scrambling keeper.

Diego Simeone's side wasted several chances to make it three, but eventually did so inside 20 minutes when Angel Correa's neat touch and finish from Koke's poked pass beat the helpless Courtois in the opposing goal. ​ 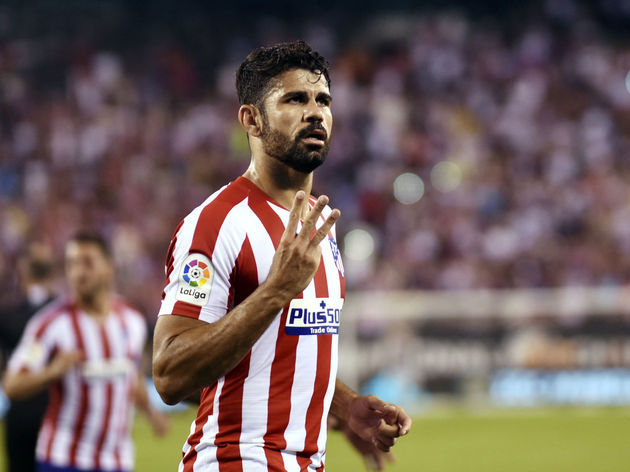 Real did pull one back when ​Eden Hazard's (good move, eh?) low cross went in off Nacho, though in truth the defender knew little about it.

The Diego Costa circus then rolled into town once more, with a needless lashing out at Dani Carvajal sparking a 22-man brawl - leading to a pair of red cards being brandished. So much more for international companionship. 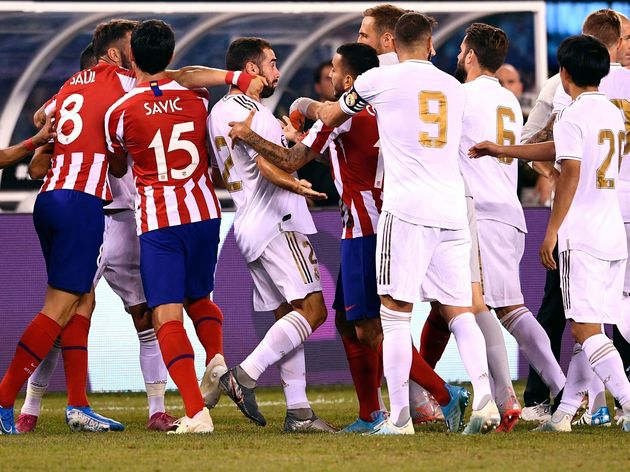 This did not faze Atleti, however, as just a few minutes later Vitolo embarked on a mazy run and finished it off with a fine strike into the bottom corner to make it 7-1.

Real restored a modicum of pride with late goals from ​Karim Benzema and Javier Hernandez Carrera, but it really was a night to forget. Unless you're on Twitter.

Because if you are, it was fun for all the family. Let's start with the Spanish press., renowned for their (not so) measured outlook on things...

The game was played whilst most football fans in Europe will have been asleep, so maybe the neutrals might have a slightly different take.

Whilst most of us slept… Diego Costa scored 4 goals and was red carded as Atletico spanked rivals Real 7 (SEVEN) - 3 in a pre-season friendly pic.twitter.com/eC9l6i7SQu

​​Not much sympathy for Real Madrid there either...but given Zidane's record at the club, you expect that Los Blancos' most loyal supporters will have shown some humility and perspective in the face of this adversity.

Ok, nobody expects that, but let's take a look at their reaction anyway.

Speechless. This is the worst thing I’ve ever seen as a @realmadriden supporter. 5-0 down to atletico madrid at halftime and in all honesty they could’ve scored 7/8. Embarrasing, disgusting. I dont care if it’s pre season or not we cannot allow this. It’s time to go. #ZidaneOut

When we signed Hazard and Jovic, I told you we are at least two midfielders short. Kroos and Modric are too old to be playing together in that midfield, Why we sold Llorente and loaned out Ceballos without any replacement in mind, I'll never understand. #zidaneout. Lol

​​It's not all about Real Madrid, of course. Atleti put in a brilliant display and rightly so, their own fans are dreaming of what this season can bring.

I just seriously can’t believe this. I’ll remember this for the rest of my life.

What an experience, getting to see the club I love destroy our biggest rivals 7-3. At my first Atleti game too. Just... perfection. AUPA ATLETI pic.twitter.com/HLAMK06fsb

​​Nevertheless, most of the football 'Twitterverse' are using last night's match as an opportunity to revel in the misfortune of one of the world's most successful and powerful clubs.

Here's a roundup of the best of the rest that the social media site had to offer.

3-0 lmfao. I thought Zidane was smart when he quit Madrid at the right time. Turns out he is an idiot who overestimated his coaching abilities. He is actually David Moyes with insane amount of luck