Tanguy Ndombele: Why Tottenham's Record Transfer Is the Bargain Signing of the Summer

While a club record signing and £54m fee is hard to justify as a bargain at the surface level, in the transfer market of today, where Tyrone Mings costs £20m and Lewis Dunk is apparently worth £45m, Tanguy Ndombele is a snip at that price.

Aged just 22, he was one of the standout central midfielders in the Champions League last season. A man in demand, wanted by a host of top European clubs.

So if the Frenchman can fulfil his vast and obvious potential, Tottenham have a player on their hands worth double or even treble the value. Regarding ​Tottenham's specific needs, no position in their side was screaming out for investment more than central midfield, where, alongside the full back areas, they have undeniably declined over the past few years.

Victor Wanyama is a shell of his former self, losing almost all of his mobility since picking up a knee injury against ​Chelsea in 2017. Now, he is below academy graduate Oliver Skipp in the pecking order at Spurs.

​Eric Dier, too, has struggled with injuries, and is not the player he was when breaking into the Spurs and England midfield back in 2015.

Harry Winks has recovered well from setbacks and produced fine performances against elite opposition, but has yet to prove himself as a consistent performer over a 38 game league season. Moussa Sissoko, meanwhile, incredibly, after a catastrophic first couple of seasons at the club, was a standout performer for Spurs last season - durable and dutiful, yet still there is an evident technical decline since ​Mousa Dembele's departure last January.

When Spurs were challenging for the league title between 2015 and 2017, Dembele was a standout performer, dominating the middle of the park with his physical presence and close ball control. Ndombele similarly excels in these areas and, excitingly, may have even more to his repertoire.

The Frenchman is a skilful and powerful dribbler, identically to the departed Belgian. In the Champions League last season, he completed 2.9 dribbles per game - the fifth most of any player, and the most of any central midfielder. 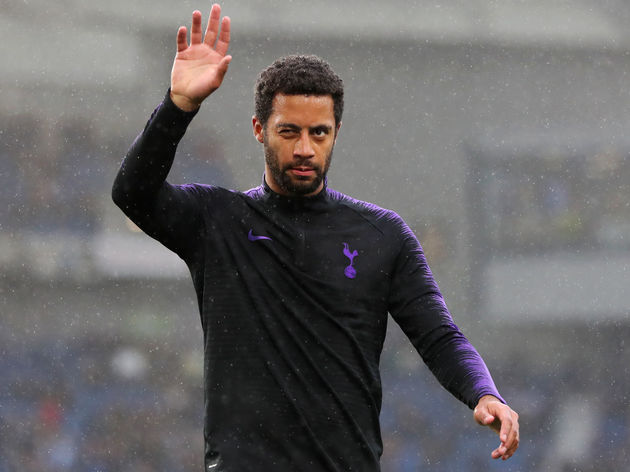 Ndombele also excels defensively. The 22-year-old completed 2.4 tackles and 1.5 interceptions per game in last year's elite competition - higher than both Winks and Sissoko, who have their individual qualities but fail to sufficiently protect their back four; a significant reason why Tottenham's defensive record has worsened.

The former Lyon man delivered these performances, furthermore - not only in Ligue 1, which gets overly criticised - but in the Champions League, ensuring there can be no doubt about his level of class. He produced stellar performances against the likes of ​Manchester City and ​Barcelona,

The area in which Ndombele undoubtedly exceeds Dembele is passing ability, particularly through balls and killer passes to the attackers. While not a goalscorer, he plays with his head up and takes risks with his play, assisting his Lyon teammates seven times last season.

In fact, his first action in a Spurs shirt was a killer past and assist. Having come on as a substitute against ​Juventus in the International Champions Cup, Ndombele picked up a loose ball and waited patiently until Lucas Moura had got goal side of his marker, dissecting a precision through ball for the Brazilian to hammer home.

Promising signs. Moreover, Ndombele could bring the best back out of ​Dele Alli, who has had to play deeper in the past two seasons to compensate for Tottenham's lack of midfield quality. An extra body - and a quality one at that - enables Dele to play behind ​Harry Kane, the position where he scored 18 league goals in 2016/17.

It remains to be seen whether Ndombele will blossom into a Premier League powerhouse but, at only 22, possessed with vision, strength, close control and intelligence, there's no reason to believe otherwise. Guided by Mauricio Pochettino and given the freedom to express himself in an organised and disciplined Tottenham side, Ndombele can be the man to propel Spurs to trophies - in which case he will be worth the £54m fee, and then some.