Fernandes rose to prominence after a superb season in Primeira Liga last year, with his 20 goals and 13 assists helping his side to Europa League qualification. He was also key to Portugal's Nations League triumph, and has been a reported target of Manchester United manager Ole Gunnar Solskjaer for much of the summer. 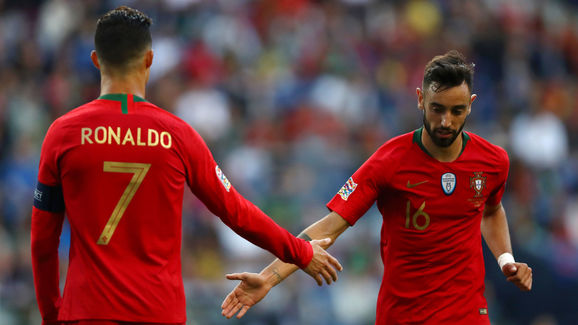 Fernandes was in the Sporting CP side that drew with Liverpool 2-2 in the Reds latest pre-season friendly, and after the game, Klopp gave (via Goal) a complimentary assessment of the attacking midfielder - hinting where he'd rather not see him go.

"If he [signs for Manchester United] then we will face him. He's obviously a really good player.

"They have already a few really good players, so that will probably make them stronger. It's not nice, but [Man Utd's transfer dealings are] not our cup of tea, to be honest." Fernandes opened the scoring for Sporting CP after a blunder from Liverpool goalkeeper Simon Mignolet, which served to remind the Kop faithful just how important last season's acquisition of Alisson Becker was.

The attacking midfielder also played his part in Sporting CP's second goal, as he beat the offside trap to get in behind Trent Alexander-Arnold and set up the equalising strike.

Whilst not directly attempting to push through a transfer, Fernandes has been forthright in his desire to play in the Premier League at some point in his career, previously stating: "I don't care about the transfer market.

"I've talked about this a lot, I don't need to talk anymore. I already said I would like to play in England."

Having already secured the services of winger Daniel James from Swansea and Aaron Wan-Bissaka from Crystal Palace, United boss Solskjaer is clearly intent on freshening up his squad -and Fernandes would be a welcome addition to help ease the creative burden upon Paul Pogba.

However, with just two weeks until the British transfer window closes and Sporting CP president Frederico Varandas placing an asking price of at least £56m on Fernandes, United will need to act quickly and be prepared to spend big in order to bring him to Old Trafford.