Kurt Zouma: The 'New Marcel Desailly' Deserves a Starting Berth at Chelsea in 2019/20

The sad part about Chelsea's current transfer ban is that we can't ridiculously postulate about potential players, and claim right off the bat that they will be the second coming of Diego Maradona or, closer to home, Didier Drogba, Frank Lampard and John Terry.

The good part is that, instead, we can do it about existing players.

Hence why we have Mason Mount in the Lampard role, Tammy Abraham in Nicolas Anelka's corner (his frame precludes him from the Drogba camp), Reece James under the genuinely-I've-never-seen-a-full-back-like-him banner and Jake Clarke-Salter fulfilling the next John Terry prophecy (why he couldn't go the whole hog and join Nottingham Forest on loan instead of Birmingham, I'll never know). Which leaves the man in question, Kurt Zouma, consigned to follow the footsteps of *wait for it* Marcel Desailly. Perfect! I mean, sure, they may be fairly different players, but this is what we do now, and I certainly won't spoil the party with 'reason' and 'logic'.

So, what, you ask, makes big Kurt capable of filling the footsteps, much less the football boots (metaphors are a-mixing today), of such a defensive tour de force?! Well, this stuff.

Cast your mind back to those hazy days of January 2014, when Justin Bieber was arrested for drink-driving and resisting arrest, Paul McCartney and Ringo Starr were reuniting on stage at the Grammy's, Stanislas Wawrinka was winning the Australian Open and, most importantly, Kurt Zouma was putting pen to paper on a £12m deal to leave St Etienne for Chelsea.

Do you remember the hype? I do, but hey, why trust me when you can read the effusive words of Jose Mourinho upon his signature.

'Well done Chelsea'. How often have you heard Blues managers say that? 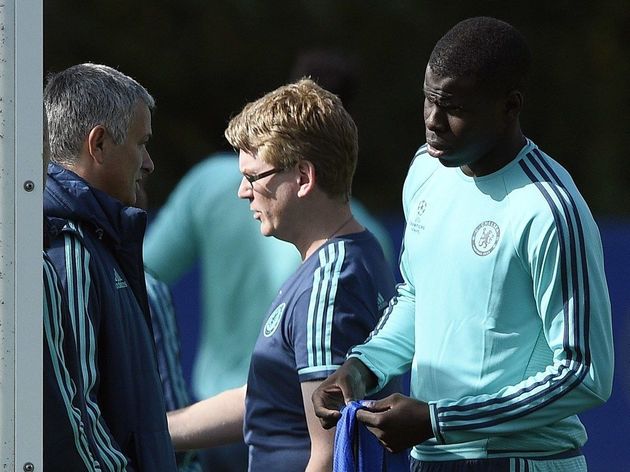 And, after immediately returning to the French side for the remainder of the campaign, Zouma set about fulfilling this potential in west London. Right from the off his Desailly physicality was evident, as was his Terryian scoring prowess, with a goal notched on his debut against Bolton in the League Cup third round.

In the following games a number of other skills became apparent, most importantly the Frenchman's voracious pace and relentless wingspan, both of which set him apart from comparison with any Blues defender in history (you both hate and love to see it).

And it was those qualities that allowed him to make up for the occasional gaffe - an occupational hazard as a modern centre back - so effectively. No one could recover like him, and this made him Chelsea's best defender in the first half of the 2015/16 season and a dark horse to partner Raphael Varane for France at Euro 2016.

As we all know, this didn't happen, thanks to a gasp-inducing (or in media parlance, 'sickening') knee injury sustained following an awkward landing during a Premier League clash with Manchester United at the end of February.

That fall predetermined his fall from the Chelsea reckoning, forcing the club to bring back players like David Luiz and Andreas Christensen and then buy Antonio Rudiger, in turn forcing Zouma to look to Stoke City and then Everton to attain minutes.

The fifty greatest African players of ALL time! https://t.co/v71onfvLuh

Naturally, the biggest doubt after such a serious injury is the recovery of all your athleticism, and it would be fair to say that the Zouma we knew and loved took a while to resurface.

But with hard-fought ​Premier League minutes attained, more and more of those ground-eating recovery runs returned to our screens, and with them those sinew-busting, physics-defying, spread-eagle slide tackles.

And with that came a return to the World Cup-winning French national team, for whom he's turned out for in two of their last three fixtures. And with that came renewed interest from Merseyside to retain the centre half's services.

And with that came a reassuring statement from his new gaffer Frank Lampard, who emphatically declared this month: “In terms of Kurt Zouma, he's a very good defender for us, very good player, very good person and professional.

“I want him here, simple as that. We are competitive with the centre-backs we have in the team and he had a very good season at Everton. I can understand why they want him.

It may only be pre-season but we beat Barcelona! Here's what @WilfredLaurence learned! https://t.co/HrThexar5v

"He's a Chelsea player and I want him.”

And not just because he has a great smile and is clearly a cracking bloke, but because he provides skills that no other defender at the club does, and, in an age where defensive talents are becoming more and more homogenised, that feels like a rare and significant asset.