Ottmar Hitzfeld is number 18 in 90min's Top 50 Great Managers of All Time series. Follow the rest of the series over the course of the next four weeks. You can find Ross Kennerly's Der General career overview ​here.

​It doesn't take much to divide Borussia Dortmund and Bayern Munich fans, but that perhaps

A legend at both clubs, he naturally took charge of some excellent talent, coughing up an almighty best XI from his time as coach. Oliver Kahn (GK) - The German shot stopper amassed 632 appearances for ​Die Roten, and was Hitzfeld's undisputed number one throughout his time at the Bavarian club. Widely regarded as one of the greatest goalkeepers ever, he played an integral part is Hitzfeld's ​Champions League winning campaign in 2001, and remains the only goalkeeper ever to win a Golden Ball award at a World Cup.

Willy Sagnol (RB) - Brought to Bayern in 2000 as one of Hitzfeld's missing pieces, the Frenchman was integrated immediately into the first team due to his immense crossing ability and effectiveness in the final third, as well as defensive astuteness. He too played a pivotal role in their Champions League success in 2001, and is regarded as one of the best full backs of his generation.

Jürgen Kohler (CB) - Both a European Cup winner and ​Bundesliga champion under Hitzfeld, Kohler embodied the style of footballer the German yearned for. Disciplined and hard working, he was became part of the backbone that led ​Dortmund to unprecedented success after Der General took charge.

Matthias Sammer (CB) - Step aside Franz Beckenbauer, well OK, maybe not. But nevertheless, Hitzfeld unearthed his own libero in the form of Sammer whom he transformed from a defensive midfielder into an imperious sweeper. While unfair to single out any one player, Sammer's shift into the role after being bought by Hitzfeld is arguably the key factor in their back-to-back league titles in 1995 and 1996.

Samuel Kuffour (CB) - One of the greatest African players ever to grace German football, his over a decade of service for Munich earned him no less than

Bixente Lizarazu (LB) - Forming part of a devastating pair of French full backs, Lizarazu operated on the left hand side, to provide Hitzfeld with a wonderful balance of stern, no nonsense centre halves coupled with offensive-minded players either side. The Frenchman scooped three consecutive league crowns under the German and scored his penalty in the shootout of the 2001 Champions League final. 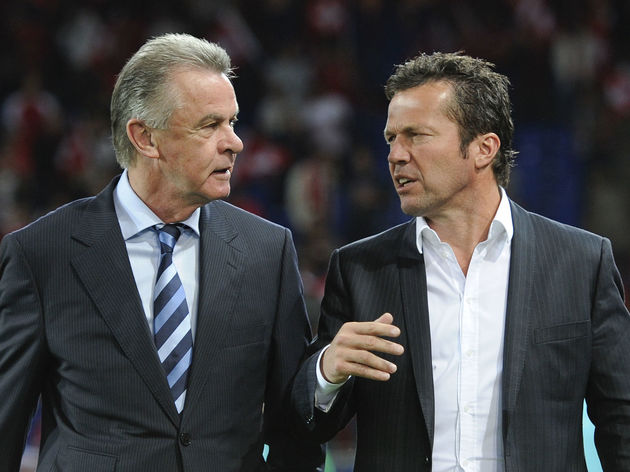 Paulo Sousa (CM) - A player whose talent was abundantly clear during his time with Juventus, Sousa continued to perform on the biggest stage when Hitzfeld brought him to Dortmund in 1996. He only played in Germany for one year, with injuries hampering his game time, yet still started in the all-important 1997 Champions League win before leaving shortly after.

Stefan Effenberg (CM) - Based solely on ability, Effenberg makes the cut. Very much a German Roy Keane, the tough-tackling midfielder amassed no less than 109 yellow cards during his Bundesliga career yet still displayed an immense range of passing and fearsome mentality. He once published an interview in Playboy, which gives you a rough idea of his character.

Lothar Matthäus (CM) - Someone Effenberg has publicly criticised in the past, Andreas Moller (ST) - Known infamously among England supporters for scoring the winning penalty in the 1996 European Championship semi finals and performing that celebration, Moller was also a fine attacking midfielder during his club career. In particular, he shone for Dortmund under Hitzfeld where he operated as behind the striker, although a role upfront he was more than adept at fulfilling.

Claudio Pizarro (ST) - Even at the age of 40, Pizarro is still plying his trade in Germany for Werder Bremen, in what has now become his adopted home. His first spell for Bayern, however, saw him score 100 goals across six seasons and firmly cement his place as Hitzfeld's first choice striker. Together, they won the league and cup double in the 2002/03 campaign.