Ottmar Hitzfeld: The Manager Who Won Absolutely Everything at Germany's 2 Biggest Clubs

Ottmar Hitzfeld is number 18 in 90min's Top 50 Great Managers of All Time series. Follow the rest of the series over the course of the next four weeks.

​Legendary status in football is achieved through loyalty, professionalism and a clear will to do your upmost to those who look turn to you in times of need.

It's a word flung around too often in some facets of the game. However, there are sides who can boast such managers in their ranks, but few rivals clubs can raise their hands and claim that one assertive, diligent German is a legend at mine, and your club.

That is exactly the case in regards to Ottmar Hitzfeld, who ventured over that fearsome line only to replicate - or surpass, depending on your allegiance - his success with the side each respective rival now fears most in German football. I am talking, of course, about ​Borussia Dortmund and

Forging a career as a striker, Hitzfeld spent much of his 13-year playing career in Switzerland, winning the Swiss Super League on two occasions and claiming a Swiss Cup triumph during a successful stint at FC Basel.

Upon retiring from playing in 1983, he quickly assumed a managerial role - a platform where his ambitious and disciplined nature was able to fully flourish.

Starting out at FC Zug, it took just one season for FC Aarau to take note of his style and application, snapping him up as their coach where he secured the Swiss Cup just two years into his managerial career. Naturally, bigger opportunities came by and he soon took the reins of fellow major Swiss club

In just three seasons he led the side to four titles, two in the league, when he began alerting the gaze German football. It was just the beginning for Hitzfeld.

Hitzfeld was about to embark on a path that would change the face of German football history.

His six-year spell with Die Borussen was the longest stint the club had seen until Jurgen Klopp took over the hotseat, but it will fondly remembered by the Yellow and Black army for many years to come.

A debut campaign saw Hitzfeld guide the club to a second-place finish, their highest in the top-flight for 25 years, and an eight-place increase on the season prior. However, with European football confirmed for the following season, Dortmund were unable to balance all their competitions as smoothly, somewhat expectantly having overachieved in Hitzfeld's first year in charge. 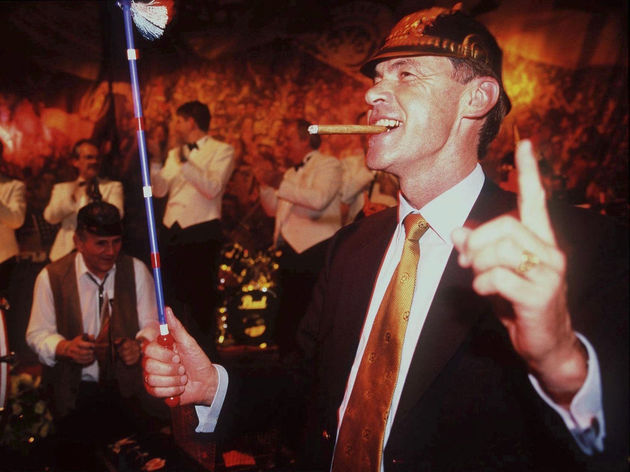 Disappointment was to become the overriding sentiment at the culmination of the 1992/93 term, as a heavy 6-1 aggregate UEFA Cup final defeat to Juventus put a serious dampener on an otherwise revolutionary period for Dortmund that saw them finish fourth in the league.

As is the character of the man known simply as 'Der General', rallying his troops and marshalling them into battle was second nature to the German, as another UEFA Cup run ended in quarter final defeat and a consecutive fourth-placed ​Bundesliga finish.

What transpired over the course of his time in the

The signs were there for all to see. Hitzfeld brought in Paulo Sousa, Jurgen Kohler, Andreas Moller and Julio Cesar as the players he would mould into his, at the time, unusual 3-5-2 formation. He was arguably the first modern manager to

He had taken Dortmund from mid-table mediocrity into the upper echelons of not only German football, but also on the European stage. U

A third successive league title acted as the backdrop for what would be his crowning glory with the club, overcoming Valencia on penalties after a tense 1-1 draw.

He did not have a galaxy of stars, but constructed an unbreakable unit that supported one another through thick and thin, demonstrating

To Bayern fans, however, Hitzfeld is their legend.

It's a debate that adds to an already heated rivalry between the clubs, but one that acts as a welcome point of debate that brought both clubs immeasurable success.

Der General finally laid down his weapons in 2014, but not before cementing his place of one of the finest managers in the history of the game, and one all of Germany, and the world, salutes.

Number 19:​ Bill Shankly: The Innovative Motivator Who Rebuilt Liverpool From the Ground Up