Otto Rehhagel is number 21 in 90min's Top 50 Great Managers of All Time series. Follow the rest of the series over the course of the next five weeks. You can find Jamie Spencer's Rehhagel career overview her​e.​

Nicknamed 'King Otto', he has also led Borussia Dortmund and Bayern Munich, with varying degrees of success, and was awarded Germany's prestigious Order of Merit in 2005. 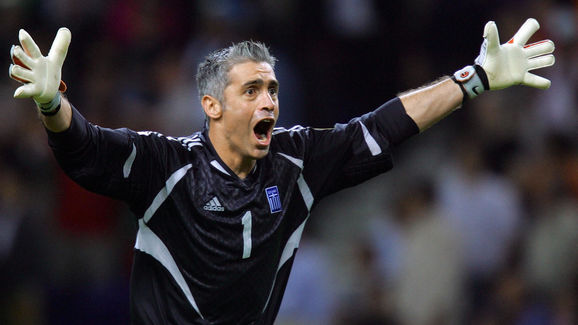 Antonios Nikopolidis (GK) - The famously silver-haired stopper won almost all of his 90 international caps under Rehhagel, with his defining moment coming in the summer of 2004 when Greece stunned the football world to win the European Championship in Portugal.

Rune Bratseth - Playing in the golden age of the sweeper, Bratseth starred for Rehhagel's famed Werder Bremen team in the late 1980s and early 1990s. That side won two Bundesliga titles, two DFB Pokals and the UEFA Cup Winners' Cup. Internationally, Bratseth also anchored Norway to an all-time high of second in the FIFA rankings in 1993.

Dieter Eilts - He wasn't signed by Rehhagel, having emerged from the Bremen youth ranks, but Eilts was another cornerstone of the club's unprecedented success at home and abroad. Eilts was later a key member of Germany's Euro '96 team and was in the Team of the Tournament.

Miroslav Kadlec - Another player led by Rehhagel who starred at Euro '96 was Czech defender Kadlec, who lost in the final. He first worked with the esteemed coach that summer when Rehhagel was appointed at Kaiserslautern. Together they earned immediate promotion from 2.Bundesliga and remarkably won the Bundesliga title the very next season. Marco Bode - A winger, Bode emerged under Rehhagel's tutelage at Bremen in the late 1980s and ultimately spent his entire career with the club. He was both a UEFA Cup Winners' Cup and Bundesliga winner under Rehhagel, while his form in 1994/95 as Bremen finished second in the final table contributed to landing his boss the Bayern Munich job.

Mirko Votava - The Czech-born German international, who won Euro '80, enjoyed an incredible 22-year top flight career, spending his best years with Rehhagel at Bremen. Votava was a two-time Bundesliga winner with Rehhagel, a two-time DFB Pokal winner, and UEFA Cup Winners' Cup winner, while he remained a key player until he left at the age of 40 in 1996.

Theodoros Zagorakis - The Greece captain who lifted the European Championship trophy in 2004, Zagorakis found his very best form under Rehhagel. The combative midfielder was nearing the end of his career, but enjoyed his finest hour and was named Euro 2004 Player of the Tournament, as well as Man of the Match in the final itself.

Michael Ballack - Going on to become one of the best midfielders in the world within a few years, Ballack played his first ever top flight game for Rehhagel's Kaiserslautern in 1997/98. At 21 years of age he was a fringe player as the club secured the Bundesliga title, but he became a regular the following year as Kaiserslautern reached the Champions League knockouts. Rudi Voller - One of Germany's all-time greats, Voller's big break came when he joined Rehhagel's Werder Bremen in 1982. In his first top flight season, the young forward was immediately Bundesliga top scorer and was named German Footballer of the Year. He went before the silverware came, but he left a star and became a legend at Roma at a time when Serie A was the best league in the world.

Angelos Charisteas - Having a career that was otherwise rather unremarkable, Charisteas was transformed into the ultimate big game player under Rehhagel's watchful eye at Euro 2004. The towering Greek striker scored the winning goals in both the quarter final against a very talented France side and in the final itself against host nation Portugal.

Olaf Marschall - It was Marschall's goals that steered Rehhagel's newly promoted Kaiserslautern to Bundesliga glory in 1997/98. The former East German international scored 21 league goals that season and even earned a World Cup call-up for Germany as a result. He was never better than under Rehhagel.