Otto Rehhagel: The 'King' Who Turned 150/1 Greek Outsiders into Champions of Europe

Otto Rehhagel is number 21 in 90min's Top 50 Great Managers of All Time series. Follow the rest of the series over the course of the next five weeks.

Theo Zagorakis, a veteran midfielder who had briefly played for Leicester but never excelled outside his home country, lifted high the European Championship trophy on 4 July 2004 after Greece had beaten Portugal in Lisbon to be crowned continental champions.

And the man who masterminded it all from the sidelines: 'King' Otto Rehhagel. Denmark had triumphed against the odds at Euro '92. But the Danes, even without star man Michael Laudrup, possessed a handful of top stars to complement their plucky underdog spirit. For Greece, there was no Peter Schmeichel or Brian Laudrup. It was bigger.

To underline the size of the shock, consider that prior to 2004 Greece had not qualified for the European Championship since 1980, nor had the country been to a major tournament since humiliation at the 1994 World Cup, where they lost all three games and failed to score.

Rehhagel was appointed coach in the summer of 2001. His first game in charge saw his team thrashed 5-1 by Finland in a World Cup qualifier. A month later, Greece threatened to shock England until a famously late David Beckham free-kick rescued a 2-2 draw at Old Trafford.

Greece finished that qualifying campaign with two wins, narrow home victories against Albania and Finland - both achieved before Rehhagel, and conceded 17 goals in eight games. The new German coach set about making changes, bringing in new players who fitted his preferred system, dispensing with others who didn't, and creating a cohesiveness not previously seen in the Greek setup. The squad Rehhagel inherited had been dominated by singularity and domestic club rivalries.

"The first thing he taught us was that the national team had to come first, Rehhagel insisted that everything else came after the national team," left-back Takis Fyssas told ESPN in 2016. "It was more like a family. We would sacrifice everything for each other."

The aforementioned Dellas had played just once for Greece before Rehhagel. Fellow centre-back Michalis Kapsis was a debutant under Rehhagel in 2003 at the age of 29, while right-back Giourkas Seitaridis and midfielder Kostas Katsouranis were other new faces. All four started the final, while Dellas and Seitaridis were named in the Team of the Tournament.

Known for being an intelligent tactician, but also a strict disciplinarian, Rehhagel's defensive turnaround was key to Greece's success. After leaking 17 goals in World Cup qualification, the new look team conceded only four en-route to Euro 2004, topping their group ahead of Spain. Remarkably, all four were conceded in just the first two games - both 2-0 defeats - which meant Greece booked their place in Portugal with six consecutive wins and six straight clean sheets.

Goalscoring wasn't a strength. Of all 16 qualifiers, Greece were the only team to manage less than 10 goals in the eight games. But when you don't concede, you only need to score one to win, and Rehhagel was more than aware of this. The Greeks at Euro 2004 were the image of a typical Rehhagel team: physically strong and aerially dominant in defence, wingers who could supply crosses to a strong header of the ball up front.

Despite qualifying well, Greece's aim going into Euro 2004 was simply to win a game, something they had never done at a major tournament. Only surprise qualifiers Latvia were less fancied and Rehhagel's team were given odds of 150/1 to win the tournament.

That opening win over Portugal in a packed Estádio do Dragão in Porto was the stuff of dreams. It only took seven minutes for Karagounis to give Greece the lead, with Basinas converting a penalty early in the second half. Rehhagel had the players playing for their country in a way that no coach had managed before. Cristiano Ronaldo's late goal was scant consolation for the embarrassed hosts.

It was already mission accomplished, but there was so much to do. A 1-1 draw against Spain in the next game was ultimately enough to secure progress to the knockout stages, because a surprise defeat against a Russian team already destined to go home early meant that it was only Portugal's win over Spain that put Greece into the quarter finals. 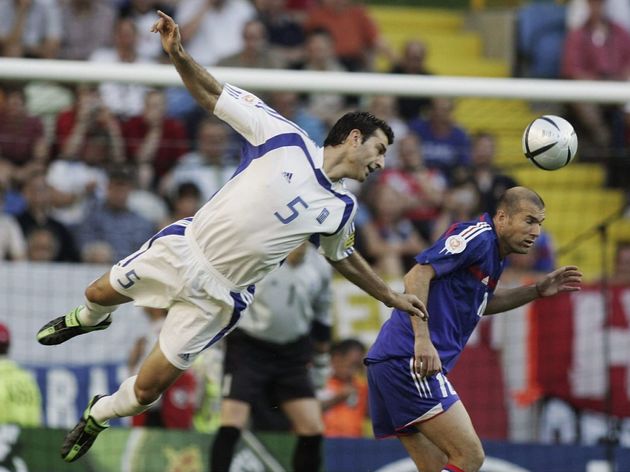 Then, Rehhagel's tactics really came to the fore. In knockout games against a France side featuring Zinedine Zidane, Thierry Henry and Robert Pires, a Czech Republic team that had been the only one to take maximum group stage points, and a re-match with a Portugal that had hit the reset button to great effect after the opening game, Greece didn't concede a goal.

Despite the incredible underdog tale, some considered Greece to be 'boring'. But it was the ultimate in pragmatism over style, and it would never have happened without Rehhagel. He of course became, and remains, a national hero in Greece. Even before the semi final, then Home Office minister Georges Voulgarakis declared he wanted to make the German a citizen. It seemed strange to be so loved abroad when ​it has been said that Rehhagel's motivation to succeed with Greece was born out of being written off in his homeland. Before Greece, Rehhagel, who developed a reputation as an eccentric dictator, had already had a long coaching career. He bounced around several German clubs in the 1970s, including Borussia Dortmund, before landing at Werder Bremen in 1981. In 14 glorious years he delivered two Bundesliga titles - finishing runner-up on four other occasions, two DFB Pokals and the UEFA Cup Winners' Cup.

It eventually landed Rehhagel the Bayern Munich job in 1995, but his spell in Bavaria was disastrous and his reputation in Germany arguably never recovered. Upon his dismissal by Bayern, 'King Otto', as he had previously become known in Bremen, moved on to Kaiserslautern, the club where he had spent much of his modest playing career in the late 1960s.

Kaiserslautern had been Bundesliga champions in 1991, but hard times followed and Rehhagel took over a team in the second tier. Promotion was immediate, however, while the team then stunned the rest of Germany by claiming the Bundesliga title in their first season back in the top flight. In 1998/99, the club even reached the Champions League quarter finals.

In both his Bremen and Kaiserslautern teams, Rehhagel had imposing centre-backs like Rune Bratseth, Dieter Eilts and Miroslav Kadlec, wingers like Marco Bode, and strong headers of the ball up front like Karl-Heinz Riedle and Olaf Marschall.

Sound familiar? It was tried and tested long before Euro 2004, you see.