In what proved to be a one-sided game, Mason Greenwood turned in a drilled cross from new United signing Aaron Wan-Bissaka seven minutes in. Marcus Rashford doubled it midway through the first half after a composed finish on the counter attack, while they twice hit the post. Leeds only brought 16 players to Australia, but United made 11 changes for the second half as expected and it was only a few minutes after the break when a Phil Jones header made it 3-0. Anthony Martial later converted from the penalty spot after Tahith Chong was brought down.

Leeds did create some chances in the first half but disappointingly faded.

The attacking shape chosen by Ole Gunnar Solskjaer will have pleased United fans, with interchanging forwards, pace and counter attacking on display in both halves, despite wholly different XIs on the pitch.

In the first half, the speed of Rashford, Greenwood and Daniel James was complemented by the intelligent 'number 10' play of Juan Mata, while Paul Pogba pulled the strings from central midfield. Mata in particular has rarely been used centrally in his five-and-a-half years with the club and it will be interesting to see if it is a role he continues to play when the season begins. Leeds struggled to get close to United as a result and the likes of Tahith Chong, Angel Gomes, Jesse Lingard and goalscorer Martial kept that going after the interval. Andreas Pereira impressed in the deep lying play-maker role after replacing Pogba at half-time.

Star Man - Paul Pogba was head and shoulders above anyone else on the pitch during his 45 minutes. His quality created the opportunity for United's opening goal and he went close to scoring on three occasions himself. If anything, it was almost a little too easy for him at times and the lack of a more challenging game invited a few moments of sloppiness. 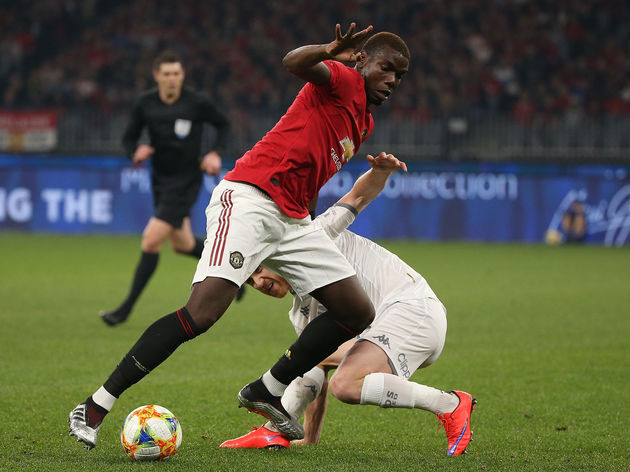 Daniel James was also sharp for the second game in a row, showcasing his searing pace on the counter attack and hitting the post, while Aaron Wan-Bissaka impressed at both ends of the pitch after an excellent defensive display and registering an assist.

While predominantly on the back foot, Leeds weren't short of chances to score in the first half and did manage to create openings on a number of occasions. A combination of good saves from Sergio Romero, and wayward finishing, prevented them from making the breakthrough.

But it was fatigue that really characterised the game for Marcelo Bielsa's side, who visibly started to tire very early in the second half. And with minimal options from the bench it was only ever going to strengthen their Premier League opponents' upper hand as the contest wore on. Star Man - Veteran Spanish midfielder Pablo Hernandez offered Leeds' most dangerous and consistent attacking threat and looked the most likely source of a goal until he went off in the second half. Others struggled to get into the game, although former Manchester United academy player Jack Harrison also impressed in parts against his former club. Manchester United's pre-season schedule will next take to Singapore to face Inter just three days from now, followed by a further Asia tour game against Tottenham in Shanghai.

Leeds, on the other hand, are staying in Australia to meet A-League club Western Sydney Wanderers. They will then play their final pre-season friendly against Cagliari in Italy on 27 July.