Bela Guttmann is number 24 in 90min's Top 50 Great Managers of All Time series. Follow the rest of the series over the course of the next five weeks. You can find Guttmann's career overview ​here.

​Who do you pick for the man who managed everyone?

Actually, Bela Guttmann made this XI relatively easy – mostly by not managing that many good teams. When he did, though, they had some absolute corkers. Using something vaguely along the lines of the 4-2-4 formation he popularised in Brazil (I said vaguely; there's a sweeper and all), here's his best team... Unless someone's gone back and changed all the records and accounts from the time, Buffon was one of the best goalkeepers of the decade – and certainly the best who Guttmann managed.

Oh, and he is Gigi Buffon's grandfather...'s cousin. And he also never won a European Cup, despite his side reaching the final in 1959 – honestly, what's with that family? Yeah! Paolo Maldini's old man! Wild! An astonishingly good defender in his own right (taking the sweeper spot in this team, thanks for asking) Maldini won four Serie A titles at Milan – like Buffon, either side of Guttmann's relatively short tenure.

Well, sort of. Given that Guttmann's Milan were top 19 games into the '54/55 season, when they won the title, it feels harsh not to give him at least a little bit of credit for that too...

A versatile outside defender, Joao didn't actually play a great deal of games in his career; he was just really good at making his appearances count. He left the club at the same time at Guttmann, going back to A left-sided player who played more of his career as a defender, Won the Hungarian league five times and the Olympics once, which is pretty handy. - In 1954, Sandor Kocsis scored 23 goals in 14 international appearances for Hungary. 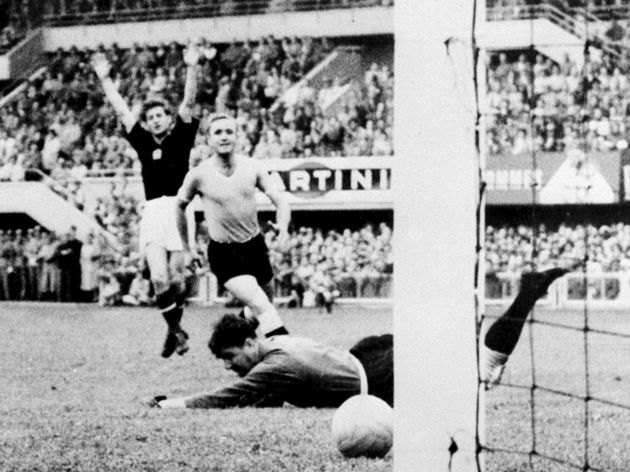