​Peter Crouch has announced his retirement from professional football, bringing an end to a career which spanned over 21 years.

The 38-year-old began his playing days with Tottenham before going on to represent the likes of Queens Park Rangers, Portsmouth, Aston Villa, Norwich, Southampton, Liverpool, Stoke and Burnley - scoring 145 goals in the process.

Following Crouchy's decision to call it a day, here are some of the big man's crowning moments. Crouch failed to make the cut at ​Tottenham during the early stages of his career, so he moved onto ​Queen's Park Rangers, where he earned his big break in the world of professional football.

In his debut season, Crouch scored 10 league goals, but he couldn't prevent his side from slipping to relegation into the third tier. However, his performances were impressive enough to warrant a move to Portsmouth, where he improved further to score 18 goals in 37 starts. 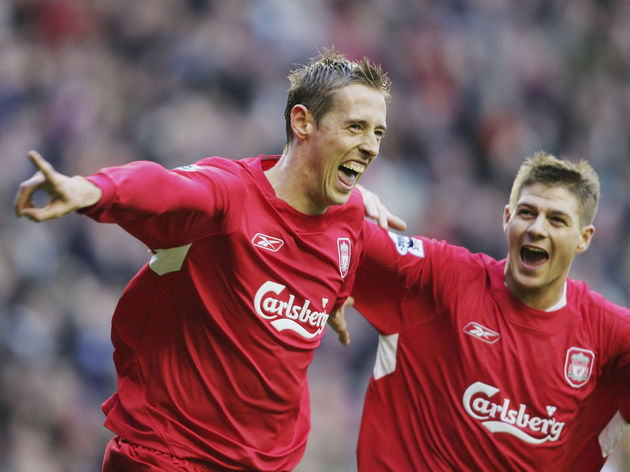 After impressive stints at ​Aston Villa, ​Norwich and ​Southampton, Crouch earned the biggest move of his career in 2005, joining reigning Champions League winners ​Liverpool for around £7m.

There was plenty of expectation on his shoulders and, for the first four months of his time at Anfield, he struggled to make any sort of impact. In fact, it took over 24 hours of game time before he was able to open his account - an incredibly scrappy brace against Wigan. Liverpool secured the 2005/06 FA Cup title in dramatic fashion against West Ham, but they wouldn't have reached that final at all if it weren't for Crouch's winning strike against Manchester United in the fifth round.

It was the most important strike of his two-year stint at the club, as he bagged the only goal of the match to send the Reds on their way to the Millennium Stadium. There have been plenty of iconic celebrations over the years, but very few can Crouchy's robot dance, can they?

Crouch whipped out the robot for the first time against Jamaica in 2006 after he netted his one and only international hat-trick, instantly confirming his status as one of the most notable cult-heroes of his generation. The fact that the celebration was soon retired makes it all the more timeless. Crouch enjoyed a more than decent international career with England, scoring 22 goals in 42 appearances, and his most notable moment for the Three Lions came during the 2006 World Cup.

England were slowly stuttering to a goalless draw against Caribbean minnows Trinidad & Tobago until Crouch rose above his marker to head home from close range. At least, we all thought he did, until replays showed Crouch yanking Scoring a hat-trick is one thing, but a perfect hat-trick (header, left foot and right foot) is an incredibly rare occurrence and very few strikers have actually managed to achieve the feat.

Crouch managed to score a perfect hat-trick for Liverpool in 2007, when he contributed to an impressive 4-1 win over Arsenal at Anfield - netting his third goal in front of the understandably ecstatic Kop End. In many respects, Crouch's ridiculous strike against Manchester City in 2012 was like something out of Tony Pulis' wildest fantasies.

After playing a one-two in the air with Jermaine Pennant, Crouch deftly controlled the ball on his chest before unleashing a rasping volley from around 30-yards, which initially looked to be sailing about 10ft over the bar, before eventually dipping viciously into the top corner. It was Crouch's greatest goal and one of the best the Premier League has seen over the past ten years. He may be best remembered as a cult hero, but it must be noted that Crouch was a fine player, who has the statistics to prove it.

In February 2017, he became one of just 27 players to score 100 goals in the Premier League (busting out the robot in celebration) and, later that year, he went on to set the record for the most headed goals in Premier League history - 51. As he entered the twilight years of his career, Crouch sensibly tested the waters in other areas of the game, notably setting up the Peter Crouch podcast, where he shared a number of hilarious anecdotes about his time as a professional footballer. Highlights included his confrontation with John 'Pants Man' Paintsil and the time Dirk Kuyt nearly killed him with a go-kart.

Such has been the success of the podcast, his very own mini-festival, 'Crouchfest', was recently organised, featuring special guests such as Liam Gallagher.