Jurgen Klopp: The Early Years at Mainz 05 Where He Sealed 'Greatest Achievement'

Jurgen Klopp is number 26 in 90min's Top 50 Great Managers of All Time series. Follow the rest of the series over the course of the next six weeks.

Lifting the Champions League, perhaps more so than even the World Cup these days, is seen as the pinnacle of football.

Jurgen Klopp joined that elite group to win the prize on 1 June 2019 in Madrid, as Mohamed Salah's early penalty was followed by a defensive masterclass and a Divock Origi closer as Liverpool became continental champions for the sixth time.

It was Klopp's third final but first win. At the Wanda Metropolitano, he had found redemption for 2018's painful loss to Real Madrid and secured his first trophy in management since 2014 when he won Germany's Supercup. The consequences of those 90 minutes on the pitch in Madrid lifted Klopp from charismatic, serial nearly man to the best in the business. It means he will be remembered as exceptional rather than simply very good.

However, for him, there is another bullet point on the achievements section of his footballing CV which still ranks higher.

"Obviously, it's a great thing to win the ​Champions League," Bundesliga.com

"We had a small squad, strong opponents. What I did with Mainz cannot be topped."

Jurgen Klopp the player was essentially a one-club man. Turned down by boyhood club Stuttgart, he flitted between amateur and semi-pro gigs and was actually

When once asked him why he had never made it to the Bundesliga as a player, Klopp ​replied: "I had fourth-division talent and a first-division head. That resulted in the second division."

Rafael Honigstein quotes Klopp recalling a trial at Eintracht Frankfurt in his teenage years when he lined up alongside future World Cup winner Andreas Moller.

“I saw Andy Moller. Same age as me at the time, 19 years old. I thought, ‘if that’s football, I’m playing a completely different game’. He was world-class. I was…not even class.”

Lack of class aside, the awkward striker turned defender lasted 11 years in Mainz making over 300 appearances, mostly in the 2. Bundesliga.

Jurgen Klopp in his playing days at Mainz pic.twitter.com/Dpdy4fBm6b

Heidel wanted someone who could motivate the players and reinstate former coach Wolfgang Frank's old 4-4-2 system, flying in the face of popular German convention at the time of playing with a libero.

“When I explained my idea to him he didn’t think about it for five seconds," Heidel recalled in ​the Guardian. "He just said: ‘I can do that.’ After the first training session on the second day as coach, he had all the players on side.

"In the first game, against MSV Duisburg, who were the clear favourites, we had the most motivated Mainz team ever. Although we won only 1-0, Duisburg had no chance that day."

The enthusiastic novice won win six out of his first seven games in charge, eventually leading the 'Carnival Club' to 14th, avoiding relegation with a game in hand. 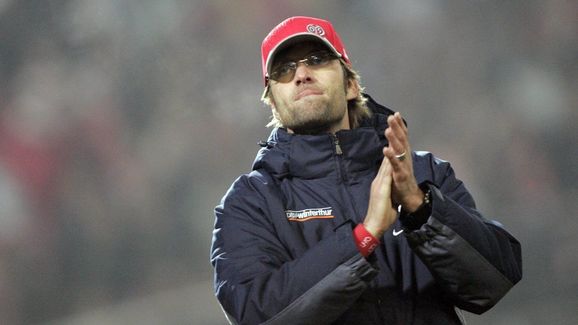 Heidel said: “Our last game was away in Mannheim. We drove 60 buses with 3,000 fans to Mannheim. They swatted us 4-0, but that did not interest us. We sailed fans and staff on a large passenger ship down the Rhine back to Mainz.

"It was a huge party and Jürgen and I sat together for two hours with a box of beer on the nose of the ship and neither of us could quite grasp what had happened in those eight weeks. By the time we got to Mainz the box of beer was no longer full.”

In the next two seasons,

As Michael Gallwey for ​Football Chronicle puts it: " 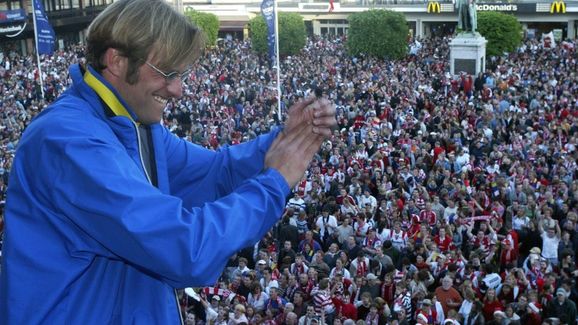 “After missing out [on promotion to the Bundesliga] in 2003 he announced in front of 10,000 fans in the city centre: ‘We will prove that it is possible to get up after such pain.’ He asked the Mainz fans to come to the first training of the new season. There were 10,000 there when training started again."

Unorthodox training methods like placing walls around the penalty area when practising shooting - so that the ball would rebound unpredictably back into play - would be used to help train players to always be alert for second chances. 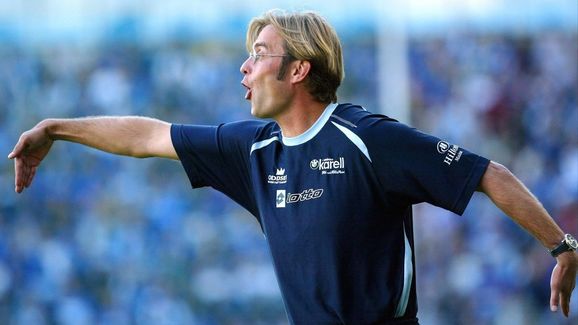 “We want to run incessantly. That’s our code of arms. We are the vanguard of the regular guys in the pub. They want us to run and fight. If one guy leaves the stadium thinking, ‘they should have run and fought more today’, we got it wrong completely.” Klopp is quoted as saying in the Honigstein biography, ​Klopp: Bring the Noise.

Comfortably the smallest team in the top flight, Mainz finished 11th in their first two seasons as a Bundesliga club, even qualifying for the Europa League - via the fair play award - giving Klopp his first taste of continental competition and the European nights that would come to define him.

“It was amazing," former Mainz forward Conor Casey ​said of his time under Klopp. "His enthusiasm, personality, rapport with the players, essence and positivity is something I still remember and took with me from my time there.”

Jurgen Klopp there in his Mainz days, looking David Bowie in 1999 taking about how the internet will change the world to Jeremy Paxman pic.twitter.com/ax9yTv3XoM

Unlike at Dortmund and especially at Liverpool, Klopp and Mainz had little margin for error in the transfer market, while big-money additions were beyond out of the question.

The manager became a sort of one-man 'Moneyball', only focussing on the human element of the game rather than the statistical one. A shrewd judge of character, Klopp was adept at determining whether a player would be a good fit for the club, meeting the player and even their families before signing - an approach that was famously later replicated with Virgil van Dijk.

In 2007, Mainz 05 were relegated back to the 2. Bundesliga, but the Carnival Club's party wasn't over. 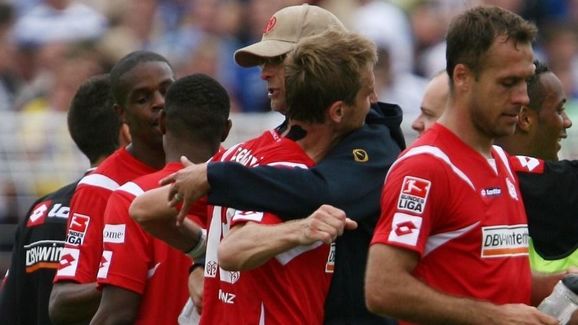 After demotion was confirmed back to the second tier, Klopp, by now one of the most important men in the club's 100-year history and the great up-and-comer in German coaching, addressed the Opel Arena post-game with a

He never lost the spirit of the carnival though, or the things he learned there.