Jurgen Klopp is number 26 in 90min's Top 50 Great Managers of All Time series. Follow the rest of the series over the course of the next six weeks. You can find Andrew Headspeath's Klopp career overview ​here​.

One of the very best coaches, screw it the best, working right now, Jurgen Klopp has been helped in his success by getting to work with some outrageously talented players in his career.

Very few were bought as superstars, though, and the German has a knack for taking talents and squeezing something extra out of them that no-one else even knew was there.

Here we continue 90min's Top 50 Greatest Managers of All Time series, with an XI of Klopp's greatest ever players. 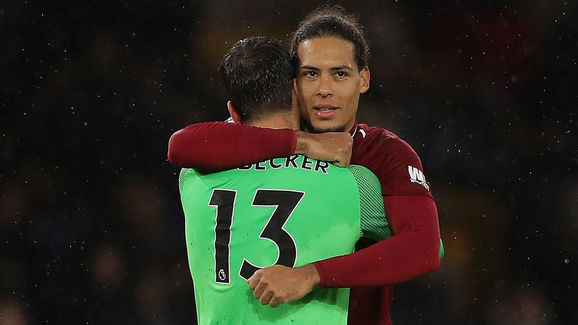 Alisson Becker - For a short time, the Brazilian was the most expensive keeper in history. While that record didn't last the summer, Alisson has picked up plenty of other honours since. In 2018/19, the big beardy wall won the Champions League and Copa America, taking home the Golden Glove in both, as well as the same award in his maiden season in the Premier League.

Trent Alexander-Arnold - Still only 20, Alexander-Arnold has already played in two Champions League finals. Liverpool's homegrown right back set an assists record for a defender in the Premier League last season (12) and ensured his name will remain in Anfield folklore forever with his cheeky corner to set up Divock Origi against Barcelona.

Virgil van Dijk - Liverpool bet the farm on Virgil van Dijk fixing their perennially suspect defence and boy did that bet come in. The PFA Player of the Year, Van Dijk has become a captain without an armband for Klopp's team and has slowly but surely developed into the world's best defender. £75m, if anything, seems like a steal.

Mats Hummels - The 2014 World Cup winner was an essential part of Klopp's Bayern-bashing, Bundesliga-winning Dortmund team, before later joining their rivals. At the age of 30, he has won more or less everything available to him bar the Champions League. Although, he did play in the final under Klopp in 2013.

Andy Robertson - An £8m signing from Hull City, Robertson seemed like a sort of innocuous squad signing that would make little real impact on the first team back in 2017. Instead, the Scot has transformed under Klopp into a lung-busting, gegenpressing assist machine with one of the finest left pegs in the sport. Ilkay Gundogan - Now playing against Klopp at rivals Man City, the Germany international was a key player at Dortmund, arriving from Nurnburg in 2011 for just €4m. Just two years later, he scored a penalty in the Champions League final - although it wasn't enough to win the trophy. He cruelly missed Germany's World Cup win in 2014 with injury but he is a record-breaker with the (nearly) all-conquering Man City.

Mario Gotze - Promoted to the first-team and given his debut by Klopp, Gotze was a teen prodigy who was crucial in Dortmund's 2012 Bundesliga title win. He then fulfilled all football fans wildest dreams by scoring Sadio Mane - The scorer of the fastest hat-trick in Premier League history before he joined Klopp's Liverpool, Mane​ has grown into one of the globe's finest forwards, joint-winning the Golden Boot in the Premier League last season. The Senegal star's success is all the more impressive considering he was discouraged from playing football as a child by his parents.

Mohamed Salah - Two Premier League Golden Boots in his first two seasons for Liverpool would've probably been beyond the predictions of even the most ambitious Reds fans when Salah rocked up at Anfield in 2017. No player has ever scored more in a 38-game Premier League season (32) than the turbo-powered Egyptian superstar.

Robert Lewandowski - Signed by Klopp's Dortmund for sub €5m in 2010 (despite supposed interest from Sam Allardyce's Blackburn), Lewandowksi took a season to find his shooting boots in Germany but then never took them off. With 202 goals (74 for Dortmund) and counting, Lewa is fifth on the all-time Bundesliga top scorers chart and will almost certainly climb to third before his career is done. His four-goal showing against Real Madrid in the 2012/13 Champions League semi-final is one of the competition's all-time great performances.