The ​Football season might be over for now, but the United Kingdom's been hit with its annual tennis fever and it's attracting some of the biggest names from the world of sport at Wimbledon. Tottenham's Eric Dier might not be a household name for most football fans, but that didn't stop the England international being introduced to the crowd in SW19 earlier this week.

He's been on his holidays following the UEFA Nations League last month, where the Three Lions picked up the bronze medal after beating Switzerland in the inaugural competition's third-place play-off match in Portugal.

While Dier settled for third place at the Nations League, Virgil van Dijk picked up silver with the Netherlands just days after he was crowned as a Champions League winner with Liverpool.

The 28-year-old was even invited down four a courtside interview while in attendance at Wimbledon. Van Dijk's due back at Melwood for pre-season this week. 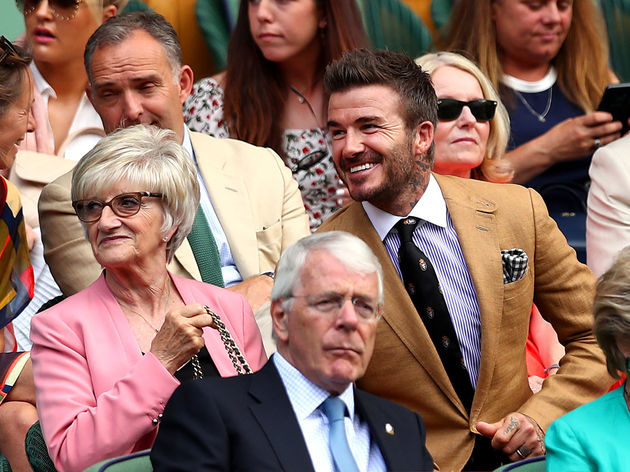 Is there any suit that David Beckham couldn't pull off?

The Manchester United legend has been a regular at Wimbledon and Beckham understandably grabs a lot of attention.

Over the years he's been pictured alongside the likes of Dier wasn't the only one to head to Wimbledon after the Nations League - via a lengthy summer holiday, of course - as England manager Gareth Southgate also got a warm reception when he was introduced to the crowd last Saturday.

The former Aston Villa and Middlesbrough defender has become an icon for fans after taking England to the World Cup semi-final in 2018.

Disappointingly, Southgate didn't wear his iconic waistcoat whilst in SW19, which at this point should probably be a sackable offence.

Did I hear World Cup semi-finals?

England's Lionesses were invited into the Royal Box at Wimbledon in the aftermath of their outstanding performance at the Women's World Cup, only failing to reach the final after a classic match against eventual winners the United States.

It wasn't just the players who were offered the chance to see tennis legend Roger Federer earlier this week, as manager Phil Neville also joined his World Cup squad at Wimbledon.

"I think he (Nadal) could also have been a fantastic football player" - Jose Mourinho#Wimbledon pic.twitter.com/SGDIETq0hh

José Mourinho wasn't just in attendance at Wimbledon, as like Van Dijk he was also asked to give an interview at the legendary tennis competition.

The Special One actually coached Barcelona