​With FIFA 20's release slowly creeping up on us, with its release date set to be on the 27 September, many fans will be anxious to see how their favourite players' ratings have fared over the course of the season.

EA are normally relatively harsh when it comes to the ratings of 'lesser known' stars, but with the stellar season that Los Angeles FC have had, we should expect many substantial upgrades heading their way.

LA FC are currently top of the table in the Western Conference and they are also currently seven points ahead of Philadelphia Union in the overall table.

Let's try to predict what their ratings could look like next season. Miller has been a part of the fantastic LA FC defence that has conceded the least amount of goals in the league this season, with the Black and Gold only conceding 16 in total and Miller conceding 13 of those.

This expansion draft pick has worked off fantastically for LA, with Miller becoming an integral part of their team, with EA hopefully rewarding this form with a slight increase. Pablo Sisniega has played second-fiddle to Miller this season only making five appearances in all competitions this season, but when he has been called upon he's been a reliable backup.

Sisniega hasn't been bad enough to warrant a downgrade, but he hasn't played consistently enough to deserve a massive upgrade hence the slight improvement. Zimmerman has undoubtedly been one of the stars of this season for LA FC, becoming the rock in their defensive line which has earned him more consistent minutes for the US on the international stage.

He may have started off a bit rocky but over the course of the season this 25-year-old has improved drastically, resulting in this substantial upgrade from a mid-rated silver to a low-rated gold card. Although Harvey was the main culprit for Portland Timber's goal against LA that knocked them out of the US Open Cup, this was one of the few outliers for him throughout the majority of the season.

He has been an incredibly reliable wing-back and provided great strength to the back-line, his upgrade again won't be stellar but it shows his improvement this season for LA. Segura has played every single game for the Black and Gold this season in the league, starting all 19 of their games, with his partnership with Zimmerman proving too difficult for many clubs to break down.

The 22-year-old is only on loan at LA and this loan has definitely played off with a substantial upgrade possibly coming his way for the next game. ​One of the many young players performing incredibly well for LA, Blackmon only signed with them in January of this year as a part of the MLS SuperDraft after being the third overall pick of the draft. Since then he's gone on to play a few games for the Black and Gold and has suprised many fans with his impact.

Since this will be his first year on FIFA as he only signed his professional contract this year, he shouldn't expect too much, with EA normally giving modest ratings out to young players. ​Beitashour has been a consistent performer for LA this season, assisting both offensively and defensively, whilst proving to be one of their many solid choices in the backline, and having recently been selected as part of the MLS All-Star starting XI, you can see that he's a fan favourite.

Beitashour hasn't lit the world on fire this season but then again he hasn't been horrible, so his rating should stay relatively similar for the next instalment. This breakout star has been superb this season somehow managing to be everywhere on the pitch at all times and never running out of energy since being converted from striker to midfielder this season due to an injury crisis LA haven't looked back. He has the highest duels won in the league and the second highest tackles won and contributes in all areas of the pitch.

EA should reward the young man with a reasonable upgrade and a position change, as on this current instalment he comes as a right winger when this season he's been playing as a central midfielder. Nguyen is no stranger to the MLS, having made over 200 appearances for New England Revolution before transferring to LA in May of last year, since then he hasn't been a regular starter due to fitness and injury concerns but when called upon he plays well.

Nguyen hasn't done enough to earn a possible upgrade but may go down a few ratings crossing into the dreaded silver territory. Unless EA are merciful, but this seems unlikely. 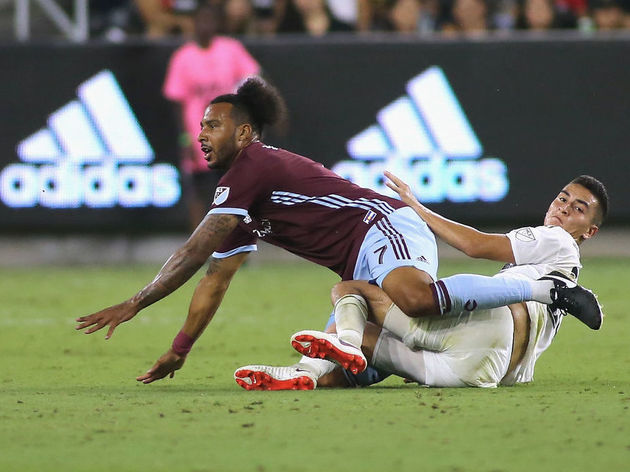 One of the many young players Bob Bradley has instilled his trust in to carry LA to victory this season, instead of choosing the most expensive first team Bradley always chooses form over wage budget, with Atuesta being a prime example of this. This season for LA he has been outstanding, with the 22-year-old getting a whopping seven assists from midfield in 17 games in the league.

There is no doubt that he is a star in the making and EA should reward his season with an incredibly generous upgrade, with his rating pushing the boundaries of becoming a gold, after starting the game as a low-rated bronze. It's strange to think that Mark-Anthony Kaye started off his LA career by fracturing his foot leaving him out for six months, but now a year on he's shown himself to be a truly top-quality player. Playing in the centre of the park or even deeper in the defensive line, Kaye has been superb, earning himself a call up to the MLS All-Stars with many of his teammates.

Kaye definitely deserves a substantial upgrade for the next instalment, possibly being one of the few LA FC players that have reached the territory of becoming a gold player, Kaye is definitely deserving of it. Many fans of the Premier League will be bemused by this familiar face, with Adama Diomande swapping the dull gloom of Hull City for the bright lights of Los Angeles. This season Diomande has scored six in 16 games assisting three more and has been a reliable backup striker in their glistening offensive line.

He hasn't done enough to earn himself a stellar upgrade so a slight increase seems more appropriate for this Norwegian international. Yet another familiar face for fans of the Premier League in ex-Arsenal man Carlos Vela, and in every sense of the word Vela has been destroying the MLS, with an absolutely mind-blowing season under his belt both for club and country. Scoring 21 goals in 21 appearances this season in all competitions and getting 12 assists in the league, he is on track to break many records this season along with his team, and if he scores 13 more in the league he will have scored the most goals scored by a single player in one season in the MLS.

In FIFA terms this has translated very well, being one of the few LA players to have received a special card on FIFA for his outstanding performances, but not just one special card, Vela has earned six different cards this year, including his most recent 95 rated card for being a part of the Rest of the World Team of the Season, meaning next year his upgrade should be colossal. Another of the many players that have appeared out of nowhere and played insanely well, Rossi should be rewarded with another huge upgrade by EA, definitely being worthy enough of becoming a low-rated gold card, being one of the few golds in his team, and after receiving a 79 rated inform card earlier in the year, its very possible his rating will stay there for next FIFA.