With a 12-month clause already triggered, De Gea is yet to agree an extension on the deal that runs out in the summer of 2020. Recent rumours have pointed to a possible breakthrough over a new weekly wage of £350,000-per-week and Solskjaer appears optimistic, at least publicly.

Ole on @D_DeGea: "I've said many times how lucky I am, and how happy we are to have him in goal. So we hope he will stay here for many years." #MUFC #MUTOUR pic.twitter.com/VgglSh2aeC

"David has had a summer where he's been negotiating and we hope we're going to get it sorted," the United boss said as he addressed the press for the first time this season.

"I'm positive. Of course with David I've said many times how lucky I am and happy we are to have him in goal. So we hope he will stay here for many years," Solskjaer added.

United have are almost at full squad travelling to Australia, with only Fred and Alexis Sanchez missing from the group, with the latter on holiday following his participation in the recent Copa America. 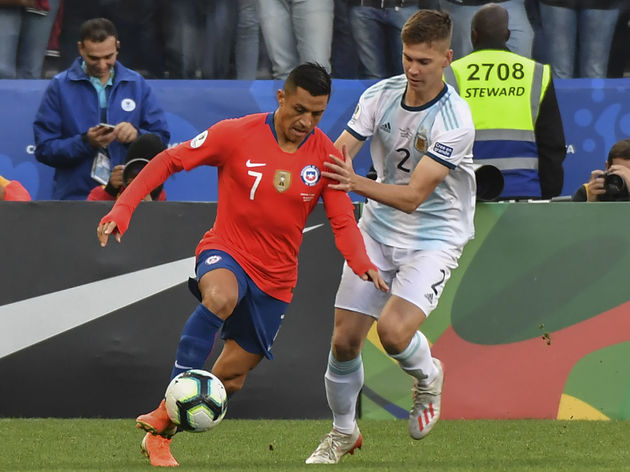 There were injury concerns after the Chilean appeared to suffer a hamstring injury in his country's third/fourth place playoff against Argentina last weekend, but Solskjaer has predicted that Sanchez will immediately be available to train by the time his summer break is over.

"I don't think Alexis' injury was too bad," the United boss explained. "When he's due back is three weeks after his last game, so that will be just after we come back from tour. I would expect him to be fit enough to play straightaway and train straightaway."

There was also positive news about 17-year-old Mason Greenwood, the youngest member of United's tour squad. The teenage forward made four first team appearances last season and Solskjaer revealed he plans to hand out more opportunities this season.

Aaron Wan Bissaka already impressing in training followed by a Mason Greenwood finish. Looking forward to seeing how they both get on this pre season! pic.twitter.com/kk30wgGm41

"He could have had five goals against Cardiff [in May] but didn't score. If a striker gets into a good vein of form, he will score goals.

"Mason will definitely play more games. He has grown over the summer and I think his confidence has grown too after the Cardiff game, as he was our best player." Solskjaer was additionally quizzed on the respective futures of Paul Pogba and Romelu Lukaku, who remain heavily linked with Real Madrid and Inter respectively. But the Norwegian insisted that United 'don't have to sell' and expressed delight over Pogba's professional attitude.