Social media can be pretty good sometimes can't it?
​

Once the television coverage ended, it used to be a complete mystery what went on in the dressing rooms of these events. Did everyone have a nice quiet celebratory drink? Does the manager go completely wild and show a never-before-seen side of themselves?

Thanks to the wonderful social media platforms such as Instagram and Twitter, we can now be right among the celebrations - or at least pretend we are. 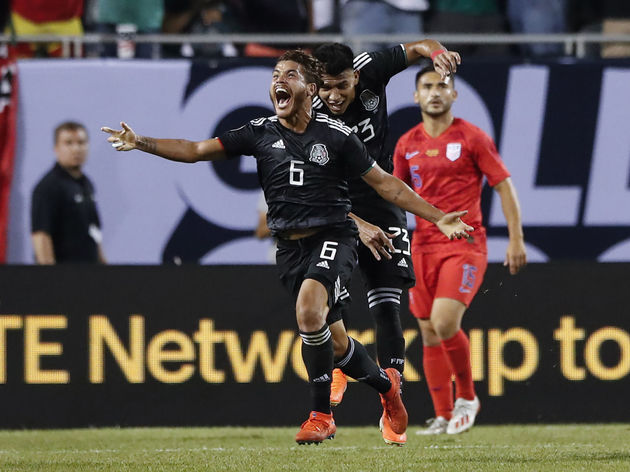 Mexico lifted the Gold Cup trophy for a record eighth time after a 1-0 victory over the USA and some players took straight to social media to show us some hectic live reactions.

Kicking us off nice and mildly we've got the whole Mexico squad celebrating their victory here wearing their 'Campe8n' shirts. The best bit about the video has to be Rodolfo Pizarro (bottom left) who almost looks convinced that a picture is being taken here, despite the entire squad chanting away. We'll let him off.

Speaking of images, here are some of the best - and yes, this one WAS a picture, Pizarro...

The man with the golden glove..

From subtle celebratory images to well, quite the opposite from defender Carlos Salcedo.

The centre back that plays his club football in his native country didn't hold back post-match and we tried not to turn this into the Salcedo show, we really did, but some of these reactions just had to be shared.

His singing is - let's say - questionable and the way he struts through post-match interviews being conducted by the USA squad will be deemed disrespectful by some, but it's more than safe to say that the 25-year-old does not hold back. We'll let you form your own opinions of the clips below..

So many great things about tonight. But the best?

Carlos Salcedo walking past the mix zone as US players are being interviewed letting everyone know it’s “Modelo Time” and playing his signature music on his speaker.  pic.twitter.com/tQDHVHEPHd

Finishing on a more heart warming note is ​Wolverhampton Wanderers forward Raul Jimenez. He was named Player of the Tournament, rounding off what was an excellent first season in the ​Premier League with Wolves. Although this clip doesn't feature him, a good old fashioned selfie celebration from his partner after the full-time whistle was just too precious to leave out.

Excellent stuff, for the most part anyway. Congratulations Mexico.