Arsene Wenger: A Pioneering Visionary Who Became Invincible at Arsenal

Arsene Wenger is number 30 in 90min's Top 50 Great Managers of All Time series.

After 22 years in charge of Arsenal, Arsene Wenger finally stepped down from the managerial hot seat and departed north London.

Taking a failing mid-table Gunners side to a maiden Premier League crown within two years, he implemented a free-flowing 'total football' philosophy that helped transcend the English game into what it is today - as well as changing the landscape of the British transfer market. He even became 'Invincible' - going the entire 2003/04 Premier League season unbeaten as he guided Arsenal to a third top-flight crown in the space of six seasons.

His success was all the more remarkable, particularly to supporters in England, because he was virtually a complete unknown prior to his appointment in late 1996.

There, Wenger won two domestic cup competitions, challenging his players to think for themselves and make their own decisions, rather than relying on his every command. Though this approach was viewed as brazen and somewhat bizarre, it worked - as Nagoya overcame a dreadful run of form to finish runners-up in the J League, earning Wenger the league's Manager of the Year award. "At a young age winning is not the most important thing...the important thing is to develop creative and skilled players with good confidence." Arsene Wenger. Arsenal were also defeated by Galatasaray in the 2000 UEFA Cup final, one of only two European finals that Wenger would reach with the club - the other being the 2006 Champions League final, which they also lost.

But things would change as Wenger began to the get best out of Thierry Henry. The Frenchman

had already shown his enormous potential, transitioning from a nippy left-winger into one of the Premier League's most feared frontmen.

But during the 2001/02 season, he became the man. 32 goals that season in all competitions fired Wenger's Gunners to a second league and cup double in four seasons. His devastating pace complemented Arsenal's slick passing style, seamlessly transitioning the ball from back-to-front - keeping the ball grounded as often as possible.

Wenger's crowning glory was still to come, though, with the 2003/04 Premier League season cementing his legacy as one of the greatest managers to ever step foot on the touchline.

His side would remain unbeaten in their 38 games played, showing mental fortitude and character to fightback from the brink time and time again. The accomplishment, which has yet to be repeated in English football, had only been achieved by Preston North End, some 115 years before.

Not only had Wenger achieved the unthinkable, he had done so with minimal tinkering to his playing squad. 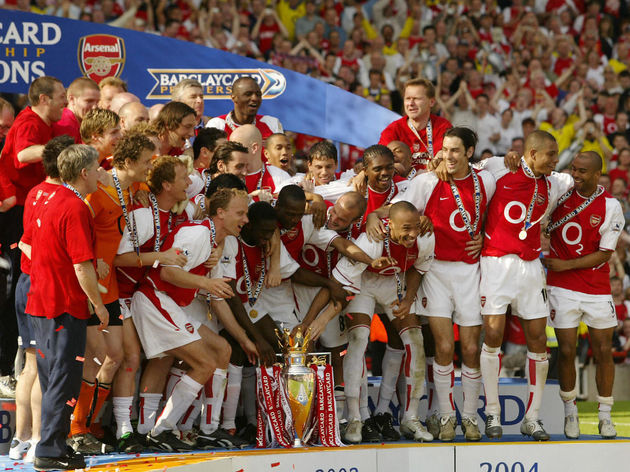 “He’s out of order, disconnected with reality and disrespectful. When you give success to stupid people, it makes them more stupid sometimes and not more intelligent.” Arsene Wenger on Jose Mourinho.

Though this season would be Wenger's peak at Arsenal, it was by no means his last act in north London. Year after year, he stuck to his principles - resistant to change his mentality and philosophy, despite the successes of cash rich Chelsea and the ongoing Sir Alex Ferguson juggernaut at Manchester United.

During this barren spell, Wenger became embroiled in several high-profile feuds with his managerial adversaries, as his once iron fisted grip of things began to waver.

He had long since clashed with Ferguson, but now he was at war with Jose Mourinho - who dubbed him at a 'specialist in failure' after years of coming up short when it really mattered.

He also found it difficult to keep world class players at the club. As a result, his posture began to sag under the weight of expectation and his hands were often tied. The club no longer wanted to invest in the playing staff, with Wenger doing the best he could with the limited (in comparison to the likes of Manchester City) resources at his disposal. He became somewhat of

Number 31: ​Vicente del Bosque: The Unluckiest Manager in the World Who Led Spain to Immortality