Madagascar continued their incredible fairytale at the 2019 Africa Cup of Nations with a dramatic penalty shootout victory over DR Congo in the last 16.

That win will take them to the quarter-finals for the first time in their history, at the first time of asking - having never previously qualified for the group stages, let alone the knockout rounds.

Elsewhere, Algeria swept past Guinea with ease, as Riyad Mahrez helped them to a 3-0 triumph.

Check out 90min's full breakdown of the games below: Obviously, this was never going to be easy for Madagascar. How could it be for a side competing in their first ever tournament, just five years removed from being ranked 190th in FIFA's world rankings?

They were elated when, with just nine minutes on the clock, Ibrahim Amada's piledriver hit the roof of the net from 25-yards or so, after the midfielder picked up on a teammate's mislaid cut inside to thwack the ball into the top left-hand corner with the outside of his boot.

This sense of ease was banished just 11 minutes later, though, when Cedric Bakambu's header brought the Congolese back level. And, despite regaining the lead through a header of their own from Faneva Andriatsima with just 13 minutes to go, a 90th-minute equaliser from Chancel Mbemba meant extra-time would be needed. And then, after a controversial decision to deny Congo a penalty right at the death, the inevitable was required.

Needless to say, the Barea (as the tournament darlings are fondly nicknamed) did not have much of a history with penalty shootouts of such a magnitude as this. And perhaps this was how they were able to perform so perfectly, slotting all their allotted kicks as their opponents missed twice.

With that, more than two years since their tournament began with a preliminary round clash against Sao Tome e Principe, history was made. The winners of Ghana vs Tunisia await. 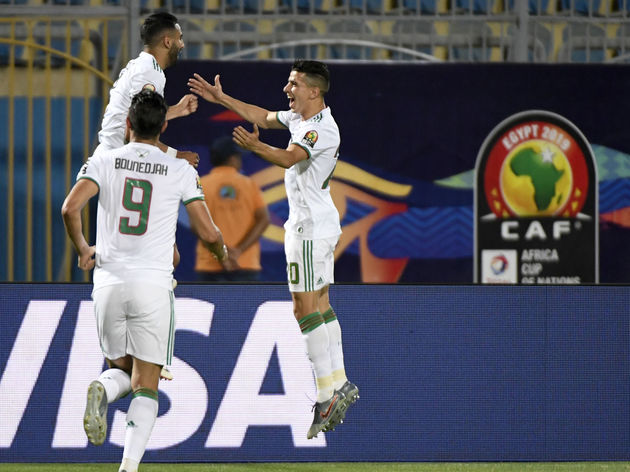 Ok, so Algeria's success so far is not the fairytale that Madagascar can lay claim to, but their's might just be the one with the happy ending. That's because you would be hard-pressed to find a team in better fettle than them thus far at AFCON 2019.

And this is principally down to their blistering attack. After Youcef Belaili's cultured finish capped off a fine flowing move to open the scoring, it was the turn of poster-boy Mahrez to take centre stage, and boy did he.

Taking his marker out of the game with a wonderfully cushioned touch from an in-swinging ball, the Manchester City man required no further invitation to smash the ball past Ibrahim Kone in goal from just inside the box.

Rounding up the victory was Adam Ounas, who put away Youcef Atal's cross with conviction following a swift counter in the 82nd minute, but even before then, the Desert Foxes already had at least three of their four feet in the quarter-final against Mali or the Ivory Coast.