These double-headers, which will presumably mean a WSL game being played immediately before or after a men's Premier League - or Championship fixture depending on the club - in order to get even more fans to take an interest in the women's game - will be 'tried' this season. Simmons has also confirmed plans for a 'series' of standalone WSL games to be played in bigger stadiums, as was the case in Spain and Italy last season when both Atletico Madrid and Juventus hosted games played in front of crowds of 60,000 and 39,000 respectively.

In among all the trolls and naysayers, there is clearly an appetite for women's football in England after the recently concluded World Cup saw as many as four new UK television records set for Lionesses matches - culminating in 11.7m watching the semi-final against the United States.

"Our job now is to make sure we capitalise on the momentum from the Women's World Cup and build audiences and build attendances," Simmons explained on BBC Radio 5 Live. 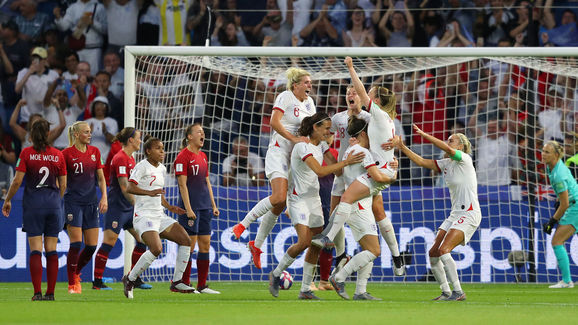 "I think one of the things the World Cup has done has made our players household names, and now people can follow them back at their clubs," she added.

Part of that is targeting the 'massive potential audience' of fans in the men's game and latching onto the idea of a 'one club ethos'. That would mean getting a Manchester United fan interested in Manchester United Women, or Arsenal, Chelsea, Liverpool, or whoever.

Standalone women's games in bigger stadiums have been a proven success abroad, while Manchester United and Manchester City were both reported to be exploring the possibility of hosting at least one game at Old Trafford and the Etihad Stadium respectively next season.

Don't go back to your normal routines. If you have enjoyed the World Cup in France, go out and buy tickets to watch your local team. Go and observe all the talent on show in the Women's Super League across the UK.

There's not long to wait!

The problem is with these 'double-headers'. On paper it sounds brilliant; selling tickets that will allow fans entry to both a Premier League and Women's Super League game in the same stadium, one after the other, turning a new section of fans onto the domestic women's game.

The main concern is ticketing, both in terms of price and availability. How would it possibly work?

The danger is that loyal Women's Super League fans are suddenly priced out of watching their team. A single game ticket for any WSL club is unlikely to be more than £6, while even the most expensive season tickets don't get much higher than £60. For children, it is even cheaper, and it means that women's football is brilliantly affordable for families. A 'double-header' with a Premier League game will change that. Take Manchester United, for example, where an adult season ticket for the women's team in 2019/20 is just £39. That is less than most would pay to watch a single Premier League fixture at Old Trafford. The cost for a family who are regular match goers on the women's side to see United men and women in a single 'double-header' could therefore easily match the usual price of a whole season of football.

Then there is availability. Not every Premier League game sells out, but a lot do and there are some clubs for whom it is very difficult to get tickets, to again use Manchester United as an example. So if a WSL game is being played before or after a Premier League fixture, will loyal fans of the women's team even have access to it if the attached men's game sells out before tickets even reach the point of going on 'general sale'? The only way to avoid these issues of price and availability is by having a set number of tickets made available to women's season ticket holders. But that then has to mean that a section of the Premier League stadium is reserved and priced differently. It's not actually fair on anyone.

It might only be as infrequent as one game for a club in a season. But 'double-headers' risk doing more damage than good for the growth of domestic women's football in this country if those fans who have supported it until now are suddenly priced out of it.