The USWNT had too much for a spirited Netherlands side in the biggest game in women's football, as goals from Megan Rapinoe and Rose Lavelle gave Jill Ellis' side their second consecutive World Cup.

​The first real chance of the final came shortly before the half-hour mark, after a Rapinoe corner was cleared as far as Julie Ertz, who hammered an effort on target from inside the area as she lost her balance. It was well met by Sari van Veenendaal, however, who celebrated as if she'd scored the opening goal herself.

What had started as a quiet first half for the Dutch keeper was beginning to grow into a trying shift, as she had to be on her toes twice more as the half-time mark approached. She saved once from Alex Morgan at her near post, and then again on the other side after a long-range strike from the tournament's joint-top scorer.

聾 Sari van Veenendaal is in fine form for #NED making save after save.

After defending so well for so long, however, some clumsy defending from Stefanie van der Gragt gifted the USA the chance to take the lead, when a challenge from behind on Morgan was missed by the referee but caught by VAR. It was given and converted by Rapinoe, who kept her cool on the big stage yet again.

The game, and the tournament, was then effectively put to bed, as Rose Lavelle added a second with 20 minutes remaining, unleashing a venomous left-footed strike after a mazy run that took her past three Dutch players.

For the USWNT, all eyes were on the woman of the moment, as Rapinoe returned to the starting XI after sitting out the semi-final victory over England with a hamstring problem. The captain's goals carried her side through their first two knockout matches with Spain and France, and while they showed they can indeed do without her against England, having her back represented a major boost - especially considering the size of the task at hand. They looked better for having her in the side, but struggled to find a way through a Dutch side who had set up well and had an inspired keeper as the last line of defence for when their back four was beaten.

The breakthrough finally came through another Rapinoe penalty, and while you got the sense that the experience possessed by the US team would be enough to see them through, it was one of their young guns in Lavelle who made sure.

Ultimately, it was another unremarkable performance by the US, but that has been the story of their tournament so far. They have found a way to win in every match so far, however, and have proved to be experts at managing games. That, more than any other attribute, wins you trophies.

At the end of the day, they are world champions once again, and not by accident.

While the front three of  Morgan, Rapinoe and Tobin Heath took much of the credit for the USWNT's successes so far, Dunn has found herself as something of an unsung hero, as she turned in yet another stellar display.

A winger by trade for North Carolina Courage but converted into a left-back on the international stage by Jill Ellis, her tenacity, athleticism and positional awareness on the left of the back four have done as much for her team as any other player, and she deserves the nod as their star performer in the final.

Lieke Martens recovered from an injury scare that many believed would keep her out of the final, while Sarina Wiegman also opted to shuffle her back four slightly, as Dominique Bloodworth moved out to left-back, with Anouk Dekker taking her berth at the heart of defence. 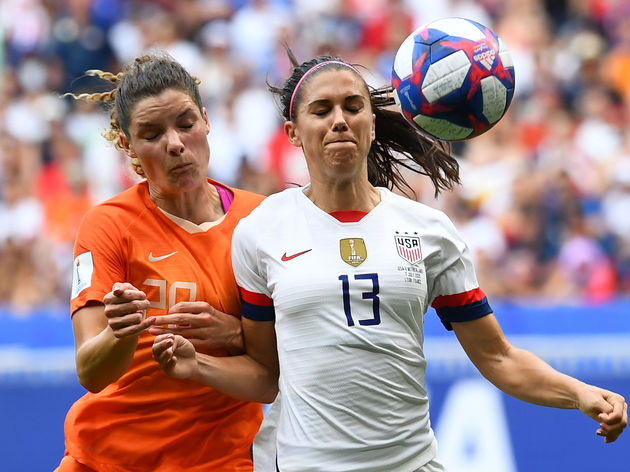 It was a move designed to give the Dutch some extra defensive solidity against a potent US attack, and it wasn't the only subtle tactical change. From the off, the usually prolific Vivianne Miedema found herself dropping into spaces between the lines, and so couldn't influence the game as effectively as she normally does.

Ultimately, it meant that while they had more rigidity than they had previously possessed, their attacking unit was isolated, and they were simply defending with no real out-ball. Shanice van de Sanden was thrown on at 2-0 to try and change that, but it was far too little too late.

A naive display resulting in a defeat in the final will sting for the Dutch, but it is worth remembering it is only their second time at the tournament. They have plenty of learning and growing to do, and you get the sense this will ultimately be looked at as a beginning for them, rather than an end, in the long run. While all the money might have been on Arsenal striker Miedema to be the Dutch MVP on the big occasion, it was her club teammate from last season at the other end who stole the show. The 29-year-old single-handedly kept a lethal US attack at bay at times in the first half, and although her guard gave way in the second, she still has a lot to be proud of - much like the rest of her side.

4 - Sari van Veenendaal recorded four saves in the first half vs the United States, a joint-personal record in a single game this #FIFAWWC (also 4 against Italy). Wall. pic.twitter.com/LqlLnj7iBa

In the Netherlands we don’t say ‘thou shalt not pass’, we say ‘Ik Sari van Veenendaal je helemaal kapot’ and I think that’s beautiful #usaned

Her role in the second half was limited to keeping the score down, but her display at this tournament should certainly be enough to earn her a new club after her release from the Gunners at the end of last season.