Sweden ended their Women's World Cup campaign on a high with a third placed finish, beating England 2-1 in Nice on Saturday.

After starting the game on top, ​Kosovare Asllani put Sweden in front after 11 minutes. Alex Greenwood practically passed it right into the feet of Asllani, and although Karly Telford in goal got a touch to it, the midfielder took her chance well and fired home for the Swedes.

Sweden doubled their advantage just ten minutes later, thanks to a wonderful finish from Sofia Jakobsson. Completely unchallenged on the left hand side, Jakobsson picked up the ball from a tight angle and curled her shot past Telford to put the Blågut in cruise control.

Fran Kirby pulled one back for England with a neat finish, bursting through the Swedish defence and curling her shot in off the post. Ellen White thought she had drawn the Lionesses level minutes later, but her goal was cruelly disallowed for handball as Sweden secured bronze. England really wanted to end this tournament on a high and secure their second consecutive third placed finish at a World Cup. However, the Lionesses lacked focus in the opening 20 minutes as Sweden cut them open and took a quickfire 2-0 lead in Nice.

Kirby's goal was exactly what they needed to get back into the game and, while they had their equaliser disallowed, they fought on. England were rejuvenated in the second half and did their best to fight their way back into the game, though it was not enough at the end of the day.

While Phil Neville desperately wanted to reach the final, the Lionesses have made the country proud. It was a wonderful few weeks in France which showed England at their best and despite back to back defeats to end the tournament Neville's side have made everyone proud. 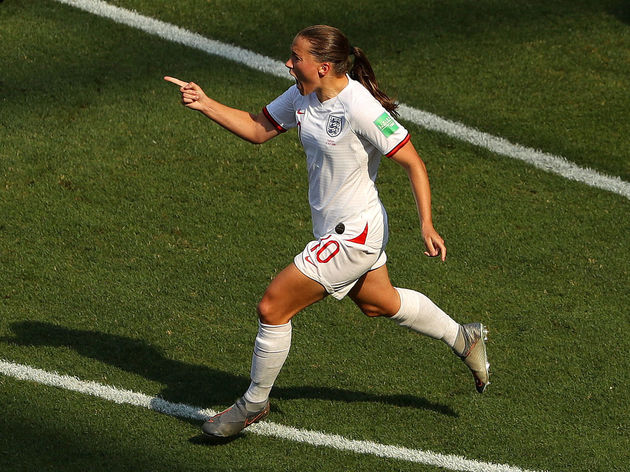 STAR PLAYER - Frank Kirby was brilliant. Her goal and attacking presence pulled England back into the game. She fought hardest and led the English attack well, putting in a real shift for the Lionesses. Despite having played a day later than England with extra time, Sweden had the far more energetic start. They put pressure on the English defence straight away, dominating possession and playing much higher up which resulted in their early goal in Nice.
They were in control within 20 minutes and even after England's consolation they kept up their pressure and momentum. Sweden continued to defend fearlessly with a string of goal line clearances, bouncing back from their agonising semi final defeat in style.
It marks the end of another successful tournament for the Blågut, and finishing third on the biggest stage is certainly an achievement. They fought hard all throughout the tournament, and although they couldn't make the final they finish off a memorable summer in France well.

Starting XI: Lindahl (7*); Eriksson (7), Sembrant (6), Fischer (7), Glas (6); Seger (6), Asllani (7), Björn (6); Rolfö (N/A), Blackstenius (6), Jakobsson (7).
Substitutes: Hurtig (6), Zigiotti (6), Ilestedtat (7).
STAR PLAYER - Although Sweden were excellent in attack, it was Hedvig Lindahl's performance in goal which helped them to victory. The Swedish goalkeeper made some big saves throughout the game and was solid in goal, producing another standout performance. Both countries have two months before they return to international duty, with England playing two friendlies and Sweden beginning their European Championship qualifying campaign.

England play a repeat of their quarter final tie on 3 September when they face Norway. They must then wait another two months for their next scheduled fixture, when they entertain Germany at Wembley on 9 November.

Sweden begin their EURO 2021 qualifying campaign on the same day with a trip to Latvia on 3 September. They then wait until October for their next game, when they visit Hungary on 4 October.