The USA are the first country in the history of the competition to have reached three consecutive finals after already doing so in 2011 and 2015. They will also be keen to become only the second country after Germany (2003, 2007) to successfully retain the trophy.

For the Dutch players this is a first global final in only their second ever World Cup appearance - remarkably they were first time qualifiers just four years ago in 2015.

As the single biggest game in women's football beckons, take a look through 90min's preview...

With the Dutch not reaching their first World Cup until 2015 and never previously qualifying for the Olympics - the 2020 games will be their first - this will actually be the first ever competitive meeting between the United States and Netherlands.

Their previous two meetings, both international friendlies, have ended in 3-1 U.S. victories. The most recent was a 2016 friendly in Atlanta. The Dutch actually scored first that day, with Shanice van de Sanden netting within two minutes. But goals from Carli Lloyd and Allie Long, plus a Dutch own goal eventually turned the result on its head.

Routes to the Final

There was an early assumption that the United States would win this World Cup at a canter after blowing away Thailand in a record 13-0 win in their Group F opener. But they have been made to work increasingly hard as the rounds have passed to reach the final. 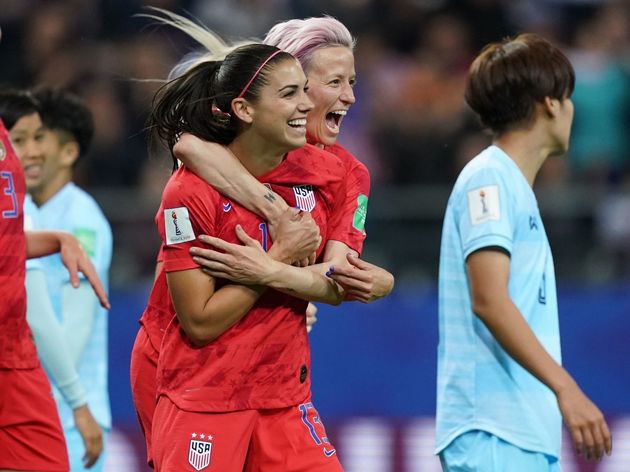 They have habitually scored early, though, and it was bizarrely Thailand who actually managed to hold onto a clean sheet for the longest time - 12 minutes.

Chile and Sweden were beaten 3-0 and 2-0 respectively for the U.S. to top their group, while Spain provided a physical challenge in the round of 16. Two softly awarded penalties, both scored by Megan Rapinoe, eventually saw of the Spaniards.

Rapinoe scored twice more as the Americans beat France 2-1 at the quarter final stage, while England fought incredibly hard until the end of the semi final. Again, the United States won 2-1, with Golden Boot contender Alex Morgan scoring what proved to be the winner. As reigning European champions but not exactly in brilliant form in the 12 months leading up to the World Cup, the initial pressure was on the Netherlands to get out of a potentially very tough group containing Canada, New Zealand and Cameroon.

They had to work hard in their opener against New Zealand, sealing a 1-0 win in the 92nd minute, but later prevailed 3-1 against Cameroon and scored only the second and third goals that Canada had conceded this year when they won 2-1 in the Group E decider.

Japan provided a very tough test in the round of 16 and it required a soft 90th minute penalty from 2017 Best FIFA Women's Player Lieke Martens to win 2-1. Italy also took a lot of breaking down in the quarter finals, with two second half goals giving the Dutch a 2-0 win. A resilient Sweden refused to be beaten over 90 minutes in the semi-final, but a well worked Jackie Groenen goal eventually made the difference in extra-time as the Dutch won 1-0.

Megan Rapinoe responding to criticism that Alex Morgan’s tea-sipping celebration was distasteful: “Wah, wah, wah. It’s like, we’re at the World Cup. What do you want us to do?

“We work hard, we like to play hard.” pic.twitter.com/KNPuFWD1Se

Elsewhere, Sam Mewis will be hoping to regain her place amid strong and healthy competition in midfield. If Mewis does return, it could be Lindsey Horan who drops to the bench, with Julie Ertz and Rose Lavelle both starting every knockout game.

Going to extra-time and playing their semi-final a day later will have a physical impact on the Netherlands and rest and recovery will be so important in their preparations. A toe injury forced Lieke Martens out of the Sweden clash at half-time. She is hoping to be fit, but is prepared to give up her place if she is anything less than 100%. Otherwise, the team appears to pick itself after being largely settled in the knockout rounds.

Wide forward Lineth Beerensteyn could keep her place ahead of Shanice van de Sanden, dropped for the semi final after a disappointing tournament.

This was always going to be a tough game for the Netherlands, but a day less rest from the semi-finals and playing an additional half hour to get here will make it even tougher, putting the United States as firm favourites to lift the trophy.

That being said, there are defensive weaknesses in the U.S. side that England in particular threatened to blow open. The Dutch have some of the most talented attacking players in the world, if they are all fit and firing, and could expose those weaknesses given the chance. The Americans obviously have plenty of firepower of their own, though, and whether the Dutch will be able to sufficiently keep them out to get ahead and stay ahead is another matter.