Luiz Felipe Scolari: How the Enigmatic 'Big Phil' Succeeded as Much as He Failed on the Big Stage

is number 33 in 90min's Top 50 Great Managers of All Time series. Follow the rest of the series over the course of the next seven weeks. You can find Jamie Clarke's 'Big Phil' all-time best XI ​here.

Never one for the middle ground, Luiz Felipe Scolari has delivered both great success and stupendous failure during his 37-year managerial career.

As a head coach, Scolari began his imposing the same no-nonsense style of football, for which he had become renowned for, as a defender in his playing days. He stuck with this style for some time, bringing him modest success at club sides in his home country and in Kuwait.

It was at the beginning of the 1990s, where a return to management in Brazil sparked a small change in Big Phil's philosophy. No longer employing just an ugly style of play, the three Brazilians teams managed by Scolari in this decade were clinical in attack and garnered a team spirit matched by no other.

Early signs of the influence that religion had on his management style began to show, as Scolari insisted the changing room became a sacred place - a belief he drilled into his players. Clearly showing his preference for privacy, he also kept his squad sheltered from the media.

His tetchy relationship with the press would become a trademark of his career and the odd scuffle and heated argument with journalists after games were not uncommon.

Nevertheless, this formula worked a treat for 'Felipao', as he became known, as he won the Copa Libertadores with both Gremio and Palmeiras in 1995 and 1999 respectively.

One month prior to the 2001 Copa America and with their hopes of World Cup qualification hanging by a thread, Brazil were in desperate need of a coach to reverse their fortunes and Scolari was the man they turned to.

However, the start of his time as Brazil manager didn't exactly go to plan. A shock 2-0 defeat to Honduras in the quarter-final of the Copa America left Big Phil's position as head coach on thin ice. Reacting in as simple terms as necessary, he said:

He came under intense scrutiny from the Brazilian press once again in 2002 after his shock omission of the popular Romario from his World Cup squad. The country was left in a state of shock as ​Scolari became 'public enemy number one'

The only suitable response to this would be leading Brazil to their fifth World Cup triumph.

And that's just what he did.

Scolari's meticulous tactical preparations coupled with his religion-inspired motivational techniques appeared to strike the right chord with his players and a 2-0 victory over Germany in the final saw Brazil crowned world champions for a fifth time.

After achieving eternal glory with Brazil, he stepped down as the national team coach, and three months later jumped ship to take the reins at Portugal, who were hoping he could win them their first international trophy at Euro 2004.

In an attempt to mirror the faith-led formula that had worked so well with Brazil, Scolari asked the Brazilian FA to borrow an image of ON THIS DAY in 2004: 80/1 outsiders Greece stun Portugal 1-0 to claim the European Championship title #football pic.twitter.com/QPihUGsXfG

Despite this defeat, Scolari's achievements with Brazil and Portugal had made him one of the hottest managerial properties in world football, and ahead of the 2006 World Cup, with Sven Goran-Eriksson's reign as Three Lions boss coming to an end, the English FA did what every major footballing nation desperate for success in the early 2000s did: they went after Luiz Felipe Scolari.

Their attempts to lure the Brazilian to the England job after the World Cup were ultimately unsuccessful, as Scolari expressed his discontent at the intense media attention he was subjected to as he discussed the move. In a statement which followed, he said: His career would come to be defined by this second stint as Brazil coach. Hired in 2012, the 64 year-old was tasked with ending an agonising 12-year wait for a sixth World Cup and to do so in his home country.

Brazil would be hosting the tournament for only the second time. On the previous occasion in 1950, Flavio Costa's side gave away a one goal lead to lose 2-1 to Uruguay in the final. A defeat the country had never fully recovered from and it would be this PTSD that would be the undoing of Brazil in 2014.

Going into the tournament as strong favourites, they looked steady in the group stages. They overcame a scare against Chile in the second round, and beat Colombia in the quarters to set up a semi-final with Germany. However, in doing so, they lost Thiago Silva through suspension and Neymar suffered a horrific injury, as he ​narrowly avoided paralysis after Juan Camilo Zuniga collided with his lower back.

It was an uphill task, but with the weight of a nation behind them, anything was possible.

Sadly for Brazil, anything was actually possible.

A first-half capitulation saw Germany score four goals in six minutes, as they romped to a historic 7-1 victory. 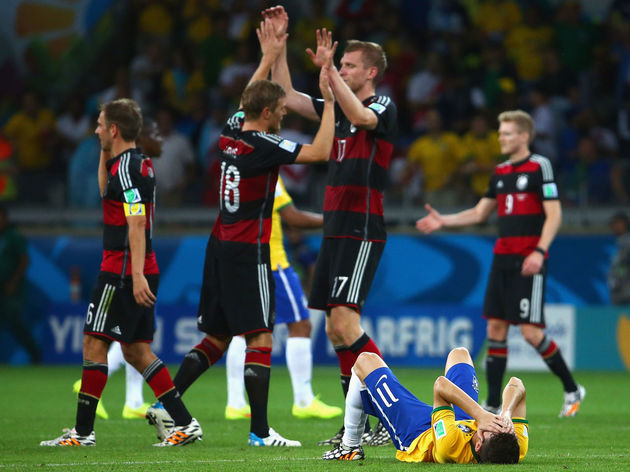 Having found such a perfect balance between passion and tactical preparation in his victorious 2002 World Cup campaign, Scolari seemed to rely too heavily on the emotional side of the game in 2014, which became the primary cause of their catastrophic break down.

"Rather than make a real plan, they abandoned themselves to romantic notions of passion and desire"

Ken Early on Why Brazil Lost, via ​Slate

If 2014's World Cup was a chance for Brazil to right the wrongs of 1950, whenever they next host the tournament, it is surely this game that will be looked upon as the one which needs to be atoned for.

Despite all the glory he has achieved, and continues to achieve, as a manager, Scolari may never get over this defeat.

For he, Big Phil, will go down in history as the Brazil coach who lost 7-1 to Germany in the semi-final of a home World Cup; a defeat so catastrophic, that it may eternally shroud all of his incredible achievements in the game.