The game was broadcast live on BBC One, as every England at the tournament has been, and commanded a 50.8% of the available audience share, meaning that just over half of everyone watching television at that time was watching England.

This is getting us through today 🙌

11.7 million of you tuned in last night. Our game was the most-watched programme of 2019 so far. A watershed moment. #Lionesses pic.twitter.com/51Qf57xUmS

That number also makes it the most-watched thing on UK television so far this year.

Prior to this summer, the biggest UK television audience for a women's game had been the four million who watched England's Euro 2017 semi-final against the Netherlands two years ago.

That record was smashed when England and Scotland met in the opening Group D game last month, with a 6.1m peak TV audience. The record was pushed to 6.9m for England's first knockout game against Cameroon and reached 7.6m for the quarter-final against Norway. 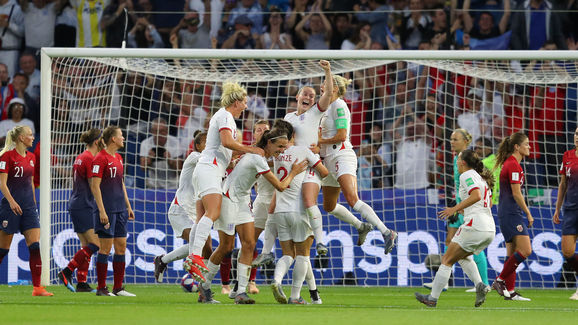 With a place in the World Cup final at stake, the semi-final against the United States was the biggest game in the history of the England team, and 11.7m tuned in to watch the drama and action unfold. That was a huge increase on the most recent record alone, never mind the others.

The game itself ended in a narrow defeat for England after going toe to toe with the Americans for 97 minutes. The result wasn't sealed until the final whistle blew and it was only very fine margins that prevented England from at least forcing a period of extra-time, if not winning.

After an early U.S. goal from Christen Press, Ellen White equalised for England with her sixth goal of the tournament. Alex Morgan later restored the American lead with a sixth goal of her own, with that pinpoint header ultimately proving to be the decider. White thought she had scored a second equaliser for the Lionesses, only for VAR to show that she had been marginally offside, while a late England penalty from captain Steph Houghton was saved by American goalkeeper Alyssa Naeher.

Even though England lost, the game was never short of drama, action, excitement and quality, and was a truly incredible advert for women's football as a whole. What's more, 11.7m people saw it.