Spain were absolutely outstanding at the 2019 European Under-21 Championships this summer, winning the tournament in spectacular fashion. However, if you just look at their squad, that should come as no surprise.

​With nearly 1,700 senior top-flight appearances between them, this group were always going to be ready for the tournament, and they did not disappoint.

Here's a closer look at all 23 members of Spain's triumphant squad. Antonio Sivera (22, Alaves) - Sivera, who featured in all but one of Spain's matches this summer, is flirting with the Alaves first team after establishing himself as their reserve goalkeeper. He conceded just three goals on Spain's run to glory, and is tipped for a bright future..

Unai Simon (22, Athletic Bilbao) - Simon began the tournament as a starter, but quickly lost his place after Spain's 3-1 defeat to Italy in the opening game. Like Sivera, Simon is near his own breakthrough with Athletic, with the 22-year-old also featuring in cup games.

Dani Martin (20, Sporting Gijon) - Martin was not called upon this summer, but the 20-year-old will soon take his place as the starter of the Under-21 side. 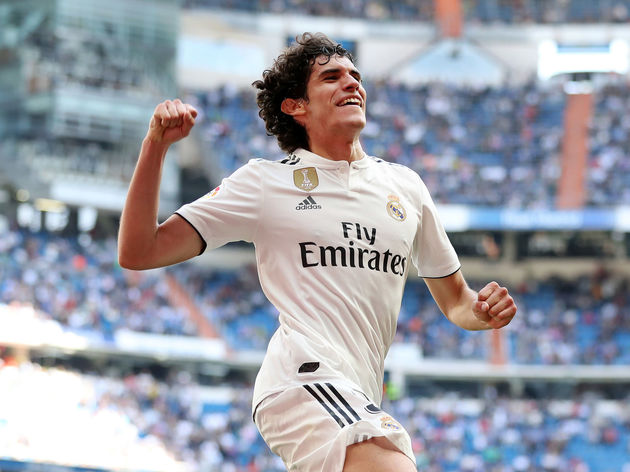 Jesus Vallejo (22, Real Madrid) - The captain of the squad, Vallejo has long been viewed as one of Spain's most exciting young defenders. He secured a move to ​Real Madrid in 2015, but he has struggled to force his way into the team. However, his dominant showings this summer might change things.

Jorge Mere (22, 1. FC Koln) - The first in the squad to have taken his talents to the ​Bundesliga, Jorge Mere joined Koln before they were relegated in the 2017/18 season, but he stayed to guide them back to the top flight at the first time of asking. With a terrifyingly bright future, don't expect to see the centre-back playing second-tier football again any time soon.

Unai Nunez (22, Athletic Bilbao) - Nunez rotated with Mere for the second centre-back spot this summer, but likely would have been a certainty if he had not lost his place with club side Athletic. Surprisingly, he saw his role in the team reduced last season, and he will surely find himself the subject of transfer rumours if things don't change soon.

Martin Aguirregabiria (23, Alaves)- Yet another defender with an enormous amount of top- Pol Lirola (21, Sassuolo) - With Aguirregabiria dominating the lineup, Pol Lirola was the unfortunate man to miss out at right-back. He has been a core part of Sassuolo's side in the last three years, and it speaks volumes about Aguirregabiria's quality that a player like Lirola can't get a look in.

Aaron Martin (22, Mainz 05) - At just 22 years old, left-back Aaron Martin already has 100 senior appearances in the Bundesliga and ​La Liga to his name. Now playing for Mainz 05, he is one of the many gems of this side.

Junior Firpo (22, Real Betis) - Rounding off Spain's defence is Real Betis star Junior Firpo. The wing-back was a dominant force in La Liga last season, but again found himself a victim of the frightening level of competition for places as he was forced to rotate with Martin at left-back. Without a shadow of a doubt, Spain's future at the position is sorted. Fabian Ruiz (23, Napoli) - Fabian was named as the Best Player of the competition, and it's not hard to see why. The ​Napoli man is a fully fledged star and showcased his stunning technical ability in each game. Capable of picking a pass or firing in a long-range strike, Fabian is set for a fantastic career.

Carlos Soler (22, Valencia) - Able to operate anywhere across the midfield, Soler already has an enormous 114 appearances for Valencia to his name, despite being just 22 years old. The midfield maestro has incredible vision on the field and often finds himself in a position to score.

Mikel Merino (23, Real Sociedad) - Yes, ​Newcastle fans, that Mikel Merino. the 23-year-old defensive midfielder has played in the Bundesliga, the ​Premier League and La Liga, and brings an incredible amount of experience to the side. Dani Ceballos (22, Real Madrid) - He starred in 2017's tournament, and he did so again in 2019. Real Madrid wonderkid Ceballos did not disappoint, showcasing his impressive creativity in almost every game. He struggles for minutes in Madrid, but could be nearing a big-money move elsewhere.

Mikel Oyarzabal (22, Real Sociedad) - Oyarzabal is already one of Spain's finest wingers, and it seems almost unfair that he is allowed to compete for the Under-21's. He bagged 13 La Liga goals for Real Sociedad last year, and the sky really is the limit.

Igor Zubeldia (22, Real Sociedad) - Like Oyarzabal, Zubeldia has years of experience anchoring Sociedad;s midfield. He may not have seen much game time in Italy, but that's what happens when so many first-team stars come together.

Alfonso Pedraza (23, Villarreal) - Pedraza, who spent time on loan with ​Leeds United back in 2017, is now a regular starter on the wing for Villarreal. He has been away on a number of loans, but now appears set to cement his place in the team going forwards. Pablo Fornals (23, West Ham United) - Having already sealed a huge move to ​West Ham United this summer, Fornals bagged two goals en route to the final, giving fans of the Hammers lots to get excited about.

Marc Roca (22, Espanyol) - Espanyol's starting midfield anchor, Roca was a vital part of Spain's success this summer, even grabbing a goal against France in the semi-final. Borja Mayoral (22, Real Madrid) - Borja Mayoral scores goals, and he did so this summer. He managed to grab two off the bench, but whether it will have earned him a place back in Real Madrid's squad is anyone's guess.

Manu Vallejo (22, Valencia) - Valencia have just picked up Vallejo permanently, and it's easy to see why. He has shined in the second tier with Cadiz, and his time to shine is almost upon us.

Rafa Mir (22, Wolverhampton Wanderers) - Mir has been one of Spain's brightest prospects for many years, and ​Wolverhampton Wanderers surprised many by winning the race for his signature in 2018. He had to settle for a few appearances off the bench this summer, but will have plenty of opportunities to shine going forwards.

Dani Olmo (21, Dinamo Zagreb)- If you haven't heard of Dani Olmo, listen up. Having swapped ​Barcelona for Dinamo Zagreb in 2014, he took a huge step away from the limelight, but he is back amongst the stars now. With three goals to his name, on top of some stunning showings in Croatia, expect to see Olmo turn out for an elite side soon.