Canada Day: 10 of the Best Canadian Footballers of All Time

Canada isn't famous for being great at men's football or for producing top players - ice hockey is more their thing. It isn't common to see Canadians in the big European leagues but, with that being said, there have been a fair few notable exceptions over the years.

Here is a list of some of the best Canadian players of all time. ​The goalkeeper played his whole career in England playing for Ipswich Town and West Ham United, as well as a loan spell at Chelsea.

At international level, the highlight of his career has to be when he helped Canada win the 2000 CONCACAF Gold Cup, saving two penalties and only conceding three goals. 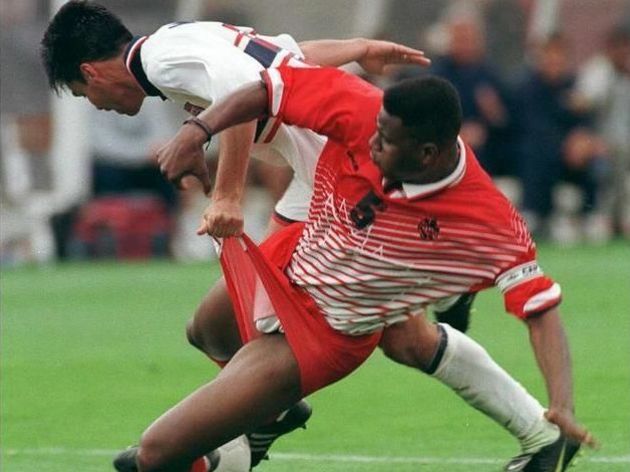 ​The Trinidad born defender represented Canada and made 82 caps for the country. He played for a host of clubs spending lots of his career in the Netherlands, North America and even England - playing for Port Vale.

He wasn't a great technical player but the rugged style of the player made him one of the most feared and respected in the CONCACAF. ​The winger featured last season for Cardiff City in the Premier League and has also played for Blackburn Rovers and Queens Park Rangers, making 161 top-flight appearances in total to date. ​The midfielder is the current captain of the Canada national team and is playing for Scottish side Rangers.

He has also turned out for Huddersfield Town and played at the top for three seasons in the Premier League for Burnley. Dwayne De Rosario was an attacking midfielder and played most his career at Toronto in MLS where he won many individual honours such as being put in the MLS Best XI on six occasions.

He was a clutch finisher for both his clubs and country and won the CONCACAF Gold Cup with Canada in 2000. ​In years to come we may well be talking about Alphonso Davies as the best Canadian men's player of all time.

The 18-year-old is already playing at the top level at ​Bayern Munich and has a big future ahead of him. He is a natural winger but is also no stranger to playing at left back where he may get more opportunities for the German giants. ​Yes, even though Hargreaves played for the England national team (42 times no less), he was born in Calgary and is a Canadian citizen. ​The forward was a clinical finisher scoring goals for both his club and country and ranks fourth on Canada's all-time top goalscoring list with 16 in 66 appearances.

He played in MLS and in Portugal and was named top foreign player of the year in Portugal in 1994 playing for Maritimo. ​Playing in both defence and midfield, Stalteri is certainly one of the more famous players to come from Canada.

He played out in both Germany and England winning the league and cup double for Werder Bremen before playing in the Premier League for Tottenham and Fulham.

Only one man has more Canada international caps (84) than the Ontario-born star... And that man is Julian de Guzman with 89. The older brother of Netherlands international Jonathan de Guzman, Julian was the first to player born in Canada to play in Spain's La Liga, which he did for Deportivo La Coruña.

The older de Guzman brother also spent time in the Bundesliga with Hannover, the Greek Superleague with Skoda Xanthi and MLS clubs Toronto and Dallas.

He is now the general manager at NASL side Ottowa Fury.