There have been some great memories in France this summer and there will be more to come, but for Hamm, someone who was a genuine pioneer of the women's game at the global level, seeing how Thailand reacted in that moment is what football is really all about.

The stoppage time strike from Kanjana Sungngoen was no more than a consolation goal in a 5-1 defeat, but it came just days after being on the receiving end of a record breaking 13-0 defeat at the hands of the United States and served as a moment of validation after much scrutiny.

"I would probably say, seeing Thailand score," Hamm told 90min at the FIFA World Football Museum presented by Hyundai, where artist Rachel Gadsden created a painting inspired by the former US international. "That emotion was raw and real, and sometimes we caught up in what teams aren't, rather than what they're building, the foundation they're laying and what it's bringing out of people.

"I think the tears in the eyes of the players and the staff and the bench were genuine and authentic, and are what makes this game so great." 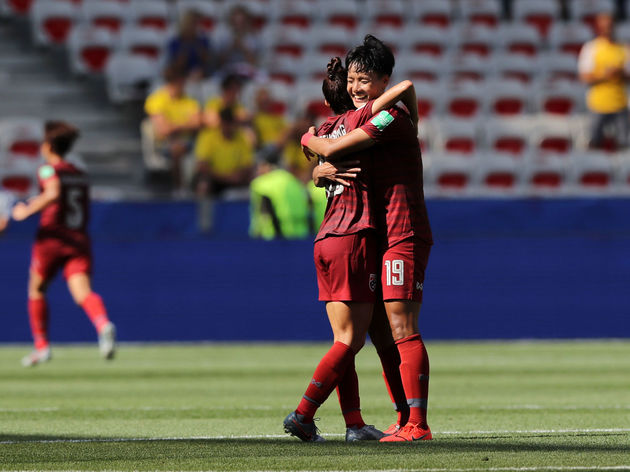 In terms of which players have impressed her the most over the last few weeks, the 1991 and 1999 champion said, "If I look at the U.S.: Megan Rapinoe. I think Lindsey Horan and Sam Mewis have had incredible tournaments."

"I really like Diani from France. She can play a number nine and they play her out wide, she's got every skill. I'm a huge [Eugenie] Le Sommer and [Amandine] Henry fan, they're just solid," she said.

"Sam Kerr is just a special player and, obviously, Christine Sinclair is so close to breaking the [international goal world] record, and she will. She's just class up and down, everything she's done for our sport. It's just a really exciting time to be a fan of women's football." One of the most significant moments of this World Cup saw Brazilian legend Marta give an impassioned speech to inspire the next generation after her campaign ended in the last 16.

"She's right, Hamm said. "She's talking about not just the future of the women's game, but the future of the game in her country and how your team is only as good as your current commitment. That's what she wants all these young girls to feel, that they're worth that investment.

"First you have to be believe in yourself that you're worth that investment and that's what she was saying, that you are worth it,

This could well have been Marta's last World Cup and the six-time FIFA World Cup Player of the Year will be remembered as one of the all-time greats. She is certainly among the best for Hamm, who named former USWNT colleague Michelle Akers as the best ever.

"In the women's game I got to play with some of the best players in the world. Michelle Akers is still the best player I've ever seen. Marta, Kristine Lilly, there's so many," she explained. "I think 1986 was the first World Cup that I was able to see and seeing [Diego] Maradona play was unbelievable. But I just remember someone came up to me and said, 'You remind me a lot of Johan Cruyff'. And so I started trying to find video of him. I remember thinking if I can be a tenth of the player he was, that's a great deal. He was one of my favourites."