​Peter Schmeichel, Thierry Henry, Eric Cantona and Patrick Vieira; what do they all have in common? They are all dwarfed by David Silva.

A very small man can cast a very large shadow - as 'El Mago' has shown during his mesmerising Manchester City career - and it's not just those four giants of English football who are in his. No foreign import can compare with the man from the Canary Islands. 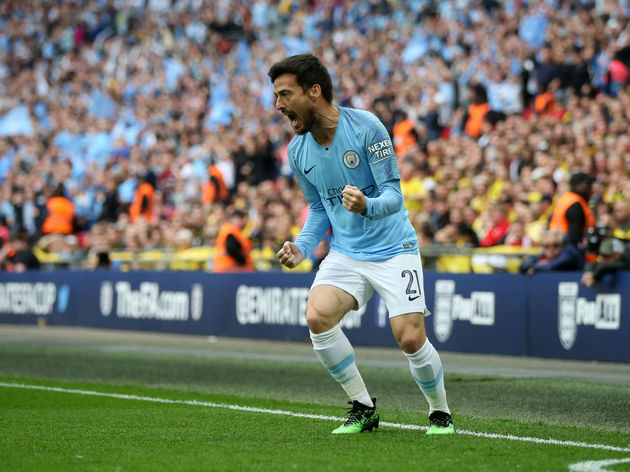 When Silva arrived on these shores nine years ago, no one gave him a chance. He was too small, too weak and too afraid. How very wrong he proved his doubters.

Purchased for £27m from Valencia, the diminutive playmaker took a little bit of time to settle, though no more than any other player competing in the​ Premier League for the first time.

Once he found his feet, there was no looking back. Silva, against all odds, would go on to become one of just a handful of players who could genuinely say that they changed the face of the game.

As we've mentioned, pundits and experts initially predicted him to struggle with the pace and physicality of the English game. Because of the 33-year-old's influence, few would dare say such a thing about his heir apparent Phil Foden, or any other undersized midfielder in the modern day.

"He reminds me of myself when I was young, especially how he is as a person. He’s very quiet but always there competing. He hates losing and that makes a good footballer." pic.twitter.com/iWgf2eIG87

Now, footballers built in the mould of Silva are feared, a total reverse of how they were once viewed. Who amongst the other candidates for the Premier League's 'Greatest Foreigner' gong can claim to have changed minds to such an extent?

The reason the veteran was able to do so was because of his utility; this is not merely some magician capable of splitting open a defence at will, this is also a fierce fighter, a tireless worker and a leader.

That is not to dismiss his skills in possession. No player looks as composed and assured on the ball as Silva, no mere mortal has the vision and creative flair to match him.

He is simply a delight to watch, regardless of what he is attempting to pull off. If this truly is the beautiful game, then the Spaniard's elegance and delicacy has taken him to the summit. Those are qualities that he honed in​ La Liga - where football is all about one's technical ability - the difference between Silva and his compatriots being that he incorporated the doggedness of the traditional English midfielder, too.

The ​City star's blend of both, unique when he first developed it, goes some way to explaining why he has been popular in the national setup, regardless of the coach.

Silva has earned 125 caps for Spain in an era in which they have dominated global football and, more to the point, one where they have enjoyed an embarrassment of riches in the middle of the park.

He has been competing with some of the finest playmakers in the history of the sport and more than held his own, collecting just eight and six fewer caps than Xavi and Andres Iniesta, respectively. Put in another way, that's 15 and 11 more than Cesc Fabregas and Xabi Alonso.

In a country with Andrés Iniesta, Xavi, Sergio Busquets, Xabi Alonso and Cesc Fàbregas at its disposal - David Silva made 125 international appearances for Spain.

To put that into perspective, that's more than Frank Lampard (106) and Steven Gerrard (114). pic.twitter.com/djCC2X1BNR

If a side like the Spain of the last decade are so eager to have Silva in the team, you have to say he's got something special about him. Or, more accurately, he has several special talents he can offer a coach.

One of those is no doubt his ability to set up teammates. Though Silva is only seventh in the Premier League's all-time assists list with 83, he has a better ratio than all bar two of those around him in the top eight and could realistically catch Dennis Bergkamp before he departs in 2020.

Toppling the 'Non-Flying Dutchman' would further help the World Cup winner's claim, given the high regard in which the former ​Arsenal striker is held, though he hardly needs such support. Whereas Bergkamp has lifted the Premier League trophy on three occasions, Silva has done so on four.

In fact, only one other non-​Manchester United player has been crowned champion of England more than the Citizens stalwart. ​Chelsea's John Terry took part in five triumphant campaigns, but he is evidently not in the running for this accolade. Of course, it's important to remember that this is a team game and no one individual can be accredited for a title victory, though Silva's tally speaks volumes about his durability and consistency.

He has been a mainstay in each Manchester City side that has finished top of the league. Nay, he has been an irreplaceable component, crucial to the team's style of play and success.

It wouldn't be an overstatement to say that he kick-started the current age of Sky Blue dominance, taking the team from mere challengers for ​Champions League qualification to genuine contenders for 'Old Big Ears'.

Along with Sergio Aguero and Vincent Kompany, Silva took City from stumbling over their own feet to a privileged seat at the top table of European football.

It could be argued that Cantona did the same for United - or even Didier Droga for the Blues - but they failed to make a similar impact on the Premier League as a collective, whereas we have seen how Silva reinvented the role of a midfielder.

These are things the Spanish international has done for the entirety of his time in Manchester. However, it is his more recent actions that have won the hearts of supporters from all clubs.

Mateo, his prematurely-born son, was not expected to survive beyond a matter of weeks, having to battle for each breath. And yet, he continues to grow and kick today, having likely inherited the bravery of his father.

During the infant's toughest struggles, dad managed to keep his performance levels up for Pep Guardiola, whilst also spending as much time as possible tending to Mateo. This is courage and endeavour, this is a winning mindset, this is the greatest foreign player in Premier League history.