Yes, it seems as if ​Ole Gunnar Solskjær can't get enough 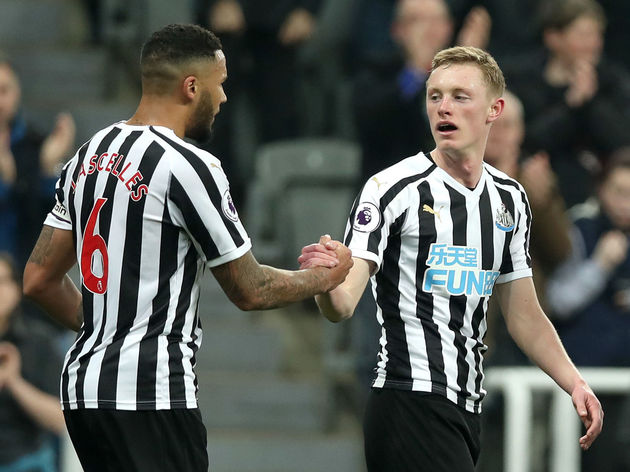 Longstaff had a breakout season in the league last year, and he only played nine games. How is this possible?

For one, his introduction to the Newcastle midfield came at a time when the ​Magpies were, as is tradition, fighting a battle against relegation. He had a 17-minute cameo against Liverpool for his first taste of Premier League action (where we got smacked 4-0), and then got the start in a 2-1 loss against Chelsea a couple of weeks later.

When Longstaff and McTominay meet each for 1st time at training pic.twitter.com/ZiCyG33iZq

But it was the next seven matches where Longstaff demonstrated that he had the cojones to whip a broken Newcastle squad into shape. Playing with a controlled ferocity and commanding presence, Longstaff's composure, passing and tackling (more on this later) created a sense of calm throughout the Magpies midfield, and it was his effort in the incredible 2-1 win against Man City - where he won the decisive penalty to put the Toon ahead - that had fans losing their collective minds.

Here is a 'man' (he is only 21 after all) who was born to wear the Newcastle armband.

There’s economics and then there’s that romantic rarity of modern football: the joy of a player blossoming and tearing up the league in his hometown club’s colours

A sale must be resisted ✊ pic.twitter.com/9XDnG2FvVy

Sure, nine games is a small sample size - but we saw enough of Longstaff's skill at finding his teammates last season to know that he can become an exceptional passer from a deep playmaker position in the midfield. Longstaff's work rate is off the charts, as evidenced by his hounding of Fernandinho in the aforementioned victory over Manchester City, which led to the penalty.

He's also an excellent tackler, capable of winning the ball cleanly whilst also sending a message to both opponents and teammates. That message? Don't f*#k with me.

Remember, the above is only for nine games, but he had a higher successful challenge rate (64%) and only eight fewer interceptions than Paul Pogba last season. Food for thought.

Now that is what you call a perfect start 

Sean Longstaff has his first Newcastle goal, and it took all of 57 seconds... pic.twitter.com/GZOz6YuRTo

At such a young age, Lonstaff has already shown that he's not afraid of playing  - and leading - on the big stage.

His heart and desire can't be questioned, his endurance is outstanding (the guy is like N'Golo Kante, he never stops running)