Juan Roman Riquelme: An Ode to the Lethargic Argentine Legend on His 41st Birthday

"If we have to travel from A to B, most of us take the six-lane highway & get there as quickly as possible. Everyone, except Riquelme.

He'd choose the winding mountain road, which takes him six hours, but that fills your eyes with scenes of beautiful landscapes." Jorge Valdano

June 24th is a hallowed day in Argentina. It is hallowed because it's the birthday of two of its greatest, and most contrasting, prodigal sons: Lionel Messi and Juan Roman Riquelme. As you can imagine, one needs more love than the other.

But perhaps not by as much as you might think. 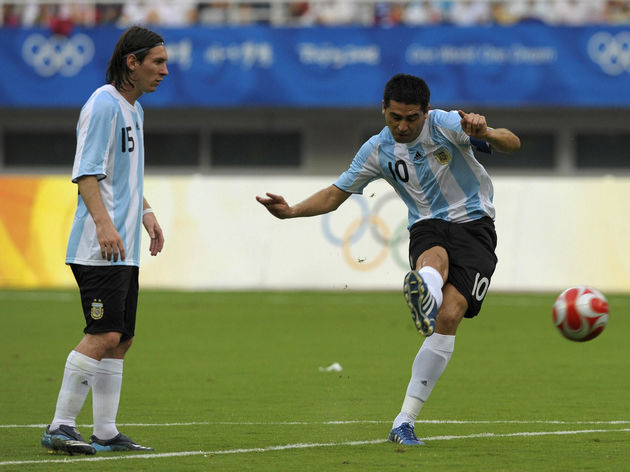 For, what Messi has in mainstream maniacal social media hype, Riquelme has in a subdued but cult-like worship across bars in Buenos Aires. Of course, the cult has now extended to the rest of the world, and by proxy social media, but it's nice to think that all the pro-Riquelme '24 de Junio' tweets are actually being written by the ageing moustachioed men in those same bars who, swirling their Malbec, have hijacked their grandson's account for one day to send their message of support for Juan Roman.

In reality, they're probably just the same second-screening, highlights reel-dependant scumbags as all of us, who never saw the man play live on TV, let alone at La Bombonera. But still, let a man dream. Because that's certainly what Riquelme did.

It is ironic that Messi's still-very-much-breathing-spectre should linger over Riquelme these days, because, just like Leo, Riquelme's first spectral presence came in the form of the king himself, Diego Maradona.

Branded, as I suppose all precocious number tens in the Argentine capital have been since 1986, as the 'New Maradona', it quickly became apparent that, with his languid, occasionally ungainly style, Riquelme was not so. He did not have the dynamism, the explosion, the mazy running style or the hair. He was something wholly different. But it didn't make them love him any less.

Happy birthday to the greatest to ever grace the Argentine league, Juan Román Riquelme. I'll go to my grave defending him. One of the most underrated to ever play the game. If you don't appreciate or enjoy Román, this sport is not for you. pic.twitter.com/wBQJtpyRQr

That word ungainly is perhaps unfortunate, because there is an inherent elegance to JRR's play, it's just inherently clunky too. This is the paradox that comes with a player who plays the game at such a devastatingly patient pace; when he is forced to run it seems unnatural.

From an early age, he had problems with his fitness and recovery, an ailment that irrevocably shaped his career, for better and worse. The downside meant that, when it came to his high-profile move to Barcelona in 2002, he was ill-prepared for the gruelling European schedule and under-appreciated and thus under-utilised by manager Louis van Gaal.

That ill-fated spell at Barcelona, where his status as the saviour from South America was quickly taken by Ronaldinho, was followed by a legendary one at 'lowly' Villarreal, where he became, for a time, the greatest playmaker in Europe.

Hazard: "For me, the artists are Zidane and Ronaldinho, Riquelme... And then there is Messi."#UCL pic.twitter.com/CL6czrjmuA

At Barca, he was remonstrated for being a slow, purely offensive player, who couldn't/wouldn't pressure the ball in defence and was ineffective on the break. At Villarreal, Manuel Pellegrini allowed him to be what he was, and he delivered.

That first season with the Yellow Submarine was followed by the 2006 World Cup, and it was here where those who had written him off in Catalonia and ignored his resurrection in Castellon ate their words.

Charged with pulling the strings for a team that desperately required some orchestration, Riquelme was a revelation. Two assists in three group stage games were quickly followed by standout performances against Mexico and Germany in the knockout rounds, the latter of which, despite eventual defeat on penalties (thanks to a miss from Esteban Cambiasso, his 72nd-minute replacement) is rivalled only by Zinedine Zidane's showing against Brazil as that tournament's greatest individual showing. 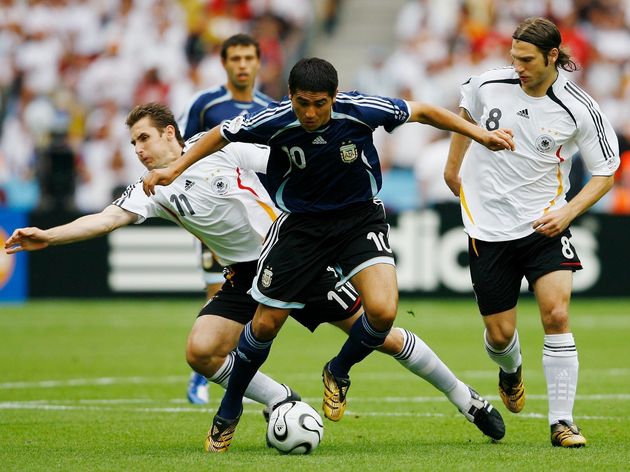 A return to his homeland came just a year later, where he saw out his remaining seven years with the two clubs that had made him who he was - Boca Juniors (where he won the Copa Libertadores at the first time of asking) and Argentinos Juniors.

His legacy is one that is hard to define, seeing as he was 'overshadowed' - but mainly just overlooked - at almost every turn, but his ability to find time and space where there was none was seen in the proceeding qualities of Andres Iniesta, Xavi and Sergio Busquets at Barca and, more recently, the effervescence of Mesut Ozil and the poise of Eden Hazard. Those comparisons can both flatter and deceive.

Indeed, it is in accordance with the overall misunderstanding of Riquelme that today, the date of his 41st birthday, there is a flurry of confusion surrounding his actual age - some have claimed he is 40 though his birth date, at least the one that we currently have access to, says 1978.

Clearly, there was, and is, a general ignorance around Riquelme's gifts. But that's so often the case with talents that go against the grain, that blur the parameters, that push the boundaries of the field they are in.

And, though it's undeniable to say that the man he shares his birthday with has since outperformed him, there is solace to be found for JRR in the fact that, when Messi first met the great man, he was starstruck to the point of speechlessness. Indeed, as Josep Maria Minguella, the famous agent who discovered Leo, detailed of that meeting: "Messi looked at Riquelme as if he were Jesus Christ."

As I sit here, swirling my Malbec, rewatching Riquelme's greatest hits, I can officially say, probably for the first and last time, I share something in common with Lionel.