Ianis Hagi: 5 Things to Know About Romania's Next Big Star

Romania have started the UEFA Euro Under-21 Championships in sensational fashion, picking up two wins from win games - despatching England 4-2 in the progress.

One of the stars of that outstanding performance was 20-year-old playmaker Ianis Hagi, who netted twice late on to help his side knock Aidy Boothroyd's team out of the competition at the group stages.

Now, you might think that names sounds familiar - and you're right, it does. So to find out a little more about him, we here at 90min thought we'd cobble together some things to know about the prodigal star.

His Father is Gheorghe Hagi 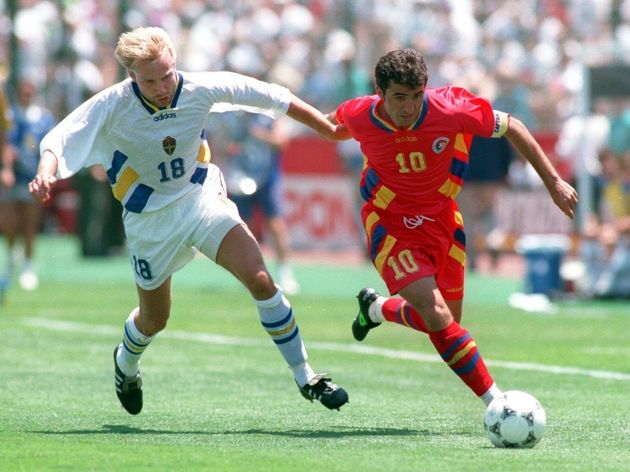 First up, the revelation of why you've heard of that name before - his father is the legendary Gheorghe!

Ianis certainly has a lot to live up to, as his father was considered one of the best players in Europe during the 1980s and 1990s - as well as Romania's greatest player of all time.

He played for both Real Madrid and FC Barcelona, as well as Galatasaray S.K, operating in the same playmaking role that Ianis does - donning the iconic number ten shirt.

Better still, father and son currently work together - as Gheorghe currently manages FC Viitorul Constanca, whom he founded in 2009. Ianis joined him there in 2014, and his style of play has been likened to his father - particularly as he's comfortable the ball at both feet.

He Moved to Fiorentina.....But it All Went Wrong During the 2016/17 season, Hagi joined Serie A side Fiorentina for €2m - but things didn't work out in Italy as he would have hoped.

Hagi only featured in two games before he returned home to FC Viitorul for a similar fee, where he has regained his confidence and form.

Such was his resurgence, Hagi was nominated for the prestigious European Golden Boy award that season - which is a nice tick box on his improving young résumé. With more experience under his belt, he could be ready to fly the nest again soon.

Arsenal Are Thought to Be Keen on Him Hagi could end up playing in the Premier League - if recent rumours linking him with a move to Arsenal have any truth to them.

The Gunners don't have a mountain of cash at their disposal, and Hagi would represent a much more affordable option for Unai Emery, with a current market value of around £10m.

He has also been linked with Sevilla, Ajax and Anderlecht in recent months, and development on a bigger stage is likely needed at this stage of career. Whilst it's risky to leave home comforts, it's most likely necessary for him now.

He Is Captain at FC Viitorul Hagi's father obviously has a lot of faith in his son - as he bestowed upon him the captain's armband at the tender age of 20.

He led his team to the Cupa Romaniei last season, earning qualification into the second qualifying round for next season's Europa League. They were in this year's competition too - with Hagi netting a single goal in four appearances.

Taking on such a responsibility doesn't seem to have affected Hagi's overall form - he scored ten goals and contributed six assists in 31 appearances last season, proving that he has what it takes to lead from the front.

He Has Impressed In The Euro Under-21 Championships

As alluded to in the introduction, Romania have started the Under-21 Euro's like a house on fire.

A 4-1 win over Croatia in the opening game was followed by a bizarre last 15 minutes goal fest against England - with Hagi scoring in both games.

France await in the final group game, and Hagi will be brimming with confidence heading into the contest - hoping that further impressive performances can bring further attention to him heading into the peak of this summer transfer window.