​Karen Bardsley: On Catching Herself on the Big Screen and Her Beautiful Bunion

And….breathe. Okay, so the Lionesses made that game perhaps a little more nervy than it needed to be, but we should all note three wins, only one goal conceded and top spot in the group is as good as it gets.

And whilst Ellen White was busy banging in the goals and securing player of the match at one end there was another performance that has provided England fans with probably their moment of the tournament so far.
​

"You know what was funny, I made the save and then turned around as we were setting up for the corner immediately after and that big massive screen was in my eye-line," England keeper Karen Bardsley said after the match against Japan.

Sometimes you just have to realise how lucky you are that you get to work with someone like this every day!! @klbardsley doing what she does best! BIG SAVES.. Huge win v Japan #Last16 #Lionesses gbeng pic.twitter.com/fr5PebDkvX 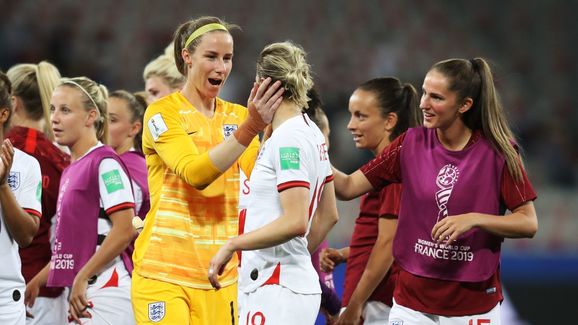 But that wasn’t her only big moment within the game, the save she made to stop Yuika Sugasawa late on was actually on paper a better save, at such a crucial point.

In case you missed it, let’s set the scene: The Lionesses are 1-0 up but are sitting deeper and deeper inviting the Japanese on, suddenly everything opens up and Sugasawa is racing clear of the defence... You know what? Bardsley tells this story better.

"Statistically it probably was [a better save than the first], she was coming straight down the middle of the goal, it opened up, I started to go one way and I thought, 'I better get long!'

"Everyone was taking the p**s out of me saying ‘Oh your bunion saved that, you better not chew your toenails!!!' It was just nice that we kept a clean sheet, because I hate it when we concede," she added.

When you make a save of that quality it’s almost irrelevant what part of your body it comes off.

Can't wait to see Karen Bardsley be asked after the game whether the goal needs to be smaller... What a performance she's had. Another brilliant save.#JAPENG #LIONESSES

Toenails, tail bones, armpit or the most beautiful bunion you’ve ever seen, wherever it strikes, denying an attacker eight yards out when you are the last line of defence is special. It’s not just special for an individual though, the confidence and lift it gives the rest of the team knowing that even if a player goes through on goal, your keeper is going to fly out and block their effort is worth its weight in gold.

Ellen White at the double. ⚽️⚽️@Lionesses at the treble. ✅✅✅

Karen Bardsley shows her international class. What a save!

Bardsley’s actions on Wednesday night unavoidably screamed louder than some of the thoughtless words we’ve seen since the tournament began. Like many others at the 2019 Women’s World Cup so far, her confidence and ability after years of hard work and coaching isn’t going to be undone because of a few thoughtless tweeters.

Another couple of performances of the kind she displayed against Japan, and she’ll be a very strong favourite for team of the tournament.