2018/19 is over and the next season is already on the horizon. With that will come ​the much-anticipated release of FIFA 20 and hours and hours of fun.

Considering Chelsea's transfer ban, their squad is already pretty much set for next season and we can already make some very early predictions for the Blues' FIFA rating's next season.

Given how the players have performed of late and their mid-season ratings refresh, here's how they are expected to be rated. Despite Ampadu's limited game time, he largely remained solid at the back. He showed some potential, but most of the time did not play against the hardest of opposition. A 69 seems a fair rating for an up and comer. ​Danny Drinkwater had an extremely uneventful season on the pitch, playing just 30 minutes in the Community Shield final and being named in the squad just one more time, against ​Derby in the EFL Cup.

He made more of a name for himself off the pitch, by being charged with drink-driving in April. It is fair to say this is a season that Drinkwater wants to forget, and his FIFA rating will probably reflect that as well. Mason Mount had a solid season on loan at Derby, and it seems as he might be recalled to Chelsea, especially if his manager at Derby Frank Lampard is given the gig at Stamford Bridge.

This small upgrade is only one step in Mount's rise. Willy Caballero's season will probably be remembered by most for being failed to be substituted on during the EFL Cup final. He had a fairly quiet season, by playing only once in the Premier League.

Caballero has done nothing to receive an upgrade, but it would be harsh to give him much of a downgrade, given the positive results, when he played, including the crucial 2-0 victory against Tottenham. Davide Zappacosta was another player who was limited to cup competitions. He did not do much that impressed and it seems as though he is largely limited to a wing-back role, which Chelsea no longer require. Emerson had an inconsistent season at left back. He occasionally impressed and showed signs of promise, but then often made defensive errors, when he was out of position, that led to goals.

However, he seems to have now overtaken ​Marcos Alonso in the pecking order and probably deserves a slight upgrade to show for it. ​Ross Barkley was another player that had his first full season as a Chelsea player. In the early stages of the season it seemed as though he was the goalscoring midfielder that Chelsea have lacked since Frank Lampard. His formed then dipped after New Year, and it never really recovered.

Disastrous moments like that clearance against ​Man City have been balanced by flickers of inspiration (see his free-kick against Malmo) but until Barkley improves his consistency, he is unlikely to be given an upgrade. Kurt Zouma had a much improved season at Everton, proving himself as one of the strongest defenders in the league, and surprisingly one of the fastest.

Will EA give him the strength and underrated sprint speed stats that he deserves? ​Marcos Alonso was heavily criticised by Chelsea fans throughout the season. He did have a position switch from wing back to full back, but this was his worst season in a Chelsea shirt, even losing his place to Emerson.

He is still a threat from set pieces and in general attacking play, but he should receive a minor downgrade, as he no longer is the best left back in the Premier League and does not carry the same threat as he used to. Tammy Abraham was the ​Championship's second top scorer helping ​Aston Villa to promotion with 26 goals. Returning from loan, it looks as though Abraham could well be finally leading the line for the Blues next season.

His pace is his biggest strength, and by being given a Championship Team of the Season card, it is almost certain that Abraham receives a significant upgrade. The biggest upgrade in the group. Callum Hudson-Odoi is Chelsea's crown prince, adored by the fans and seen as the heir to Eden Hazard's throne.

Since his mid-season refresh, where he was upgraded to 71, he is actually a very underrated player to use, given his four-star skill moves.

He definitely deserves an upgrade and 80 may seem generous, but he will almost certainly be a regular star next season, and this rating can only improve in the future. ​Ruben Loftus-Cheek is another Chelsea academy graduate who enjoyed a successful season, despite it being hindered by injury. Before his fitness issues, the England star had displaced ​Matteo Kovacic, in Sarri's preferred midfield three. Andreas Christensen rarely featured in Premier League matches, before ​Antonio Rüdiger got injured. He was rather average when he played, not doing anything special. However, nor did he make many notable mistakes.

He did not do enough to receive an upgrade, but his limited game-time may unfortunately mean that he will receive a downgrade. ​Chelsea's new £60m man, Christian Pulisic, comes with lots of potential, but his 2018/19 season has been full of injuries.

Given his large transfer fee and potential, it seems as though he might get an upgrade. 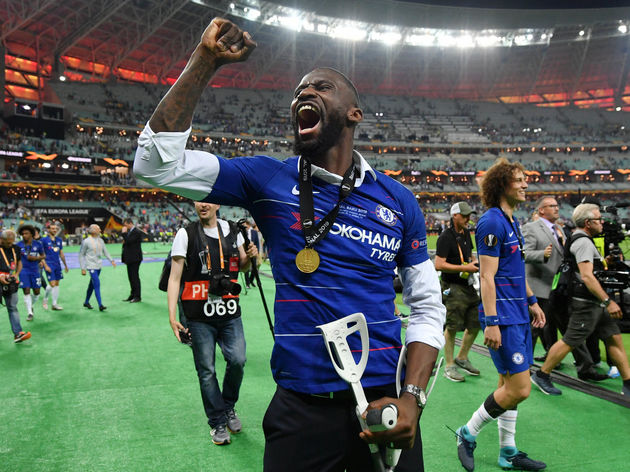 Antonio Rüdiger, like most Chelsea players, was inconsistent. He was at times imperious at the back, but often was humiliated in big games. Keeping the same rating for him, seems the most plausible. ​Olivier Giroud rarely started in Premier League matches. However, he was excellent in the Europa League, scoring 11 goals and helping Chelsea win the competition.

He cannot be given a downgrade surely, but his age and the fact that he was limited in the Premier League means he also probably cannot improve. ​Willian was disappointing throughout the season and it seems as though he would be sold if not for the transfer ban. His best performances came against lower league sides, such as Sheffield United in the FA Cup, but he failed to impress in big matches.

He was often reduced to the role of impact sub in the latter stages of Sarri's reign, which is also probably the best way to use him in FIFA, as his pace and tricks can help late on. ​Pedro may not have had his best season, but he was solid throughout and has recovered his starting position from Willian. He may be past his prime, but his solid contribution to the team and 13 goals, should get him the upgrade he deserves. Jorginho is arguably the most hated player right now by the Chelsea fans. It may be harsh to give him a downgrade as he has not done anything terribly wrong, but his addiction to sideways passing in an unremarkable campaign means an upgrade is unlikely at best. ​David Luiz has probably had his best season in a back four at Stamford Bridge. Yes, he has been the occasional liability, but he has become much more disciplined and his passing range is as good as its been.

He has improved throughout the season and is now one of Chelsea's most experienced players, and probably deserves the slight upgrade. The world's most expensive goalkeeper is probably known best for the drama in the EFL Cup final. However, he has proved that the doubters wrong, by saving helping Chelsea win two penalty shoot-outs. He also finished with 14 clean sheets in the Premier League, and has ousted ​David de Gea as Spain's number one.

Despite his tantrum, Kepa has proven to be a solid signing, with only room to improve and his FIFA rating should reflect that. Mr Consistent, Mr Versatile, Dave, Azpi or whatever you want to call him, ​Cesar Azpilicueta

However, he is no longer the same threat as he used to be going forward. ​N'golo Kante has undergone a position switch this season. Despite the criticism, he has adapted to his new role and is still one of the best defensive midfielders in the world, if not the very best. He still has enough energy to run up and down the pitching, making it seem as though Chelsea have two Kantes.

He has scored four goals this season, which is his personal best, and played the final of the Europa League injured. Kante deserves an upgrade as much as anybody.