Sir Alf Ramsey is number 45 in 90min's Top 50 Great Managers of All Time series. Follow the rest of the series over the course of the next 10 weeks. You can find Wilfred Laurence's all-time best XI for Sir Alf ​here.

Sir Alf Ramsey represented just two clubs in a 12-year playing career, and had just three jobs as a manager. He was the first England manager to work without the spectre of the International Select Committee hanging over him, and remains the only English manager to win the World Cup, making him the first to ever be knighted.

But he was also, by design, a difficult man to know, let alone understand. Having been described as an "Enigma" and a "lone wolf" in an ESPN Documentary, Ramsey himself affirmed: "I should be difficult to get to know."

And this was how he lived his life. When he wasn't consumed by tactics, he was a recluse, a role he took on full-time once his managerial days were over. But that doesn't necessarily mean you cannot glean a semblance of the man he was through his footballing exploits. After a 'solid' career as a 'reliable' right back at Southampton and Tottenham, in which teammates nicknamed him 'The General' for his motivational qualities - that's one 'class act' way from managerial buzzword bingo - Ramsey joined Ipswich Town in 1955, initially as player-manager, before quickly convincing the Third Division side that concentration on one craft was key.

Upon the announcement, Ramsey's England teammate and captain Billy Wright declared: "In appointing Alf to become their manager Ipswich Town paid a tremendous tribute to intelligent football - and footballers who think!"

There were doubtless many moments and tactics from his playing days that made a lasting impression on Sir Alf's managerial sensibilities, but two stick out. The first was the introduction of Spurs' infamous 'push and run' style (a forebear of Total Football) under Arthur Rowe, which propelled them to their first ever First Division title a year after promotion.

Indeed, it can't be a coincidence that, including Ramsey, three of the first six members of this Top 50 Managers of All-Time club played in Rowe's Tottenham side, with Vic Buckingham and Bill Nicholson rounding up the group.

The second was his final outing in an England shirt where, alongside that previous endorser Billy Wright at Wembley in November 1953 the Three Lions suffered their first loss on home soil, thanks to a 6-3 dismantling from Hungary and the 'Magical Magyars'. The game, which was later labelled the 'Match of the Century', irrevocably changed football in this country, forcing the English to get off the high horse they had constructed for themselves and reckon with their tactical deficiencies.

And so, with these experiences logged, he went to Ipswich with tactical innovations at the heart of his M.O.

In his first season, the Tractor Boys finished third, and a year later they were Third Division championships. For three seasons they consolidated this Second Division status, before mounting a promotion push in 1960/61, where they would win yet another league title. And then, tipped for relegation, Ramsey repeated the feat he had accomplished with Spurs as a player, becoming just the third side in history to record back-to-back titles in the First and Second Division.

Shortly after, England came knocking, and Ramsey's destiny was drawn up.

Throughout Ramsey's England career, there was a host of speculation that he had undergone elocution lessons to class up his speech.

Right away, his England was different. As the inaugural 'dictator' of English football - in that he made most of the selection decisions, you know, like a manager - he ushered in a new generation of talent. Indeed, after becoming known principally for getting the best out of so-called average players in his time in Suffolk, 'The General' was finally able to let his tactical (and by this point nearly metaphorical) hair down. Having pioneered the use of 'Wingless Wonders' at Portman Road - whereby attacking midfielders with a propensity to defend filled in for traditional wingers, proceeding to flood the middle of the pitch - he used it to devastating effect for the national side.

As Bobby Charlton explained upon a victory against Spain in a warm-up clash for the 1966 World Cup: "The Spanish full backs were just looking at each other while we were going in droves through the middle".

Now, when I said 'Ramsey's destiny was drawn up', I wasn't just being dramatic, for the man himself was the main architect behind this theory. Indeed, it's fair to stay a stir was caused when, in 1963, he brazenly proclaimed the team would win the World Cup in 1966.

But this was not merely based on baseless proclamations. There was complete method to this apparent madness, as (apparent chief Ramsey spokesman) Charlton later declared: "England were favourites in 1966, and Alf Ramsey's professional attitude was responsible. There's no question of that." 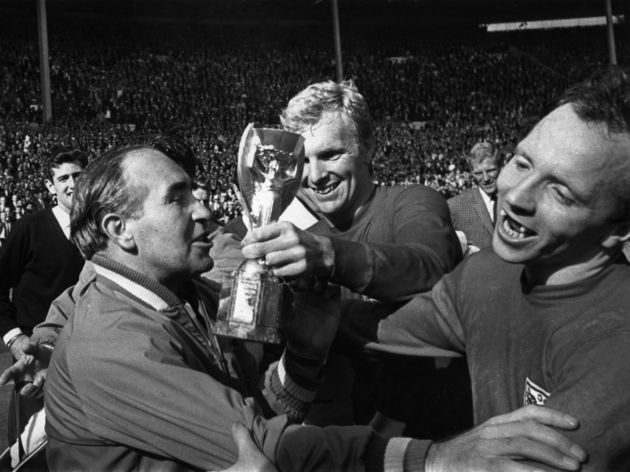 So, tactical renovations and attitudinal shifts were aplenty. But the Three Lions would need more than that to win their first Jules Rimet trophy.

Luckily, Ramsey had a lot left in the tank. Part of that 'professional attitude' came from his revolutionary attention to detail, especially when it came to physical betterment and match practice. Hell, players would even warm up in the area of the pitch they were going to play on.

He was also a vaunted man manager, and this was never clearer than in the aftermath of the final group stage victory against Mexico, in a 'Tale of Two Tackles', if you will. Firstly, Ramsey put his own neck on the line to defend Nobby Stiles, effectively claiming he would resign if he FIFA followed through on their calls for his suspension following an unsavoury challenge.

Secondly, after Jimmy Greaves was caught on the other end of a Stiles-esque challenge and ruled out for the next few games, he placed his trust in relative outside Geoff Hurst to assume his role.

After victories against stubborn Argentina (thanks to a winner from Hurst) and Portugal sides in the quarter and semi-final, his faith in Hurst was tested as Greaves recovered and the press clamoured for his return. However, in a controversial call, Ramsey stuck to his guns and Hurst retained his place. His faith would be repaid with the first - and to this day the last - ever World Cup final hat-trick, as England beat West Germany 4-2 after extra time.

Through it all, Ramsey had remained his usually stoic self, and was even heard muttering

'I wish you buggers could control yourselves' as the winning goals went in.

But, after his players had immersed themselves in the unprecedented celebrations, there was only one man on their minds. One man on their collective gratitude list. Stiles, who owed his participation to the coach, was quoted as exclaiming: "You did it, Alf, we'd have been nothing without you!" But, perhaps unsurprisingly, it was Charlton who put it best, explaining: "He was professional to his fingertips and as popular with the players as any manager I've ever seen. He was a winner and without Alf Ramsey England would not have won the World Cup in 1966. He gave us our proudest moment."

54 years later, those words ring truer than ever.