Luciano Spalletti finally brought Champions League football back to the Giuseppe Meazza after a six-year absence, but this summer's arrival of serial winner Antonio Conte could lift Inter to the next level.

For the first time since that treble-winning season, Inter possess the most talented coach in Serie A and look in a great position to compete with the very best.

Here are 6 reasons why they will challenge for the Scudetto this coming campaign. As a manager, he's been a success everywhere that he's been. Before he revived Juventus he'd lead both Bari and Siena to promotion from Serie B.

Prior to taking over at the Old Lady, a club he represented with distinction as a player, Juventus had been in the wilderness. Conte changed all of that and lead Juve to three consecutive Serie A titles.

He continued this success in London where he won a Premier League title and an FA Cup with Chelsea after leading the Italian national team to a respectable (if trophyless) showing at Euro 2016.

2. No Icardi? No Problem Already capped seven times by his country, Barella is hot property and it's thought that Inter will have to part with up to €50m to tempt him away from his beloved home town club. It looks like it could be money very well spent though. 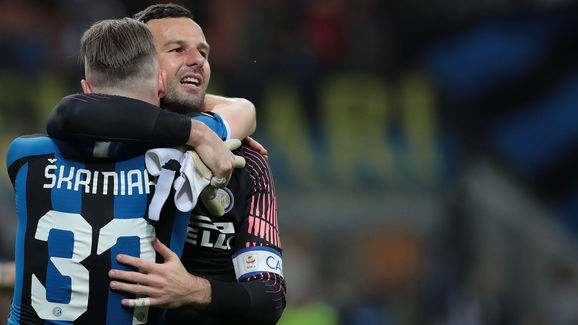 In front of him were the reliable duo of Milan Skriniar and Stefan de Vrij - one of Europe's best central defensive pairings.

Keeping this solid unit together will be vital if they are to challenge Juventus and the rest. To borrow a phrase from the Americans, "offence wins matches, defence wins championships." It's a time of change in Turin. Massimiliano Allegri departed after winning his fifth league title and Juve's unprecedented eighth in succession. Despite a comfortable Serie A campaign aided by the arrival of Cristiano Ronaldo, all is not rosy at the Allianz Stadium.

They were denied a shot at the Champions League trophy that they crave after a quarter-final defeat to Ajax. Hopes of another domestic double were ended when they lost to Atalanta at the quarter-final stage of the Coppa Italia.

6. Because No One Else Will Napoli were the best of the rest last season, still finishing 11 points behind Juventus. Despite possessing a talented squad and a highly respected coach in Carlo Ancelotti, it remains to be seen whether the Partenopei will have the resources to mount a serious challenge next time around.

Meanwhile, AC Milan are yet to appoint their new manager following the departure of Gennaro Gattuso. Former Sampdoria boss Marco Giampaolo is expected to replace him, an appointment that will surely fail to inspire the Milan fans.