Sven-Goran Eriksson is number 46 in 90min's Top 50 Great Managers of All Time series. Follow the rest of the series over the course of the next 10 weeks. You can find Andy Headspeath's all time best XI for Sven ​here.

There is an anecdote in Dietmar Hamann's autobiography The Didi Man that perhaps sums up the lasting image of Sven-Goran Eriksson better than any other.

The two had just spent a season together as player and manager at Manchester City under the stewardship, as turbulent as it was brief, of exiled former Thai prime minister Thaksin Shinawatra.

With the club's ownership and Sven's tenure both on their last legs at the end of the 2007/08 season, the Swede - who

'We are celebrating life’ 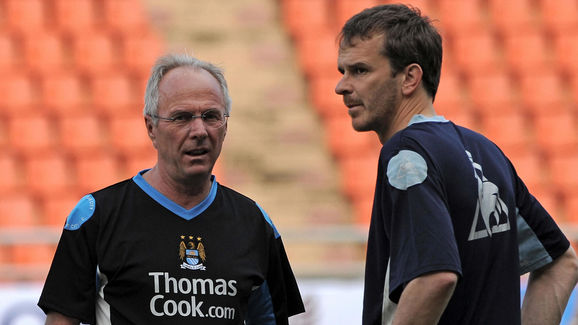 "One morning when I was on a sun lounger by the pool, he [Sven] walked towards me with a bottle of champagne and two glasses on it," Hamann wrote. "It was still only 10 in the morning. I looked up and said, ‘Boss, what are we celebrating?’ expecting him to make the triumphant announcement he was staying.

"He turned to me and smiled that gentle smile of his and took the air of a Buddhist philosopher, as he said, ‘Life, Kaiser. We are celebrating life’.

"With a glass of champagne in hand he stood and looked out towards the horizon, then spoke in that higgledy-piggledy Swedish accent: ‘You know Kaiser, I like this place. I think I will manage for another five years and come back here and live with two women. Yes. I think I need two beautiful women.’"

Prostrate on a sun lounger at the side of an infinity pool, speedo on, skin pinkening in the midday sun, toasting a pair of women at his flanks with a glass of Bollinger. This is quite probably the most 'Sven' image it is possible to imagine. Try to conjure up a more fitting one. I dare you.

From a distinctly average defender (by his own admission) in Sweden's second tier, one who was gradually attaining the appearance of a real-life Mr. Burns, Eriksson became football's unlikeliest superstar personality.

While it's impossible to speculate just how Sven's life would've worked out had he not taken an interest in the beautiful game, his hedonistic lust for life was certainly aided and abetted by being a damn good manager, who has spent over 40 years as a coach, lifting trophies and unfailingly living his best life around the globe.

To date (for he is still not retired) Eriksson has won five league titles in three countries (Sweden, Portugal and Italy), seven domestic cups and the UEFA Cup. He beat Sir Alex Ferguson's treble winners (and even ​signed a contract to succeed the legendary Manchester United boss). He also helped make superstars of talents like Alessandro Nesta and Juan Sebastian Veron, as well as tutoring the next generation of top managers in Diego Simeone, Roberto Mancini and current Lazio boss Simone Inzaghi.

A young Sven-Goran Eriksson as manager of Benfica in the 1990 European Cup final. What a suit! pic.twitter.com/acTrE0T9SK

While almost every corner of the globe from Sweden to Shenzhen, Lazio to Lancashire has their own very specific Sven memories and legacies (some less successful than others), it is Italy where he achieved greatness and, for a time at least, was the best manager on Earth.

It proved the best decision Sven would ever make in a footballing sense. While Jack Walker's Blackburn slid into gradual decline, Eriksson thrived like never before in Rome - King of the Eternal City.

At the turn of the century, Italian football was still the dogs' bollocks. Gazzetta Football Italia and James Richardson's dulcet tones had seduced British fans, while - with the Premier League yet to fully realise its economic potential - the best players in the world could almost exclusively be found at one of Serie A's seven sisters.

And Sven's remarkably simple football strategy of finding really, really good players, making them happy and putting them on the field in their right positions was perfectly suited to his era and environment.

Seven trophies in three-and-a-half seasons followed, with the 2000 Scudetto in Lazio's centenary year (only the second in their history) on the final day of the season, amid murmurs of attempted match-fixing on Juventus' part, the crowning achievement. The victory was made more remarkable due to the fact that the summer before Lazio had sold star man Christian Vieri to Inter for around £30m, leaving fans so upset that 25-year-old Elio Di Cristofalo threw himself under a train citing the transfer (and its cost) in his suicide note.

Still, owner Sergio Cragnotti and Sven spaffed a ludicrous amount of money (not by today's standards obviously, but back then it was a shitload) assembling a team of legendary proportions that would not simply fade away with the loss of one, albeit very good, striker.

A lineup including (90s hipsters may wish to collect themselves for this): Nesta, Fernando Couto, Sinisa Mihajlovic, Diego Simeone, Dejan Stankovic, Pavel Nedved, Veron, Mancini and Marcelo Salas, helmed by Eriksson deserves to be remembered along with any of football's super teams. Sven was on top of the world, winning and (presumably) shagging his way around Italy with care-free abandon.

Then, in January 2001, with England desperate for a high-quality safe pair of hands after the tactical ineptitude of Kevin Keegan and tact ineptitude of Glenn Hoddle, the FA approached Lazio to make Eriksson the new

He'd swerved the grey Lancashire mornings of Blackburn but couldn't turn down Wembley. It was a decision that ultimately,

Qualifying was mind-numbingly easy for arguably the greatest collection of England players ever to come together in a squad, but tactical rigidity, nerves, luck and the odd scandal went against them in 2002, 2004 and 2006. 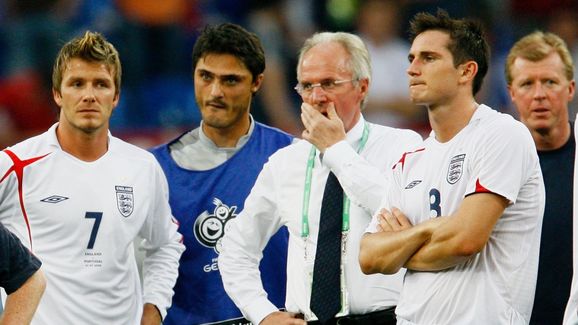 Germany were beaten 5-1 in Munich (if memory serves even Emile Heskey scored),

Post England, ​Man City followed, so too did Mexico, Notts County (remember that?!) and the rest. Sven would always have the glory days of Lazio, the UEFA Cup at IFK Goteburg, his European Cup runners-up medal with Benfica but his image had shifted from cool as a plate of cucumber slices super-manager to a figure of tabloid fun.

In the eight manager's jobs taken since leaving England after the World Cup in Germany, Sven has lasted more than a year only twice (both of those were in China), and he quickly earned an unwanted reputation as a mercenary willing to take any job. It later emerged that he lost £10m through the questionable actions of a former financial advisor.

As success on the field faded, Nancy​Roxy the Romanian gymnast, a Panamanian nightclub dancer​'white magic' faith healer from Italyvery

This young boy had his hair cut in a homage to his hero, Sven Goran Eriksson. I believe he was taken into care. pic.twitter.com/Ef7nDCqT15

Hints at sex addiction were made by his most famous ex-partner Dell'Olio, while Ulrika teased the press with tales of their affair, testing the public's gag reflex with the following sentence.

"When we were in the bedroom he always talked dirty in this singy-songy broken English. I tried to ignore it," she told The Sun.

Meanwhile, Marisa Cauchi claimed her four-year relationship with Sven ended after she found out that he was also seeing five other women at the same time.

Now a 'consultant' for the Philippines national team after a fleeting tenure as manager, Sven told Expressen in 2017 that: “I had the most fun in England, but you’d have paparazzi outside the mansion, sitting in boats or lying in the bushes and taking pictures. That part wasn’t so fun."

“For example, I was never unfaithful to Nancy because we weren’t married.

"That was my reasoning, but the English press didn’t see it that way. What can I do? I fall in love easily.”