Despite an overall anticipation that the USWNT would secure their first three points in effortless fashion, ​outrage spilled out on social media

In the aftermath of the Thailand's 13-0 thrashing, the USWNT were forced to justify their momentous victory, insisting that every goal and every celebration was important to their World Cup campaign.

There are countless reasons why this US Women's team should not have to explain their  the quality of their performances. Although, it should be noted, it must mean something special when people are complaining about you being "too good".

This isn't to say that we cannot feel sympathy for Thailand. Defeat is always a bitter pill to swallow, particularly ones which highlight the vast chasm of quality between two sides.

But the US women should not be shamed for their ruthlessness. They are not in this World Cup to consider the opposition's hurt feelings. More often than not, Thailand are at the receiving end of harsh results - they know how to

13-0 sends out a powerful message, not only to those in Group F, but to the rest of the competitors in the tournament. The USWNT now have momentum on their side. Their top attacking players, Morgan, Lavelle, Rapinoe and Horan, to name  a few,  will have confidence in their goal-scoring ability going into their group stage matches against Chile and Sweden.

Another issue voiced widely online was the US women's goal celebrations. 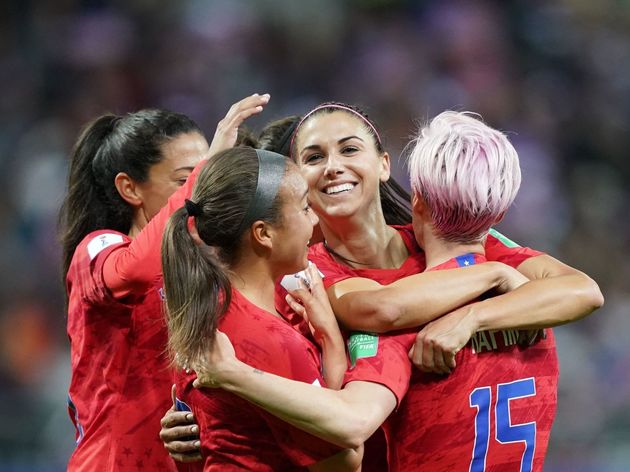 The US have dominated women's football for some time. To make it into their 2019 World Cup Squad is a tremendous achievement. Each US player has had to work extremely hard to eliminate the competition within America's broad talent pool and reassure Jill Ellis that she made the right choice in selecting them to represent their country at the World Cup.

These players should not have to face unpleasant judgement regarding their goal celebrations. America's players such as Pugh, Mewis, Horan and Lavelle  are living their dream, making their debut World Cup performances, a significant milestone in their footballing careers. Who is anyone to decide how they should celebrate?

For all that have issue with many goals: for some players this is there first World Cup goal, and they should be excited. Imagine it being you out there.This is your dream of playing and then scoring in a World Cup. Celebrate.Would you tell a men’s team to not score or celebrate?

Alex Morgan, the hero of the night, stated in a post-match interview that it was important  the team celebrated together. Every time the ball hit the back of the net, the team came together to celebrate. This creates a positive energy surrounding good attacking play. The 8th and 11th goals, both scored by Morgan, demonstrated such technical brilliance that it would be criminal not to celebrate.

13-0 is not a scoreline to be ignored. It should be both admired and feared. Admired by spectators and media corporations, this extraordinary result helps to raise the profile of women's football by placing it in the headlines. Feared by any teams in this year's World Cup who will face the difficult task of putting the USWNT's attacking momentum to a halt.