Claudio Ranieri: A Ridiculed Tinkerman Who Masterminded One of Football's Greatest Ever Achievements

​Claudio Ranieri is number 48 in 90min's Top 50 Great Managers of All Time series. Follow the rest of the series over the course of the next 10 weeks. You can find ​Tob​y Cudworth​here

When you think of Claudio Ranieri, you can't help but feel happy.

A man whose infectious enthusiasm for football and radiating, beaming smile brings warmth, and a feeling of content to all those encounter him.

But as loved as he is now, for many years Ranieri was often a man who garnered a degree of sympathy, rather than admiration for anything he had achieved in the game. Particularly during his managerial career. That was until three years ago, when Ranieri orchestrated one of the most incredible underdog success stories known to professional football.

An underdog story that even now seems unfathomable.

An underdog story that will, in all probability, never be achieved again.

An underdog story that saw plucky ​Leicester City rise above the cash-rich Premier League elite, despite being overwhelming favourites for relegation.

This is the story of the 'Tinkerman' Claudio Ranieri.

Ranieri's managerial career began in the lower divisions of Italian football, at the conclusion of a 13-year playing career.

During that time, Ranieri had made 363 appearances as a defender for Roma, Catanzaro, Catania and Palermo. Though he was never rewarded with international honours, he was regarded as a competent defender in Italian football, and earned promotion four times during his career. So it was little surprise in 1986 that he took all of his playing experience into the field of management - where he spent a season in charge of Vigor Lamezia and Puteolana, before leaving for his first job of note at Cagliari.

It was there that Ranieri began to forge his reputation as a manager, and it wasn't long before he led I Rossoblu to back-to-back promotions - taking the club into Serie A. Along the way, he won a Coppa Italia Serie C title and his team soon became known for their versatile ability to change shape and formation.

Ranieri's success led to his appointment in 1991 at Napoli, who despite winning ​Serie A during the 1989/90 season, were facing a host of financial difficulties.

His time in Naples was ultimately an unsuccessful one, and he parted company with the club midway through his second season in charge. He is, however, fondly remembered for introducing a talented young player known as Gianfranco Zola - who he would encounter again later in his career - into the first-team fold. Ranieri moved to Fiorentina next and again he found instant success, leading I Viola to the 1993/94 Serie B title. The club's progression continued nicely over the next two seasons, and Ranieri scooped the Coppa Italia and Supercoppa Italiana crowns in 1996.

Notable players under his management at the time included Gabriel Batistuta and Rui Costa, who both enjoyed legendary careers in the game.

After managing domestically for 11 years, Ranieri took on a new challenge in 1997 when he took over at Valencia. Charged with reinvigorating the sleeping Spanish giants and introducing a different brand of football, Ranieri took the bull by the horns and again made an immediate impact.

Champions League qualification and victories in the UEFA Intertoto Cup and Copa del Rey added to his already impressive résumé.

Again, he was credited with the emergence of several young stars at the Mestalla, and oversaw the emergence of Gaizka Mendieta, who earned a reputation as one of the best midfielders in the world after working under Ranieri. A short and unsuccessful stint at Atletico Madrid followed, before Ranieri came to further prominence when he took the reins at ​Chelsea in 2000.

Unable to speak English at the beginning of his tenure, Ranieri soon forged a jovial relationship with the British press as he attempted to grasp the language - though rumours of his inability to communicate with his players on the training ground were soon doing the tabloid rounds.

Ranieri was tasked with what's commonly known in the world as an 'out with the old, in with the new' job, and soon began to bring a number of young, established stars to Stamford Bridge.

There was one player, though, who despite heading into the latter part of his career, remained a central figure to Ranieri's first team plans. That player was Gianfranco Zola.

With Zola alongside him, Ranieri began to slowly knit together a Chelsea side that would be capable of challenging for the Premier League title. Frank Lampard and John Terry were two young English players who thrived in the first team, partly because of Ranieri's unwavering belief in their abilities, and Jimmy Floyd-Hasselbaink continued to score goal after goal. 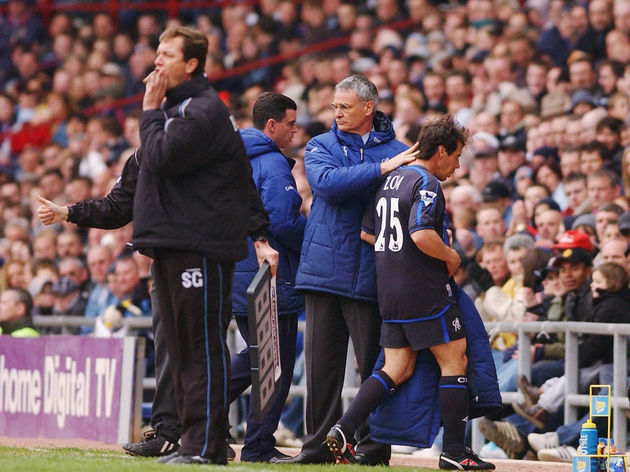 It was around this time, however, that Ranieri was first dubbed the 'Tinkerman' by the press. Accused of rotating his side too often, he was put under the microscope when Chelsea finished fourth in the 2002/03 Premier League season - an improvement on the Blues' opening two campaigns under him.

Before long, Chelsea were bought by Russian oil tycoon Roman Abramovich and Ranieri was left hung out to dry by a success-hungry owner.

While jobs interviews and restaurant meetings to replace him as boss were being conducted in the public eye, Ranieri kept himself to himself and maintained the utmost professionalism - focussing on the job in hand until he was told otherwise.

Even though he was on the cusp of losing his job, Ranieri went on a spending spree during the summer of 2003 thanks to Chelsea's new-found wealth. Damien Duff, Joe Cole and Claude Makelele were just three of the marquee signings who arrived in west London, with the latter going on to re-define and glamourise the anchor role in midfield for years to come. A second placed finish on 79 points followed, as well as a Champions League semi-final appearance. But it wasn't enough - Ranieri was sacked. He would later publish a book called 'Proud Man Walking' - an indication of exactly what he went through during his final season at the club.

Over the next decade, Ranieri turned up at a number of clubs for short spells in charge. Although he was a loveable character, his reputation was somewhat tarnished because of his ill-fated final year at Chelsea, and his appointments were often met with skepticism.

His most notable managerial spells during this time came at Juventus, where he helped stabilise and rebuild the club's reputation in Serie A after the Calciopoli match-fixing scandal had seen them relegated from Italian football's top flight, and at Monaco - where he led the club back into Ligue 1.

With his managerial flame appearing to burn out, Ranieri was then surprisingly appointed as Leicester City manager after a short, disastrous spell in charge of the Greek national team. Again, his appointment was met with ridicule - and disdain among some sections of the media.

"If Leicester wanted someone nice, they've got him. If they wanted someone to keep them in the Premier League, then they may have gone for the wrong guy." Marcus Christenson, The Guardian (July 2015)

Instead, his appointment at King Power Stadium turned out to be a masterstroke. Billed as relegation certainties, the Foxes took everybody by surprise when they flew out of the traps and made a wonderful start to the season.

Pace, boundless energy and an insatiable desire to hunt down the ball seemingly took the Premier League by surprise, and with the protection of N'Golo Kante - a man who 12 years on was filling the exact role that fellow countryman Makelele began to revolutionise - they had an engine like no other.

Ranieri's side showed no fear as the so-called Premier League big guns fell by the wayside, and refused to acknowledge or feel the pressure that they should most certainly have been encountering. 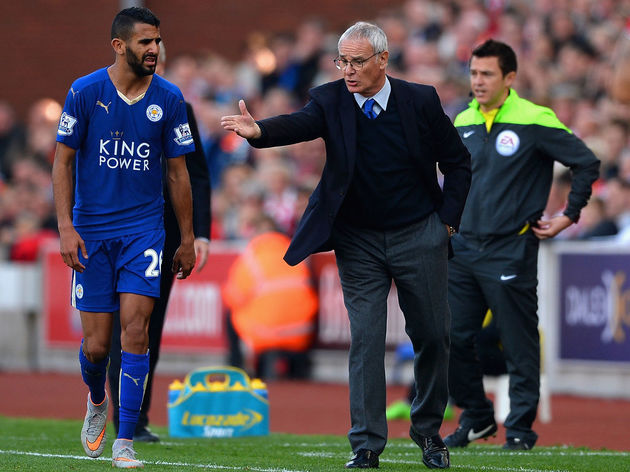 Ranieri even found time to coin his own catchphrase - revealing to the press during a media briefing that he rang a bell in training to keep order in training - called 'dilly ding, dilly dong'. This soon caught on and to this day remains a popular saying around the club. That moment, along with a host of others, culminated in the impossible.

Led to success by the likes of Jamie Vardy and Riyad Mahrez, Ranieri had masterminded one of, if not the, biggest success stories in football. A team who 12 months earlier had scraped their way out of relegation danger, were suddenly champions of England - earning legendary status within the game.

"At the start of this piece I said that no one likes to be wrong. Well, I was wrong about that too. I’ve enjoyed every minute of being embarrassingly wrong this season. Leicester is the best story that could have happened to football in this country, their triumph giving hope to all of us who want to start a season dreaming that something unthinkable might happen." Marcus Christenson, The Guardian (May 2016)

After experiencing the most incredible high, you would think that Claudio would go out on the maximum high. But not Claudio. Not the man who has dedicated almost half a century of his professional life to football. Since then, Ranieri has continued the nomadic managerial life that helps make him who he is.

A unique, loveable character, willing to go anywhere and willing to try and help wherever he can. There really will never be anyone like Claudio Ranieri.