​Switzerland will contest the inaugural Nations League Finals clash on Wednesday night, as they face hosts Portugal in the first semi-final in Porto.

Manager Vladimir Petković is without forward Breel Embolo, who had to pull out of the 23-man squad after feeling pain in his left foot. He was replaced by Basel starlet Noah Okafor, who at 19 years old becomes the first player born in 2000 to be called up to the senior team. Yann Sommer (GK) - Assuming his place in goal, Sommer will earn his 46th international cap on Wednesday. The Borussia Mönchengladbach goalkeeper has been outstanding all season for club and country, as he hopes to extend his fine form into the Nations League Finals.

Kevin Mbabu (RB) - With Nati captain Stephan Lichtsteiner left out of Petković's squad, Mbabu will get his deserved chance at right back. The 24-year-old, who ​just signed for Wolfsburg, had a wonderful season with BSC Young Boys as he helped them retain the Swiss Super League title.

Manuel Akanji (CB) - Akanji will start as one half of Petkovic's preferred centre back partnership, earning his 16th cap. The ​Borussia Dortmund defender will be disappointed in missing out on the ​Bundesliga title, but will be eager to put in a solid display for Switzerland.

Fabian Schär (CB) - One of the ​Premier League's finest new additions, Schär will play a critical role on Wednesday. The in-form ​Newcastle centre back has been fantastic all season, and will need to be at his very best to keep Portugal's star man ​Cristiano Ronaldo quiet in Porto.

Ricardo Rodríguez (LB) - ​Milan's Rodríguez will complete Switzerland's back four. The 26-year-old has been a regular among the Swiss defence, and he will certainly be one to watch as he controls the left flank. 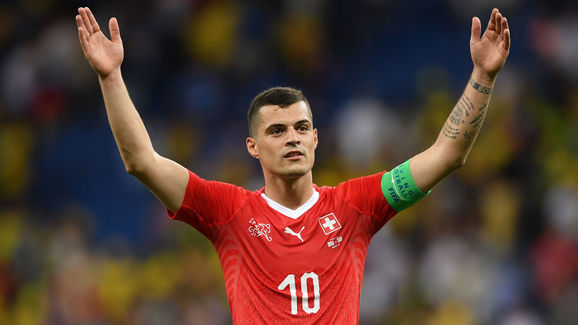 Granit Xhaka (CM) - Xhaka will once again captain the Schweizer Nati on Wednesday, as he has done in Lichtsteiner's absence. The ​Arsenal midfielder could be the first ever Swiss player to captain the national team to a major honour, as he hopes to add to his 11 international goals.

Denis Zakaria (CM) - Mönchengladbach youngster Zakaria will continue his partnership with Xhaka in the heart of the midfield. Since coming in for the retiring Valon Behrami following the World Cup, the 22-year-old has excelled since becoming a first-team regular for the Nati.

Remo Freuler (CM) - Freuler will drop back into central midfield against Portugal, as Petković adopts a three-man midfield. He has had a season to remember, scoring his first international goal and helping his club Atalanta qualify for the ​Champions League for the first time ever. ​Steven Zuber (RW) - Petković will opt for Zuber on the right wing, who has been one of Switzerland's best players recently. The midfielder on loan at Stuttgart got a goal and an assist in his last two international appearances, as he hopes to continue his fine international form.

Haris Seferović (FW) - Seferović is certain to start up front, as he remains in the form of his life. The Benfica talisman scored 27 goals for his club this season, and has five goals in his last five appearances for Switzerland including a stunning hat-trick against Belgium in November.

Xherdan Shaqiri (LW) - Shaqiri will pose one of Switzerland's biggest threats on Wednesday, with his 80 caps making him the most experienced player in the squad. The 27-year-old comes off the back of a stellar season, helping ​Liverpool to their sixth Champions League title.