​Jack Butland could be given another opportunity in the Premier League, with Bournemouth seemingly keen on a swap deal for the Englishman; a deal which would see Asmir Begovic going the other way.

Butland was relegated with Stoke City back in 2018 and has since had to ply his trade down in the Championship. However, the England international has made it clear that he intends to play in the Premier League again. 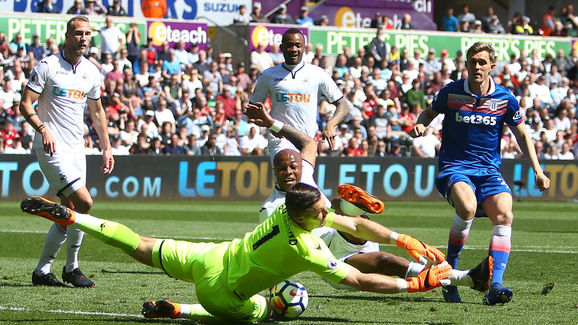 ​The Times report that ​Stoke City have put a £30m price tag on the shot-stopper, but Bournemouth will be hoping to lower that fee significantly by including Potters old boy Asmir Begovic in with the deal.

The 26-year-old told talkSPORT this week: "I always have and I always will give everything for Stoke City, but I need to be in the Premier League. I've tried to help the club back there but I know where I need to be to be in this [England] squad."

Publicly expressing his desire to play in England's top flight once again will certainly help Bournemouth's cause, as the last thing the Potters need is a player who doesn't want to be at the club.

The 26-year-old is now represented by new management – the same manager as Wayne Rooney, Paul Stretford. It seems as though the Bristol born number one is determined to get his move back into England's top flight this time, whether it be to the south coast or elsewhere.

"I need to be in the Premier League."

"If something arises that is the right thing for me, I'll have to seriously consider it."

Jack Butland to @talkSPORTDrive on a possible move away from Stoke City. pic.twitter.com/x6QOpLHONp

However if Stoke do stick to their guns, the Sun are reporting that Eddie Howe could turn his attention to out of favour Liverpool keeper Simon Mignolet.