Aston Villa are back in the Premier League after a three-year absence following victory over Derby in the Championship playoff final.

The Villans were relegated from the top flight of English football at the conclusion of the 2015/16 season, where a shambolic campaign ended with a paltry three wins in 38 league games and a points tally of just 17 points.

Ever since, Villa have been trying to get back into the big time and narrowly missed out last year when they lost in last year's Championship playoff final by the odd goal to Fulham. 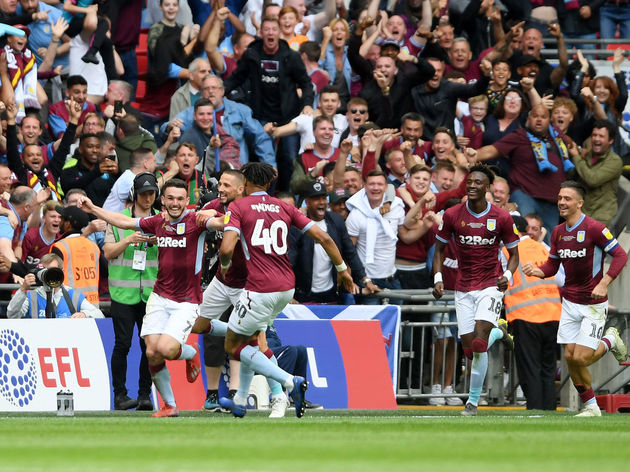 They're celebrating success this time around, though, with Dean Smith's style sealing their place back in the big time, as well as a £170m windfall, after a tense 2-1 win over Frank Lampard's Derby at Wembley.

Goals from Anwar El Ghazi and John McGinn were enough to fire the Villans to glory, with Jack Marriott's late strike for the Rams no more than a consolation goal.

Promotion caps a memorable season for ​Villa, and for Smith in particular - who took charge at Villa Park after Steve Bruce controversially left his post at the beginning of October. In taking over, Smith left high flying Brentford to take the role and initially struggled to embed his brand of football on his players, despite his and assistant manager John Terry's best efforts.

But a remarkable run of form, that began at the beginning of March, saw Villa rack up a club record ten wins in a row; firing them into the playoff places and giving them another chance at playing in the richest game in English football.

Now, having beaten West Brom on penalties in the semi-final, Villa are back where a club of their stature belongs after beating Derby - in the ​Premier League and ready to bring top-flight football back to one of the Midlands biggest clubs.